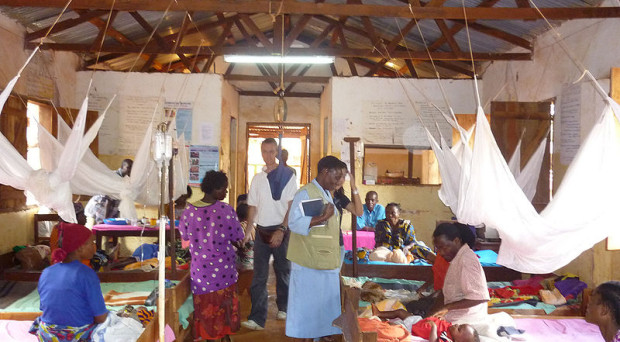 It is thought that almost half of the world’s population is at risk of malaria. Although the disease was responsible for an estimated 584,000 deaths in 2013, malaria is a preventable and treatable infection, and four previously-affected countries have been certified malaria-free in the past decade. The new post-2015 strategy aims to reduce malaria deaths by 90% before 2030, and eliminate the infection from a further 35 countries.

To work towards future targets for malaria elimination, improved control strategies and better implementation in the world’s poorest countries are needed.

Nsanzabana and colleagues conclude that using fixed-dose AS-AQ should increase antimalarial efficacy, but caution that resistance to artemisinin-based therapies is a major concern, so should be monitored carefully when considering combination therapies such as AS-AQ.

Artemisinin resistance has recently emerged in Plasmodium falciparum malaria parasites in South East Asia, prompting concerns that resistance could spread to other regions. Greater understanding of the mechanisms involved in therapy resistance are essential to maintain antimalarial effectiveness; a recent study shed further light on the underlying processes by identifying mutations in the malaria parasite’s genome that are linked to resistance. Analyzing samples from 15 locations across Africa and Asia, the researchers showed that mutations in the kelch13 gene in the malaria parasite’s DNA are linked to resistance. Lead author Olivo Miotto highlighted that:

“Artemisinin is the best drug we have had for a very long time, and we want to continue this success story. And for that its effectiveness has to be protected and sustained.”

In a commentary published in BMC Medicine, Carol Sibley discusses the evolution of artemisinin resistance in P. falciparum malaria parasites, emphasizing that the new genetic insights must now be turned into practical tools to identify artemisinin-resistant parasites to contain their spread and maximize the clinical efficacy of artemisinin-based combination therapies (ACTs).

The development of an effective malaria vaccine offers tremendous potential for elimination of the disease. However, the complexity of the malaria parasite makes vaccine design extremely challenging, and there is currently no licensed vaccine .

The most advanced vaccine candidate against P. falciparum malaria is RTS,S/AS01. The latest results from the final clinical trials of the RTS,S vaccine have been published today, showing that immunization was 46% effective when infants aged 5-17 months were given three doses of the vaccine.

At the LSHTM malaria seminar, Brian Greenwood explained that it is unlikely that the first generation of malaria vaccines will provide full protection against infection, and discussed how partially efficacious vaccines could be applied. Greenwood described how a vaccine providing sustained modest protection could be given to at-risk groups in areas with persistently high levels of malaria transmission, whereas a vaccine giving high levels of protection over a short timeframe could be useful in elimination campaigns.

The implications of licensing a partially efficacious malaria vaccine are discussed in an opinion article published in BMC Medicine by Freya Fowkes and colleagues. The authors recommend that appropriate methodology is essential to assess the efficacy of malaria vaccines in clinical trials, and that the scientific community should plan how the licensing of partially-efficacious first-generation vaccines will advance the development of second-generation vaccines.

Mechanisms of immunity and vaccine design

Understanding human immunity is extremely valuable for informing and advancing the development of highly efficacious and long-lasting vaccines against malaria, and it is exciting to see some major progress being made in this important area in recent times

Looking to the future of vaccine design, better understanding of interactions between malaria parasites and infected individuals is required. A number of recent research articles published in BMC Medicine’s Combating malaria: research, prevention and treatment collection have provided novel insights into these interactions.

In an analysis of data from nine RTS,S P. falciparum vaccine trials, Michael White and colleagues showed that anti-circumsporozoite protein antibody titres in vaccinated individuals and transmission intensity of the parasite are linked to malaria protection, which could explain the variations seen in vaccine efficacy.

Providing more insight into the immunological mechanisms behind protective immunity to P. falciparum malaria, Faith Osier and colleagues revealed that opsonic phagocytosis contributes to immunity, which could be measured to assess vaccine response and population immunity. Furthermore, Ulrich Terheggen et al. reported that antigenic diversity of the AMA1 protein in P. falciparum malaria is restricted to three alleles, suggesting that a future multi-allele vaccine targeting limited AMA1 variants could confer protection against malaria.

“Understanding human immunity is extremely valuable for informing and advancing the development of highly efficacious and long-lasting vaccines against malaria, and it is exciting to see some major progress being made in this important area in recent times.”

Taken together, new insights presented at the LSHTM seminar and the latest published findings highlight great progress that has been made in defining the optimal treatment strategies, monitoring resistance, and developing vaccines as we move towards new goals to reduce the global burden of malaria.

BMC Medicine’s Combating malaria: research, prevention and treatment article collection, guest edited by James Beeson, remains open for submissions. If you have any research you would like us to consider for inclusion in this article collection, please email bmcmedicineeditorial@biomedcentral.com.