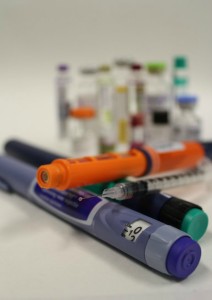 Insulin analogues are molecules very similar to regular insulin but with improved pharmacokinetic parameters. These compounds are used by diabetic patients to regulate their blood glucose levels.

Long- and short- acting insulin analogues have been developed so that these levels can be tuned precisely during the day and do not fluctuate too much after physical activity or food intake.

Currently, compounds for long-term use are being tested with lifelong in vivo experiments in rats and mice at the maximal tolerable dose with the emphasis on statistics.

However, rodents are not a golden standard. They are more sensitive to the pharmacotherapies than humans, so half of all long term drugs tested induced human irrelevant tumours in the last phase of the rodents’ life.

In 2002, the European Medicine Administration proposed new testing strategies for insulin analogues (EMA, 2002), in which the preclinical safety evaluation of these biotechnology-derived pharmaceuticals should focus on the mechanisms of action of the expected carcinogenic effect. Besides that, the use of adapted animal models is encouraged to increase the human clinical relevance of these chronic rodent experiments.

In our study we have used a specific mouse model, p53R270H/+WAPCre, so named due to a point mutation in the tumor suppressor p53 gene; a gene that corresponds to the Li Fraumeni cancer syndrome genetic hotspot in humans.

Due to the WAPCre system this point mutation only becomes active in the mammary gland of the mouse, by which this strain will develop spontaneously human relevant mammary gland tumors at the age of around 1 year.

We frequently exposed these mouse models to insulin-like molecules. Expression of the tumor was significantly decreased after frequent injection of two model compounds, AspB10 and Insulin like growth factor-1 (IGF1), both associated with mammary tumors in rats.

AspB10, also known as X10, was an early insulin analogue with a strong potential to start cell division, due to the enhanced IGF1R binding affinity. IGF1 is the natural ligand of the IGF1R, this receptor is well known to play a major role in cell division signalling.

Insulin glargine has an enhanced binding affinity towards the IGF1R and an increased cell division potential in in vitro assays compared to regular insulin. Few epidemiological studies indicate that insulin glargine has a carcinogenic potential, while rodent studies contradict these findings. We have chosen to test glargine in our model.

In our study, glargine treatment had no effect on mammary gland tumor development, because it is rapidly degraded into active metabolites with low cell dividing activity.

Our pathology screen revealed that tumor type in this mouse model was not affected by regular stimulation with various insulin-like molecules. However, receptor levels (both the insulin receptor and the IGF1R) were affected as revealed by protein expression analysis.

Furthermore, the activity of a specific enzyme involved in cell survival and proliferation, named AKT, was elevated as compared to the control group. Most intriguingly, only chronic glargine, X10 and IGF1 treatment led to a high level activation of yet another enzyme that is involved in cell division, named ERK, while neither insulin nor the control treatment had any effect. This suggests that the latter increased enzyme activity in mammary gland cells may contribute to tumor formation caused by repeated treatment with insulin analogues.

Since glargine has been on the market for over a decade more research is needed to determine between insulin glargine and the possible risk of developing cancer.

Currently we apply RNAsequencing-based transcriptomic on all tumors to reveal differences in gene expression as well as the tumor mutation spectrum in the various treatment groups.

Such an analysis is essential for understanding the mode of action of insulin analogues and determining whether users are at any increased risk of developing cancer. We hope that this type of research contributes to the continuous safe use of insulin analogues in large population of patients.

Bas ter Braak is a PhD candidate at the Leiden Academic Centre for Drug Research (LACDR), which is part of the Leiden University. Within the cancer research field he is studying the mitogenic and carcinogenic potential of growth factors.