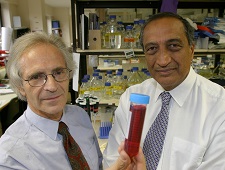 Rheumatoid arthritis is a common, chronic, painful and disabling autoimmune disease that affects over 21 million people worldwide. In the mid-1980s, Professors Maini and Feldmann discovered the first treatment for it using monoclonal antibodies, which are genetically engineered natural defense molecules, against the pro-inflammatory cytokine TNFα – this became known as ‘anti-TNF’.

Not only was this a novel treatment, but it was the first demonstration of the efficacy of a biological therapy for a chronic autoimmune disease. This led to recognition by the pharmaceutical industry that biological drugs are a viable class of therapeutic agents that can compete with traditional chemical drugs. This type of anti-TNF treatment is now known to be highly effective in about 70% of rheumatoid arthritis patients.

In an interview published this week in Biome magazine, Professor Maini (who is co-Editor-in-Chief of Arthritis Research & Therapy) discusses the events that led to this seminal work. Of his decision to work with Professor Feldmann after a mutual friend highlighted their common interests in autoimmunity and cytokines, Professor Maini explained:

“This was a meeting of minds that was absolutely critical to the discovery of anti-TNF; Marc and I forged a friendship that has lasted all these years and it was a very synergistic relationship in terms of scientific research and translation.”

Professor Maini also describes how the discovery transformed rheumatoid arthritis therapy that once focused on symptomatic treatment, so treatment of pain and inflammation, but didn’t control the underlying tissue destruction.

“When I first started working in rheumatology as a young doctor, the common site was that of patients in wheelchairs, crippled by their rheumatoid arthritis. Today if you went into a rheumatology clinic you will almost never see a wheelchair. That is an illustration of the revolution that has taken place in the management of rheumatoid arthritis.”

There remains a significant challenge to understand why a core proportion of patients become resistant to all forms of therapy. Disease pathogenesis, and the gene-environmental interactions that trigger the disease, need to be further investigated. However, it is clear that Professors Maini and Feldmann have made a vitally important contribution to treating this crippling disease.

This is contribution that was recognized last week by the Canada Gairdner Awards, which were created in 1959 to recognize and reward the achievements of medical researchers whose work contributes significantly to improving the quality of human life.

So what’s next for research into rheumatoid arthritis? The last word comes from Professor Maini in his Biome interview:

“We need to understand what initiates the disease because that is the big $64,000 question. […] We’re beginning to understand environmental factors that might be critical. We now know that smoking is an environmental trigger of rheumatoid arthritis. […] So already we have a handle on prevention, which is the best way forward in the control of any disease.”

Arthritis Research & Therapy is a translational journal dedicated to advancing the understanding of the cellular and molecular mechanisms of arthritis, musculoskeletal conditions and systemic autoimmune rheumatic diseases.