Avian influenza  A (H7N9) is a tricky version of bird flu which seems to be sweeping across China. At the end of April the WHO registered 126 cases and 24 deaths but as of the beginning of May according to the Chinese CDC, there have been 127 confirmed cases of H7N9 in mainland China with 26 deaths.

A lack of information about the virus and its mode of transmission has led to public concerns that H7N9 could be a pandemic waiting to happen. It is a difficult virus to track because its main hosts – birds – do not appear to show symptoms of infection.

But do humans need to be worried? The BBC hesitates with ‘yes and no’, while the New Scientist claims that ‘The risk of a flu pandemic is very real’ because H7N9 is resistant to antivirals including Tamiflu.

To assess this risk, scientists from the Hong Kong Baptist University and Chinese University of Hong Kong have generated a map of H7N9 risk in eastern China . The map, which has been published in Infectious Diseases of Poverty, is based on the northwards migratory patterns of birds (from the 4th February to the end of April) using environmental and meteorological data over the same 12 weeks – from Zhejiang, Shanghai, and Jiangsu, to Liaoning, Jilin, and Heilongjiang. 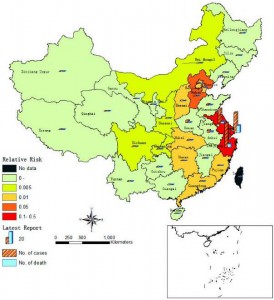 The distribution of potentially infected poultry was also included in the model. The majority of early cases of H7N9 were found in Shanghai, but Shanghai is not a big poultry exporter so the model shows limited transmission via this route. In contrast, Jiangsu distributes poultry to Shanghai, Zhejiang, and beyond.

Prof Jiming Liu who led the study explained, “By basing our model on wild bird migration and distribution of potentially infected poultry we are able to produce a time line of the estimated risk of human infection with H7N9.”

While the risk map itself does not directly indicate the exact number of human infections (nor the number of cases to be found), it can be used to understand and predict the relative risks in each area over time.  For instance, the authors predicted the emerging relative risk of infection in Shandong, due to the bird migration and poultry distribution, where two confirmed cases were later found.

Prof Xiao-Nong Zhou from the Chinese Center for Disease Control and Prevention who was also involved in this study commented, “We are continuing to work on research into the sources of infection of H7N9 and the mode of transmission. However so far there is no evidence of the sustained human-to-human transmission required for a pandemic to occur.”

By extending the model the authors hope to predict future infection risks across central and western China, which will aid in surveillance and control of H7N9 infections. Since the effect of poultry-to-poultry infection is not really understood it may become necessary to regulate the activity of poultry markets.