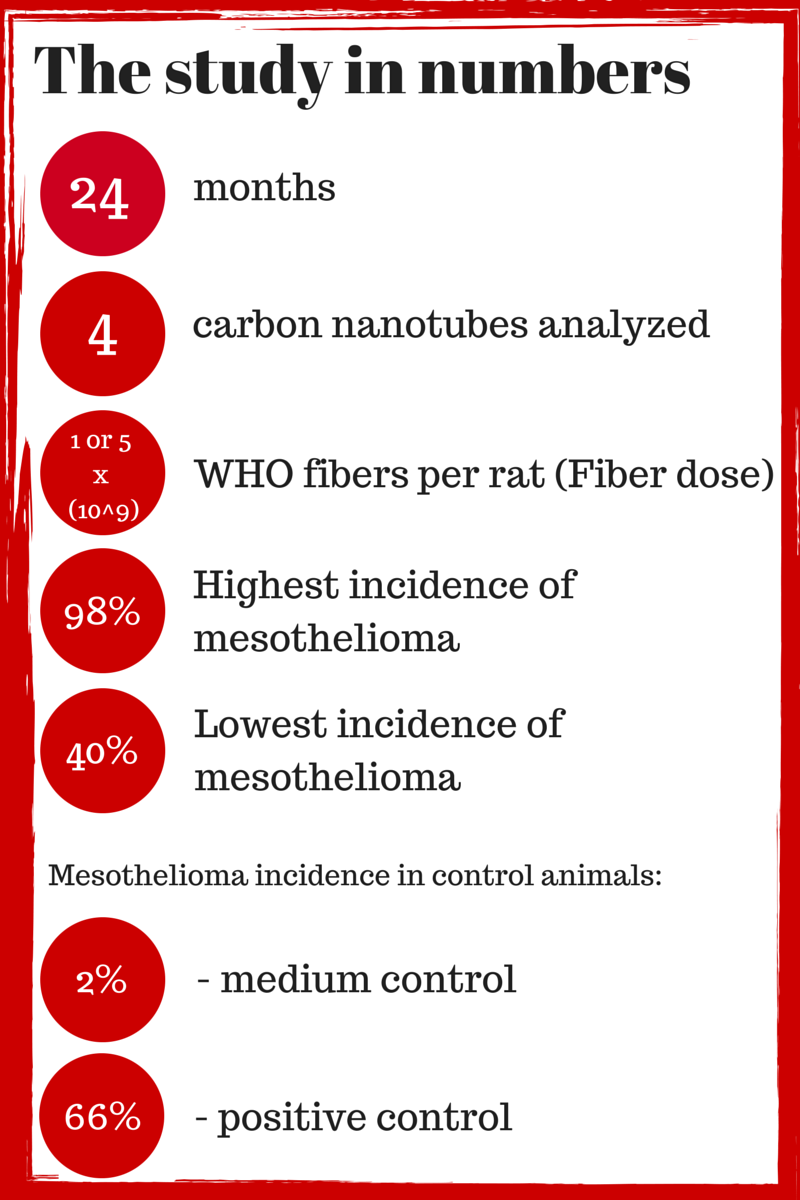 A study published last week in Particle and Fibre Toxicology has found that carbon nanotubes can induce cancer in rats, in a similar way to asbestos. In this guest post, Dr Craig Poland, Associate Editor on the journal, examines the study and explains why it doesn’t mean that carbon nanotubes are the next asbestos.

Last week, Susanne Rittinghausen and colleagues from the Fraunhofer and Leibniz Institutes in Germany published the outcome of a two-year rodent study into the carcinogenicity of carbon nanotubes.

The results were surprising although not wholly unexpected and show the most convincing evidence to date on the potential for some carbon nanotubes to cause a type of cancer most commonly associated with asbestos exposure.

But before we get into the nitty-gritty of the study, let’s first consider carbon nanotubes and where the question of carcinogenicity comes from.

What are carbon nanotubes?

Carbon nanotubes are a class of fibrous nanomaterial that can best be described as a graphene sheet (single-layer hexagonal arrangement of carbon atoms) rolled into a cylinder with a diameter in the nanometer range and a length many times that of its diameter (a high aspect ratio).

It is this structure that infers exceptional properties and makes these tiny tubes of carbon so interesting to material scientists and for commercial applications.

Why the concern over mesothelioma and the association with asbestos?

Carbon nanotubes, due to their fibrous morphology, have been linked to asbestos; a mineral fiber widely used for an enormous range of applications, but which caused an epidemic of disease in exposed individuals that continues to increase, and to which an estimated 125 million people are still exposed to in the workplace.

It was, and still is the worst occupational health disaster to befall the modern world, with approximately 107,000 deaths attributable to asbestos exposure annually, despite banning of asbestos in many countries. This has left an indelible mark on the conscience of society.

The link between carbon nanotubes and asbestos was first made in 1998 by Robert Service in an Editorial in the journal Science, which asked the question “Are carbon nanotubes the next asbestos?”.

This question is not unique to carbon nanotubes and given the enormity and severity of the asbestos disaster, this question righty or wrongly, has been asked of most, if not all, occupationally relevant fibrous materials.

Asbestos exposure can lead to a range of different diseases such as scarring of the lungs (asbestosis), lung cancer as well as disease of the pleural cavity, a sealed fluid filled space that sits between the surface of the lung and the chest wall. It is a cancer of the lining of the pleural cavity called mesothelioma, which is uniformly fatal and is seen as a hallmark disease of asbestos exposure.

There has been a significant focus on trying to understand if carbon nanotubes may present a hazard to the pleural space, and whilst many studies have raised concerns for certain forms of these nanotubes, robust evidence has still been lacking.

So what does this new study tell us?

Rather simply, the results of the new study in Particle and Fibre Toxicology show clearly the induction of mesothelioma in animals treated with 4 different multi-walled carbon nanotube (MWCNT) fiber samples and in many cases, rather quickly after injection.

The MWCNT samples were administered based on equal WHO fiber number, rather than equal mass which mean that the samples contained the same proportion of fibers with a length > 5μm, diameter < 3 μm and length to width ratio >3:1 as opposed to short or highly curled CNT.

The asbestos control fibers, as would be expected, also caused mesothelioma, but the use of a much lower dose (10-50 fold) than those used for the nanotubes makes direct comparison of the potency of the two fiber types not possible.

The new study uses intraperitoneal injection yet it is not a physiological route of exposure; is it relevant?

To think of peritoneal injection in the peritoneal bioassay as an exposure route would be to misrepresent the model and the findings of studies using this model. This is because it is not a model of exposure; it is simply a surrogate for the response to particles in the pleural space.

We know that particles and fibers can move from the lungs into the pleural space (as seen with asbestos fibers). From here they may be cleared naturally or could be retained and potentially cause a problem.

Within the pleural space, the mechanism of clearance (or failure thereof) is similar to that seen in the peritoneal cavity, making it an appropriate model for clearance/ retention of particulates in pleural space and subsequent reaction.

Evidence for the ability of carbon nanotubes to move into the pleural space after inhalation has been shown in several studies. However, what is missing is evidence that inhalation exposure of MWCNT can lead to mesothelioma.

Essentially, whilst there is evidence for MWCNTs passing through into the pleural space after inhalation and, in this separate study, that MWCNTs can cause mesothelioma in the peritoneal cavity (as a surrogate for the pleural space); the exposure route and the induction of mesothelioma have not yet been combined into a single experiment.

The result of this, as Rittinghausen and colleagues clearly point out, is that this study cannot be used for risk assessment, as it does not directly address the carcinogenic behavior of MWCNTs after inhalation exposure. It is however still crucial for understanding the potential hazards of certain forms of carbon nanotubes.

Another important component, and again stressed by the authors, is issue of dose. Whilst we know that multi-walled carbon nanotubes can pass from the lungs into the pleural space and those longer than approximately 5μm may be retained, we do not know what threshold dose is required to trigger mesothelioma, if this dose is attainable via inhalation exposure and if such inhalation exposure concentrations are relevant to humans under realistic scenarios. All of which are crucial questions.

So are carbon nanotubes the new asbestos?

To put it simply, no they are not, and in fact no material should ever be. This is because to draw the comparison to asbestos, we must consider the comparison in the true context of the asbestos disaster, and that was and to an extent, still is the widespread and uncontrolled exposure to a highly toxic substance. The key word here is exposure.

Asbestos is hazardous and no one would deny that, but there are many hazardous substances that are used in industrial processes, manufacturing or even in our daily lives safely because the hazards are known and the risks mitigated by safe use.

The difference with asbestos was that the hazards were not known or ignored; large-scale use meant large-scale production, resulting in emissions that weren’t properly controlled, which in turn caused exposure at unsafe levels and then widespread disease. This should never have happened and should never again happen.

If a material is found to pose a hazard to humans and/or the environment its use should be controlled to ensure safety. This is the fundamental principle of most safety regulation and also governs carbon nanotube usage (as with any chemical).

If, as this study suggests, certain forms of carbon nanotubes may pose a specific hazard, then exposure needs to be controlled to ensure safe use. It is the timely identification of hazards and controlling of exposure (or taking a precautionary approach) that is key to ensuring that no material becomes “the new asbestos” and that nanotechnology can reach its full, safe, potential.

A great read and a very informative article, thanks for sharing.

This is a very interesting post! Thank you very much for sharing! Thank god nothing will ever be as hazardous as asbestos because it is lethal! Hopefully these carbon nano tubes won’t harm as many people.

research which was amazing! Now I am getting to know about asbestos and others, I hope more and more people are aware of this. Thx for your information, i like this article , cherrrss!

>> If a material is found to pose a hazard to humans and/or
>> the environment its use should be controlled to ensure safety.

right, and carbon nanotubes have been shown in multiple studies ( not just the one in this article ) to cause mesothelioma in rats.

and what are we doing to ‘control the use of MWCNTs’ ? we are increasing their use everywhere. aeroplanes, cars, bicycles and as of 2015, dell are now making their laptop computer cases out of the stuff. it seems to me that this is without a shadow of a doubt the next asbestos.

Ideally, regulatory bodies and quality scientific studies would have the final word on whether new materials are safe enough for widespread public use, and that, if there were risks associated with a substance, they were properly controlled to minimize that risk to the public, the environment, and workers directly exposed to the material. Ideally, the government and science would protect us from repeating the mistakes of the past.

However, there are numerous examples of such protections failing or being undermined by industry, economic, or political interests (lead in gasoline and drinking water, tobacco, Thalidomide, BPA, DDT, etc.). Despite what many people believe, new substances–even those the public is widely exposed to–and substances known to pose significant health or environmental risks are used regularly in manufacturing processes and products before much research is done into long-term effects. Even when research is done, it is typically funded or even performed by entities with a vested interest in ensuring the substance is viewed as safe. Obviously the results from such studies are questionable, at best.

The assertion that carbon nanotubes couldn’t possibly become the “next asbestos” is naive at best, and ignores the realities of public perception, business, economics, politics, government, policy, regulation, and enforcement.

Unfortunately, substances with unknown health or environmental impacts are usually widely permitted in industry use until years after there is definitive scientific proof of the harm they cause.

very interesting, if so, usefulness of carbon nanotubes should be curtailed, although they have not proven having the nature of danger as asbestos