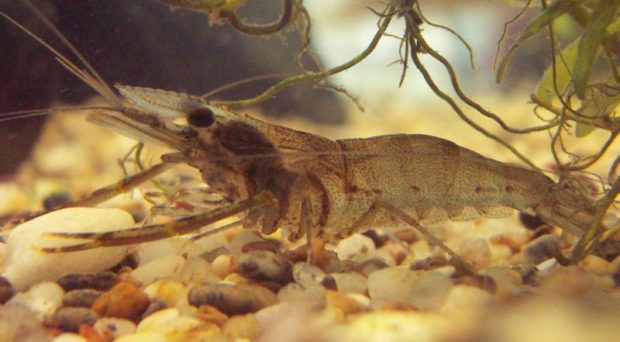 This species of river prawn, Macrobrachium formosense, is found in Japan, but is in the same genus as prawns overlapping and predating on schistosoma hosts. Photo credit Wikicommons.

Schistosomiasis is a major public health concern in many countries globally. A recent blog in BugBitten has a great overview of the lifecycle and highlights the importance of intermediate snail hosts. While you are encouraged to read the previous blog, we’ll provide the cliff notes that will be essential context for this weeks’ research highlight.

Schistosoma parasites undergo complex lifecycles – with asexual reproduction in snails and sexual reproduction in humans (or other animals). Schistosomes infect a few types of freshwater snails that can live in lakes, rivers, and reservoirs. People become infected when they contact contaminated water – free swimming larval stages are released by infected snails and they can burrow directly into human skin. Schistosomiasis is sometimes called snail fever, highlighting the importance of these animals in the transmission of these parasites.

At the turn of the 20th century, a dam was built on the Nile in Egypt. The dam allowed expansion of irrigation upstream of the dam.

Although this was a welcome improvement, within a short period of time the prevalence of schistosomiasis in communities around these newly irrigated locations increased. The correlation between dams, irrigation and an increase in snail fever was identified in several areas and the World Health Organisation cautioned about irrigations’ unintended consequence.

Although this association between dams and schistosomiasis has been recognized for over seventy years, few studies have attempted to understand the mechanisms linking building of dams and increases in schistosomiasis.

In a Special Issue on ‘Conservation, biodiversity and infectious disease’, Sokolow and co-authors tested a hypothesis that dams lead to an increase in schistosomiasis because they reduce populations of snail predators. Freshwater prawns belonging to the genus Macrobrachium predate on snails that are intermediate hosts of schistosomiasis. They overlap in large parts of their ranges, but some of these prawn species are migratory and require access to the sea to complete their lifecycle. When dams are built, they block these migrations and are believed to be responsible for population declines of these predators.

To test their hypothesis, the researchers gathered spatial data on prawn ranges, locations of dams, and areas of watersheds impacted by dam construction. They also collated data on schistosomiasis prevalence in areas upstream and downstream from dams before and after construction. This data came from a publically available database of neglected tropical diseases.

As the authors emphasize, they are unable to estimate the effect of prawns directly. There is no data on prawn sizes available on the spatial or temporal scale they were examining. However, by showing a larger increase in prevalence in Macrobrachium watersheds compared with prawn-free catchments, it strongly suggests that predators do play a role in reducing schistosomiasis burden. This large scale analysis supports laboratory and field studies that show that prawns can reduce numbers of intermediate snail hosts and onward human transmission. Together, these studies provide strong empirical support for alternative control options.

Reintroducing native predators to catchments could provide a win-win scenario: reducing transmission of schistosomiasis and restoring food webs in these altered watersheds. Vector control is used to control schistosomiasis in several regions, but involves molluscicide which can be detrimental to many organisms. Reintroduction of prawns can provide similar benefits in controlling vectors and have fewer negative consequences.