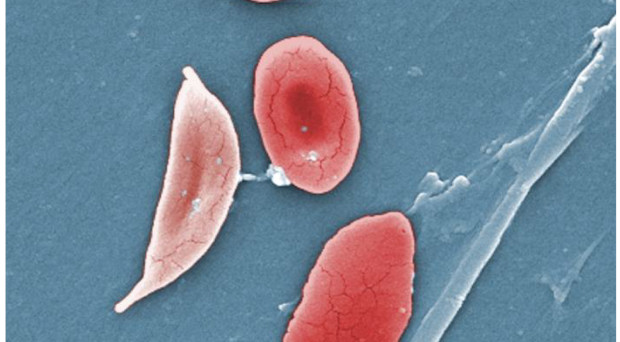 Sickle cell disease (SCD) is a major cause of death in young children in Africa. The condition is caused by a mutation in the gene encoding the β-globin subunit of the hemoglobin molecule in red blood cells. It is a recessive hereditary disease, meaning that sufferers have inherited the mutated form of the gene from both parents. The mutation causes red blood cells to take on an abnormal sickle like shape, and sufferers of the disease may experience severe infections, attacks of acute pain and stroke. They also have an increased risk of death. Despite the existence of vaccines and therapeutics to manage the condition, 176,000 people died of the disease in 2013.

Carriers have inherited the mutated form of the gene from only one parent and are said to carry the sickle cell trait (SCT), but do not suffer from the disease. SCT confers resistance to malaria and it is generally accepted that this accounts for the high levels of SCT in some parts of the world where malaria is endemic – in fact SCT prevalence is in excess of 15% in much of Central Africa. However, the degree of association between malaria and SCT prevalence is not well characterized.

Therefore, Eric Elguero and colleagues conducted an epidemiological study to investigate the relationship between present day malaria and SCT prevalence in Gabon. They took blood samples from 3,959 people of whom 21.7 % had the SCT genotype and 52% showed evidence of Plasmodium infection. Elguero and colleagues go on to show that an increase in malaria prevalence of 10% is associated with an increase of 4.3% in SCT carriers. There is, they conclude in their study, a strong association between malaria and SCT prevalence. This means that malaria continues to be a selecting factor for SCT.

Furthermore, age (though not gender) is also associated with SCT prevalence – an increase of 10 years increasing SCT prevalence by 5.5 %. Two possible hypotheses are offered by Elguero’s team to explain this association: firstly, the selective pressure of malaria has decreased with time due to improved health care, or alternatively the genotype that gives rise to the SCT confers protection against severe malaria in adult life as well as in childhood.

Finally, Elguero and colleagues claim the impact of their findings goes beyond that of public health and illustrates that humans are still evolving in response to their environment. This is contrary to many scientific and non-scientific reports that state humans have stopped evolving and now rely only on culture and technology for survival.

There are plenty of references showing malaria and other diseases have shaped the human genome in the past – Sarah Tishkoff and Scott Williams review this relationship specifically in Africa – and there is a growing body of evidence showing ‘recent’ human evolution can be due to environmental impact, but Elguero’s study argues that it is still happening in the case of malaria and SCT. His study alone may not convince the skeptics, especially if Elguero’s theory that better medical care could reduce the selective pressure of malaria on SCT is correct, so further investigations will be required to change people’s minds. And to expand on this, it will be interesting to see if other infectious diseases or agents are currently pushing (or may in the future push) human evolution, especially with the rise in antimicrobial resistance making it more difficult to control infectious diseases.