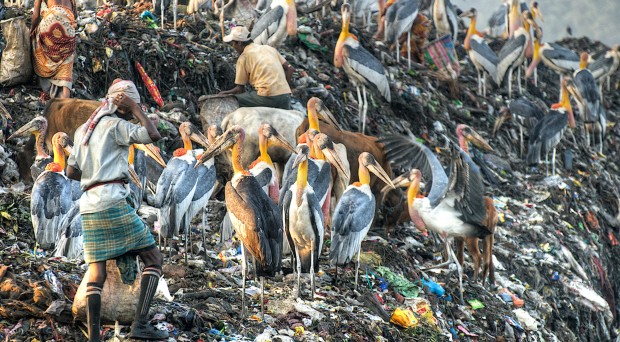 Dhritiman is a Conservation Biology Researcher working in North East India. His primary research interests are in ecosystem ecology and interdisciplinary approaches in biodiversity conservation.

The Brahmaputra Valley is considered the last stronghold of this endangered stork and harbours more than 80% of the global population of the species. So how did Dhritiman come to taking this photo?

This is an amazing image.  Tell us a little bit about where and when this picture was taken.  Are there always this many storks?

I took a visit for a bird watching trip to Deepor Beel Ramsar, a wetland in Guwahati, Assam, India. While here, I came across the Guwahati Municipal Corporation’s garbage dump near the wetland and I took this photograph.

It was 22 October 2014. This urban garbage dump now has the largest concentration of Greater Adjutant Storks in the world, because of the ongoing destruction to the surrounding wetlands and its natural habitat. They can therefore be found here all the year round.

The storks are in such close proximity to the people.  Have they lost any fear of humans?

Yes, it seems to be. These birds gather in urban disposal sites for foraging along with urban garbage collectors.

Why did you enter this image in the competition, and how do you feel now that you’ve won?

I think the image shows the paradoxical relationship between ongoing development and the environment. I feel very happy and privileged to be part of the competition and winning it.