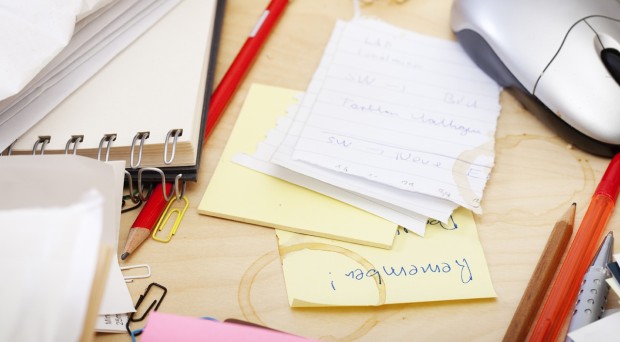 "Sometimes the paperwork can seem endless."

I have a very clear memory of the first time my supervisor plonked a thick wedge of paper on my desk, with a dog-eared post-it declaring that the deadline for reviewers comments was the end of that week.

“Can you take a look at this for me? I’ve been up to my eyeballs in grants and just haven’t had a second to myself…”

Ears burning with pride, I muttered something agreeable and smugly pottered off to the library, thrilled at the honor bestowed upon me.

Oh how naïve I was.

Now three years into a postdoc, I’ve come to dread those piles of paper that not so infrequently end up on my desk. I’ll inevitably already have three experiments running simultaneously, a seminar to go to in a different department, a couple of meetings with students and collaborators, and then apparently I’m supposed to keep up with the latest literature at some other point in my apparently 56-hour day…

But actually over time I’ve also learnt that there is always something to be gained from the admin, however pointless and unnecessary it seems to be.

When someone first suggested to me that I write a grant to apply for some bridging funding, I looked at them blankly, filled with a numb sort of terror.

When someone first suggested to me that I write a grant to apply for some bridging funding, I looked at them blankly, filled with a numb sort of terror. I didn’t have a clue where to start – I was convinced I didn’t have enough ideas; that the project wasn’t interesting enough; that I’d missed something obvious and would be laughed out of the board room.

But then, after reading a few of the grants that my boss asked me to review, I realized pretty quickly that my ideas weren’t so stupid after all. Obviously I read some incredible applications that were mind-blowingly insightful, beautifully written and elegantly designed…but I also read some absolute shockers. And, rightly or wrongly, that started to give me hope.

Scientists are trained to be immensely self-critical, which is essential to analyzing new data and coming to appropriate conclusions. But I think it can perhaps sometimes be counter-productive – we’re never satisfied with our own efforts. So it can be incredibly helpful to be able to see what your peers regard as a satisfactory effort, be it for a paper, a grant application, or even an abstract for a conference.

I actually think that scientists probably get away with less admin than many other fields, by definition really – we get to play with funky bits of machinery and nasty chemicals and so on too. But even then, the paperwork can sometimes seem endless and a completely pointless waste of time.

But despite the pressure it puts on my time, I’ve come round to the idea that it’s actually a really useful exercise. It obviously gives me an idea of where my peers are at (always good to know) but it’s also an incredibly useful training exercise for how to approach writing a paper or a grant, or setting up a collaboration, or negotiating a trial period for a fancy new piece of equipment. Or – more importantly – how not to do it.

So I think perhaps instead of moaning about the seemingly perpetual pile of paperwork with our names on, we should maybe look at it as an opportunity in the making. It’s a competitive world, whether we like it or not, and ugly as the admin pile is, it might not necessarily be all bad.

This post is the fourth of Bryony’s series: ‘Trials, tribulations, triumphs, and test tubes: life as an early career researcher’.

Well written and interesting. I think one of the main takeaways here is that there is a lot of value in peer-review. I also have had the chance to peer review grants. I learned a lot through that process.
Take care
@allanmcdougall

Bryony studied Human Genetics at the University of Nottingham before undertaking a PhD in epigenetic gene regulation at Imperial College London. After graduating in 2012, she moved to Oxford where she currently works on red blood cells, investigating the function of non-protein coding regions of the genome.