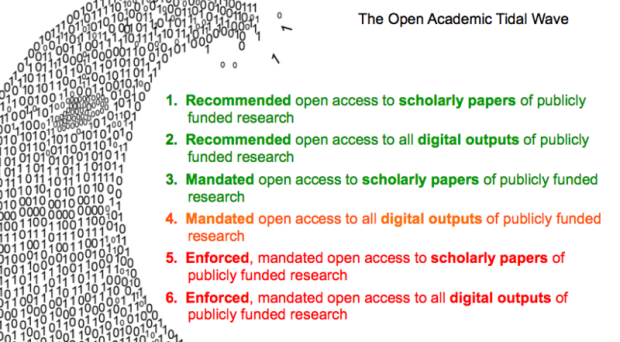 The growing sense that open data is going to become the expected norm can be seen as part of what Mark Hahnel calls the “Open Academic Tidal Wave”.

Digital Science are launching a new series of ‘Spotlight’ events, focussing on the challenges researchers face and how they can be addressed.

The first event in the series addresses the topic of open data, looking at the obstacles & opportunities for the research community. The discussions will aim to address possible concerns and worries that researchers might have, as well as the many benefits, both for researchers and for society.

The event is taking place this Thursday at Macmillan Science & Education’s London HQ, from 7pm – 9pm and BioMed Central’s very own open data expert, Amye Kenall, will be speaking at the event.

Informative examples of open data and its impact will be presented and practical advice from experts in open scholarly communication will be shared.

The momentum behind open data has been growing and growing over recent years, with increased awareness in the research community and more and more funder mandates coming into effect.

Mark Hahnel, founder of figshare, has covered the open data movement on the figshare blog, with two detailed blog posts, here and here.

“As governments and funders of research see the benefit of open content, the creation of recommendations, mandates and enforcement of mandates are coming thick and fast.”

The growing sense that open data is going to become the expected norm can be seen as part of what Mark calls the “Open Academic Tidal Wave”.

As Mark says, “the open research tipping point seems to have been passed. When speaking with funders, there is general acceptance that all research should and will be made available in the coming years.

“It is quickly becoming clear that the benefits of open research to both those who fund it and to wider society mean that the wheels that have been set in motion have put academia on a course which cannot be altered, or returned to a previous state.”

Jon Tennant, Imperial PhD student and prominent open science activist, recently wrote an informative post on the Digital Science blog addressing some of the perceived problems with open data. As well as being an interesting read in it’s own right, it also serves as an excellent primer for our Open Data Spotlight.

As Jon states, “There is a new frontier in open science and that is data. Funders are increasingly mandating that researchers make their primary data available so that it can be built upon, though it’s not all plain sailing. Many researchers remain unconvinced that it’s in their own personal interest to share their data.”

The Open Data Spotlight will hopefully help to convince researchers that open data is not something to be worried about it, but rather it is to their own benefit as researchers.

If you wish to attend Digital Science’s Open Data Spotlight you can register here. The hashtag for the event on Twitter is #OpenDataSpotlight.