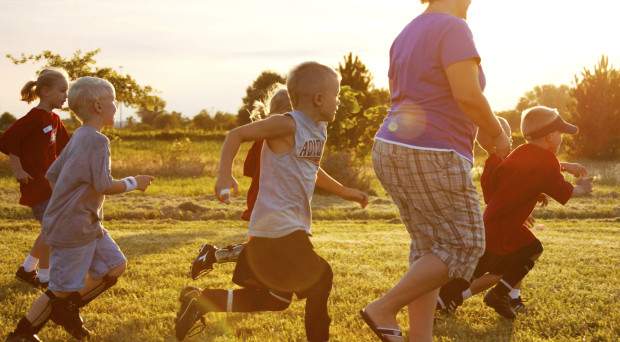 What can parents do to help prevent obesity in their children?
Flickr

Last month, UK parents were told something shocking. According to the chief executive of NHS England, they are doing something ‘terribly wrong’ in the fight against childhood obesity.  Expressing concerns about the future health of children that are overweight or obese, he states that the problem has to be addressed in order to prevent it from placing an ever greater burden on the NHS.

Childhood obesity is certainly an active area of research. A simple search of BioMed Central’s ISRCTN registry brings up 46 registered studies that have, or are, taking place in 17 different countries.

Furthermore, BioMed Central recently launched its own journal, BMC Obesity, which has published a range of papers on childhood obesity, covering prevention, management, the role of social status and the influence of food advertising.

So, what can parents concerned about their child becoming obese do to help them lose weight or indeed prevent them becoming overweight in the first place? Here, We are going to look at some of the relevant research in order to try and find some answers.

Childhood obesity begins in the womb

It is thought that the seeds of childhood obesity can be sown when the child is developing in its mother’s womb. According to recent research, the environment within the womb can predispose a child’s body cells to store extra fat, leading to alterations in the child’s metabolism that can result in insulin resistance.

It is thought that the seeds of childhood obesity can be sown when the child is developing in its mother’s womb.

As with the population in general, pregnant woman can manage their weight and prevent putting on too much weight through a healthy diet and regular exercise.  Research in the area includes the Blossom Project Online, a U.S-based website that encourages pregnant women to do some physical exercise in order to help prevent them from gaining too much weight.

In a study looking at the effectiveness of this resource, everyone taking part was given access to part of a website giving information and recommendations regarding diet and exercise.

However, only half of the participants were able to see another, more interactive, section of the website, encouraging the expectant mothers to gradually increase their level of physical activity to 150 minutes of moderate walking every week for the duration of their pregnancy.

The results from an earlier pilot study produced some interesting results. They showed that children born to overweight women that did at least 150 minutes of moderate exercise every week during pregnancy were smaller and of a lower birth weight than those that didn’t.

Similarly, this research showed that an antenatal program of dietary and lifestyle advice designed to limit the amount of weight gained in expectant mothers with a BMI of at least 25kg/m2 reduced the risk of giving birth to an overly large (macrosomic) baby.

However, over-nutrition during pregnancy is not the only risk factor for childhood obesity. Obesity can be due, in part, to how our bodies adapt to marked changes in the diet during pregnancy. The diet of many South Asian people, for example, are inadequate both nutritionally and in terms of energy when living in their own countries and find that once they have moved to a European country they eat far more food than is required, leading to nutritional imbalances over time.

If this occurs during the early stages of pregnancy it may affect the foetus’ development and predispose them to diabetes and childhood obesity. The ISRCTN registry record for the GIFTS: Mother and Child Study describes a recent investigation into whether the health of mothers and, ultimately their babies, can be improved with a comprehensive program during pregnancy, including vitamin and mineral supplementation, diet, lifestyle and weight management advice.

The role of diet and exercise

Although other factors do come into play, it is undeniable that, in many cases, childhood (and indeed adulthood) obesity is due to a combination of two main causes; eating too much food (particularly high fat and high sugar foods) and not doing enough exercise.

In many cases, childhood (and indeed adulthood) obesity is due to a combination of two main causes; eating too much food (particularly high fat and high sugar foods) and not doing enough exercise.

For the most part, adults bear the responsibility for their own weight problems due to the lifestyle choices that they decide for themselves. However, according to the WHO Director-General, the cause of childhood obesity is much more complex and is partially driven by family and environmental influences.

In 2008, Burke and others developed the Children’s Health and Activity Modification Program (C.H.A.M.P), a community-based lifestyle program designed for children with obesity and their families.

This took place over four weeks and offered a number of group-based activities for children, including sports and physical game-based activities, as well as counselling sessions on diet and unhealthy behaviours.

The children’s parents or caregivers attended educational sessions on, for example, how to change their children’s behaviour, physical activity and nutrition. ‘Booster’ sessions were offered to both children and caregivers once every two months for one year following the program.

Burke notes that “there are a number of social, economic, and environmental factors that contribute to childhood obesity; unfortunately, we live in a society where the healthy choice is often the difficult choice.”

There are a number of social, economic, and environmental factors that contribute to childhood obesity; unfortunately, we live in a society where the healthy choice is often the difficult choice.

She also pointed out that “parents are role models for their children, and the home environment influences children’s health behaviours. Thus, parents are in a unique position to promote and support behaviour change in their families. Working with and helping to empower caregivers and families is an important next step in our research targeting childhood obesity.”

So, what is the take home message for grown-ups?

It’s something of a cliché, but true all the same; prevention is better than cure.  Women who are pregnant or planning to start a family have an early advantage.  A healthy diet and exercise program will not only benefit their unborn child. It will also reduce their own risk of developing a number of complications, including miscarriage, gestational diabetes, high blood pressure and pre-eclampsia.

The most important environment for a child, particularly when very young, is the family home. Children tend to eat what their parents eat so a family-wide adoption of a healthy diet and lots of exercise seems an obvious step forward, particularly as weight problems tend to run in families, with overweight children often having overweight parents and other relatives.

One thing is clear, with the number of overweight or obese children worldwide  estimated to be 70 million by 2025, the most important take home message is that successful strategies have to be developed now, for both our children’s and our grandchildren’s future health.

Thanks for all your hard work researching the topic . However obesity and passing it on to your babies and children has an emotional component and is much like addictions in a family. Not only are they not eating and exercising the correct way they’re also not helping the kids with their babies with their feelings and using food to medicate them . It would be helpful to look at that aspect of the families as they have many things in common.
http://listentomeplease.com/listen-to-me-please-blog/22-ways-to-create-an-overweight-babytoddler

Yes, at present childhood obesity is an active area of research, as it’s likely to be a epidemic in many countries. The fact that children began to be influenced in obesity risk when they are in mom’s womb can’t be ignored, as many studies has been proved that with numerous researches. Thus mothers should pay attention to their own condition as well as the babies in their womb during the pregnancy.

I have to thank you for this good site .I for sure loved every little bit of it. I have you bookmarked your web site to look at the latest stuff you put up.

Editor at Biomed Central
Alison is a Team Manager for the BMC-series. She studied at the University of Reading completing a PhD on investigating the effects of mutations on the structure of p53. After working for a time in academia, she joined BioMed Central in May 2014, as a Database Editor for the ISRCTN registry. Alison joined the BMC-series in November 2016 and is the editor for a number of biology journals, including BMC Bioinformatics and BMC Ecology and Evolution.