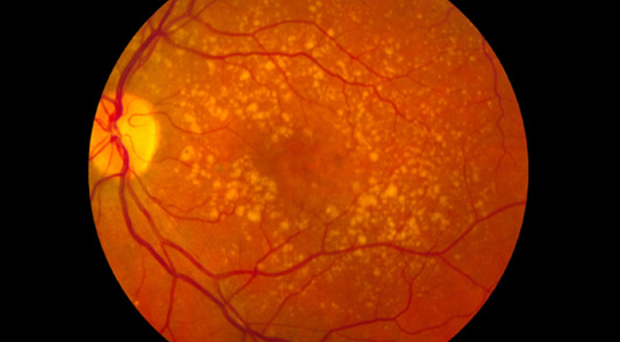 What is age-related macular degeneration (AMD), and what is known about the causes and risk factors?

AMD is the leading cause of irreversible blindness in the elderly, and causes loss of central vision. It is rated among the 15 causes of disability, with the largest burden increase in the last 20 years.

The pathology of AMD is complex. Focal deposits known as drusen form under the retinal pigment epithelium (RPE) and central pigment alterations indicating RPE dysfunction appear relatively early in the disease process. The formation of drusen appears to be triggered by a local inflammatory response associated with complement (over)activation.

The trigger for pigment alterations is still unclear, but drusen appear to have a strong relation to RPE dysfunction. This can result in increased levels of vascular endothelial growth factor, which in turn leads to growth of blood vessels from the choroid into the sub-retinal or sub-RPE space (neovascular or wet AMD).

A plethora of risk factors has been identified; age, genetic risk variants, and lifestyle factors such as smoking and nutrition are the most important determinants. However, how these factors interact to cause AMD is still unknown.

How did you become interested in investigating the link between thyroid function and AMD?

Thyroid hormones have a regulatory role in nearly all organs, and have various visual functions. In animal models, it has been shown that inducing hypothyroidism in mouse models of retinal degeneration preserves cone photoreceptors, while an excess of thyroid hormone accelerated the deteriorations of cones.

What were the key findings from your research?

We demonstrated that higher levels of free thyroxine (FT4) are associated with an increased risk of AMD. This effect remained when we analyzed subjects who had normal thyroid function and when we excluded those that use thyroid medication.

This implies an intrinsic effect of thyroid hormone in the pathogenesis of AMD. We also discovered an association between higher thyroid hormone levels and retinal pigment alterations. These alterations in pigment are markers of RPE dysfunction and are often observed in early AMD disease, which suggests a role for thyroid hormone during development of AMD.

You found an association between FT4 and AMD, but no link between thyroid stimulating hormone (TSH) and AMD. Why do you think this is?

Other studies conducted in elderly people and focusing on different clinical endpoints, such as atrial fibrillation, also found an effect of FT4 but failed to show a similar effect with TSH. One explanation for this seemingly discrepant finding could be a changed set-point in the elderly. It has been described that in aging populations, TSH levels increase while FT4 values stay relatively stable over time.

Are those with hyperthyroidism more at risk of AMD?

In our study we find that higher FT4 levels are associated with an increased risk of AMD across the full spectrum of thyroid function. This suggests that those with hyperthyroidism have the highest risk of AMD compared with other thyroid states.

However, most people with overt hyperthyroidism will be treated for their disease during the course of life and their thyroid function will therefore normalize. We do not have information yet on whether decreasing thyroid hormone levels in hyperthyroidism patients will reverse this risk.

What are the clinical implications of your findings?

During recent years, a larger proportion of the population is receiving thyroid hormone treatment. Many of those receiving treatment have subclinical hypothyroidism, defined by a high TSH and an FT4 within the normal range.

Furthermore, treatment of thyroid cancer patients involves TSH suppression therapy, usually in combination with high FT4 levels, which is associated with an increased risk of AMD.

Our findings support the practice of more recent years to restrict the time period of TSH suppression in thyroid cancer patients.

Our findings support the practice of more recent years to restrict the time period of TSH suppression in thyroid cancer patients.

Did you encounter any challenges in conducting your research, and has this led to any limitations?

We did not encounter any challenges due to the novelty of this finding. Nevertheless, a relevant limitation of this study is that thyroid function was measured only at baseline, which did not allow assessment of the effect of changes in thyroid function over time. This could have provided more insight to why we only find effects with FT4 and not with TSH.

What future work should be done following the results of your study?

There are many opportunities for future work in this field. For example, scientists involved in thyroid cancer research could investigate the effect of long-term TSH suppression therapy on development of AMD. Also, functional studies could provide an answer to whether these effects are through direct action on the RPE, or through other pathways. It will be important to elucidate to what extent this could be reversed or modulated.

Thank you for this post. My wife has subclinical hypothyroidism and has been on medication for few years. She is only 30 years old and has now been diagnosed with macular degeneration. I suspected a link.