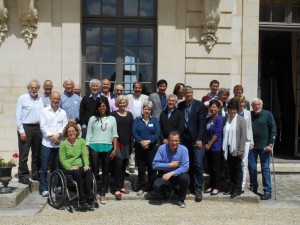 With the advent of the AllTrials initiative, the EU Clinical Trials Regulation and the recent Tamiflu debacle, randomized controlled trials (RCTs) have received a lot of attention over the last 12 months. Despite all this recent furore surrounding the reporting of RCTs, there are those of us who have been banging this drum for a while.

These are nothing new, and it was in 1994 that a group of determined researchers, collaborating with medical journal editors, published SORT, which was to become the first Consolidated Standards of Reporting Trials (CONSORT) statement in 1996. Twenty years later, the CONSORT Group held its most recent meeting in the Château d’Ermenonville, Paris, which I was delighted to have the opportunity to participate in.

What impact has the CONSORT Statement had?

Since its initial publication, the CONSORT Statement has seen two updates in 2001 and 2010, almost 10,000 citations, countless extensions and implementation documents, and even its very own Twitter feed. Indeed, research has shown that reporting improves in journals that use CONSORT, but many problems with reporting still exist. The CONSORT Statement itself seems to be well accepted, but its actual implementation needs improvement.

One measure of impact is the number of journals that ‘endorse’ the guidelines. This is typically given in a statement in their Information for Authors, with over 600 journals currently endorsing CONSORT. In 2005, Altman found that 22% of high-impact journals endorsed the CONSORT Statement, and Hopewell showed that this increased to 38% in 2008. Larissa Shamseer is in the process of updating this based on the 2011 Journal Citation Reports  and has found that, of the top 10 general and top 5 specialty journals, 59% endorse the guidelines (not published).

However, implementation of the guidelines has proved haphazard and passive. A recent systematic review by Turner et al. suggested that, while those journals that included a statement endorsing the CONSORT Statement were associated with improved reporting of some items, a number of key elements defining a clinical trial showed no improvement and are still poorly reported. 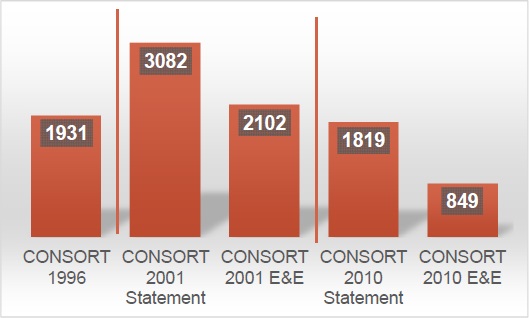 So why are these problems persisting? Philippe Ravaud pointed toward a lack of awareness and lack of familiarity as leading barriers to implementation.
This was supported by Shamseer, who highlighted that, while the 2010 update is increasingly cited, citations are still increasing for the 1996 and 2001 CONSORT Statements. Furthermore, while many researchers are aware
of the main CONSORT Statement, there has been an explosion in the number
of CONSORT extensions, as well as other relevant reporting guidelines that researchers need
to adhere to.

Philippe Ravaud proposed a potential solution to help researchers identify the relevant guidelines. In the WebCONSORT trial, his team is evaluating a simple web-based tool to integrate the various CONSORT extensions into a bespoke checklist for the author. They will evaluate the impact of the tool based on the number of CONSORT items reported in manuscripts revised using the tool, compared with those without.

Similarly, David Moher presented on the CONSORT Checklist Management System (CMS). This web-based software-as-a-service tool offers an interactive, item-by-item guide through the CONSORT 2010 checklist, allowing users to highlight and link text associated with each checklist item, and tracking the completion of each item, providing a checklist fulfilment report. The aim of the CMS is to allow interaction between authors, journals and peer reviewers during the editorial review process, and remove CONSORT as a pain point.

This was an aim shared by Ida Sim, who is involved in the development of the ExaCT Extraction System, which assists users with locating and extracting key trial characteristics (e.g. eligibility criteria, sample size, drug dosage, primary outcomes) from full articles.

The advent of these exciting new initiatives should help to clarify and simplify the CONSORT landscape; however, these are only aids and, as Grimshaw stated, it all comes back to a simple questions: Who needs to do what differently?

What can we do?

Nikolaos Pandis gave an interesting case study for this, in the guise of the American Journal of Orthodontics and Dentofacial Orthopedics (AJODO). The journal began an active endorsement of the CONSORT Statement in 2004, whereby the checklist was required on submission; however, this did not show the improvements in reporting that they had hoped for. In 2011, CONSORT was integrated into the review process, in order to give CONSORT-specific  feedback to authors regarding their submissions. This has seen a marked improvement in the reporting standards of the articles published; however, it has also proved time-consuming, with many revisions sometimes required.

Jason Roberts presented an alternative model for small and medium-sized journals, whereby the checklist was both provided and captured on submission. Software would then automatically scan the articles for compliance and highlight (potential) omissions. This was demonstrated with the StatReviewer beta. 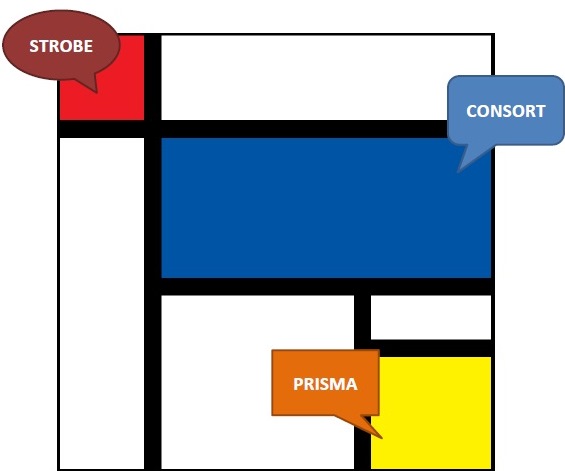 These initiatives show the huge amount of work that is going on to improve reporting standards in clinical trials, and to make adherence as simple as possible for authors. There is a need to coalesce all these efforts in to a focused campaign to encourage adoption and proper use:

While the current CONSORT landscape may have moved from Miró to Pollock, a concerted, simplified approach is needed, not only for RCTs, but all study types. Whatever happened to Mondrian?

You can read more about the EQUATOR scientific meeting and annual lecture on our blog.

One practical way to help authors adhere to CONSORT is to ensure an appropriately Certified Medical Publication Professional (who has to pass a test on 150 topics related to ethical and effective publication practices) helps them. Emerging evidence indicates that adherence to CONSORT is higher for manuscripts prepared with professional support vs those without. There are almost 1000 CMPP-qualified people around the world – find them here: https://www.ismpp.org/cmpp-directory. They are not in beta mode. They are ready to help right now. They will probably be the ones most likely to read Instructions to Authors and to encourage authors to use new CONSORT-supporting software.

Disclosure: I have sat (and passed) the CMPP exam and serve on the Board of the not-for-profit International Society for Medical Publication Professionals

[…] Although the focus of this years’ meeting was not on RCTs, perhaps the best known of the reporting guidelines is for RCTs. The Consolidated Standards of Reporting Trials (CONSORT) statement, formed of a 25-item checklist and a flow diagram, is an evidence-based minimum set of recommendations for their reporting. Good reporting of clinical trials is vital – they will form the basis of clinical decisions – but more work is needed as research has shown time and time again that that the current quality of reporting is not sufficient. You can read more about the CONSORT group’s most recent meeting on our blog. […]