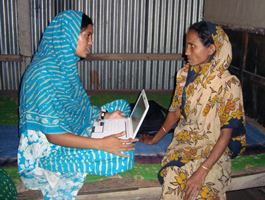 This post is the first of  a series about verbal autopsy, the subject of a selection of articles just published in BMC Medicine’s Medicine for Global Health collection.

Determining causes of death is vitally important to public health. It helps to determine what health problems are afflicting a population, which in turn affects policies and strategies to improve health and reduce the number of deaths from certain causes.

One of the first examples we have of a research method to determine causes of death in a population is from 17th Century London, where ‘death searchers’ recorded deaths in the population by weekly household visits, mainly to estimate mortality from the plague.

These days, in developed countries, the process has become routine, with compulsory death registration and medical diagnosis of each death. But in developing countries, where many deaths take place outside of healthcare settings, things get more complicated.

Verbal autopsy, which is the focus of a new series of articles in BMC Medicine, is a research method to determine causes of death in cases where there was no medical record or formal medical attention given. At a basic level, it involves asking questions of family members or people who knew the deceased well, to record the events, signs and symptoms that led to the person’s death. This information is then analyzed to determine the possible causes.

While this idea seems simple, it doesn’t take long to see a whole range of challenges surrounding the efficacy and accuracy of the process. The main ones are firstly, the quality and details of the questionnaire used to gather the information about the death, and secondly the way in which this information is analyzed.

In his commentary to introduce the series of articles, Michel Garenne describes the development of verbal autopsy from the 1970s onwards and highlights some of the questionnaires now used, as well as the different ways in which we can analyze the results.

One of the most contentious issues appears to be the comparison between automated analysis of the questionnaires, versus analysis by a medical professional.

The quality of automated methods can be judged by their statistical performances, and usually against a gold standard, such as hospital-based medical diagnosis. Articles by Chris Murray et al. and by Prabhat Jha and colleagues in the new series, explore the performance of these automated methods, comparing the final diagnosis made by verbal autopsy with the hospital diagnosis taken as the reference.

It’s clear there is still considerable room for improvement with either method, and that the benefits and disadvantages of each will likely continue to be the subject of much debate – particularly as the results from the different pieces of research don’t agree.

Even the ‘PHMRC gold-standard’, which was made available for public use last year, is proving controversial, with Peter Byass pointing out some of the potential issues with the new ‘gold-standard’ approach.

Having said that, there’s no doubt that verbal autopsies are important for public health. Garenne’s commentary points out that the use of verbal autopsies in Morocco in 1988 “quickly revealed that neonatal tetanus was a leading cause of death in the country. When this was presented, the Ministry of Health embarked into a major campaign to eliminate neonatal tetanus, a goal achieved within a few years and certified in 2002.”

An opinion piece from Prabhat Jha points out the importance of the continuing work on verbal autopsy. One would hope that the new findings presented in BMC Medicine are another step towards improving verbal autopsy standards, ensuring that further successes like that of Morrocan neonatal tetanus can be achieved in the future.

Chris Murray’s article states publication of the 2001-3 MDS records occurred only in 2010 and attributes the delay to physician coding. This is factually incorrect. The main field work was done in 2004-5, and the main delay was due to scanning the paper records and due to administrative delays. The double coding of over 130,000 records itself was done within 18 months and the main report published by RGI in 2009. With the new physician coding system in place, we were able to double code over 40,000 deaths for 2004/5 by about 200 physicians within 2 months. There are now over 300 physicians on board, so future coding should be much faster.

[…] improving the coverage and quality of COD data is vital. Verbal autopsy (VA) is currently the best and most practical method of obtaining COD statistics in these areas. […]

[…] Read more about the verbal autopsy series in this BioMed Central blog.  […]

[…] and Asia. Interviews were carried out with families or witnesses of the death (a process known as verbal autopsy ) and the results computer processed in a standard way. All the details are available for free […]