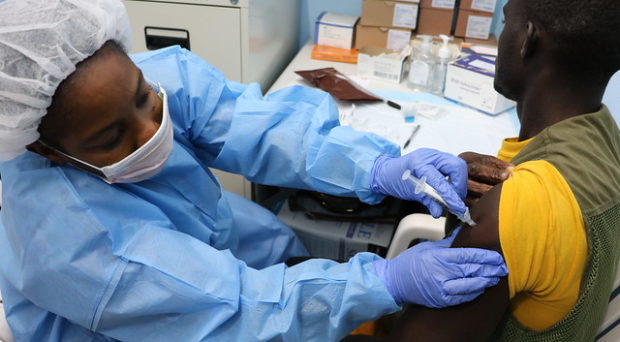 Ebola is a life threatening neglected tropical disease that has recently rose to prominence following multiple outbreaks in Central and Western Africa, and is thought to be a zoonosis transmitted by bats or other animal reservoirs. Up to three weeks following contact with infected animals, including primates or other humans, people develop symptoms of Ebola virus disease (EVD), including fever, body pains and aches, fatigue, diarrhea, and multi-system organ failure resulting in a mortality rate of up to 90%. Hemorrhage (bleeding) can also develop in numerous organs, but has been less common in recent outbreaks.

Success story of the current vaccine against Ebola

There has been significant recent progress in the area of Ebola vaccine research, which is especially important in light of the concerning trend for larger and more frequent EVD outbreaks (and the ongoing risk that the virus could be used in bioterrorism).

The first attempt at producing an Ebola vaccine began shortly after the discovery of the virus itself. This was based upon an inactivated whole virus, but was abandoned due to safety concerns. In 1996, an animal virus known as the “recombinant vesicular stomatitis virus” (VSV) was discovered to have limited human disease potential and could be easily manipulated by researchers for vaccine discovery. Today, it serves as the foundation of the most prominent Ebola vaccine showing near complete protection against Ebola infection.

In 2001 the Public Health Agency of Canada’s National Microbiology Laboratory began developing this vaccine, making it fit for human protection. The randomised controlled trials were then led by teams from Norway and the World Health Organization (WHO), with important Canadian contributions and funding. Results showed that no cases of Ebola were seen in the group that received the vaccine immediately, yet 16 cases were seen in the group that initially received the placebo, resulting in a 100% vaccine efficacy.

Given this success the recently FDA-approved vaccine (rVSV-ZEBOV, sold under the brand name Ervebo), was implemented extensively 7 days after the declaration of the current DRC outbreak on August 1, 2018; over 90,000 people were vaccinated shortly thereafter. A second vaccine from Janssen Infectious Diseases and Vaccines (J&J’s vaccine division) has also been launched in the DRC (the study is still ongoing).

Beyond promising vaccine candidates, new therapeutics have also emerged as a silver lining from the most recent DRC outbreak. Following the 2014-16 West African outbreak, the WHO investigated implementing new therapeutics in outbreak settings.

As a result, in 2018 when the DRC started experiencing an increased number of Ebola cases, they were well prepared to launch “Pamoja Tulinde Maisha” ( “Together Save Lives”). The model was an adaptive clinical trial randomizing Ebola patients to several antiviral and monoclonal antibody based therapeutics .

Preliminary results of reduced mortality rates and the discovery of a new therapeutic vector has led to a change in study methodology with EVD patients being randomized to 2 treatment arms only (including a recombinant monoclonal antibody and a promising triple monoclonal antibody), although this research is still ongoing.

Recent years have seen dramatic increases in the size and frequency of Ebola outbreaks. As human expansion continues into ecologies once occupied solely by our animal counterparts, and as human migration becomes more ubiquitous, we should only expect such outbreaks to increase. Fortunately, recent developments of highly efficacious and now-FDA approved vaccines and therapeutics provide promise of an enhanced ability to prevent and control future Ebola outbreaks.

The collective recent global experience with EVD also underscores that high quality, rigorous clinical trials can be conducted even in extremely challenging parts of the world during active emergency situations. Undoubtedly, EVD has exacted a devastating toll on West and Central Africa over the past 6 years, and it is unfortunate that only in the context of such decimation and loss of life have major scientific gains truly been made. The progress that has risen from these catastrophic outbreaks should inspire and motivate further rapid innovation and investment such that future disasters related to EVD may be averted. 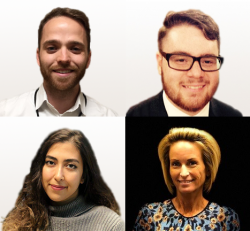 Dylan Kain is an internal medicine physician, currently finishing his last year of his infectious disease fellowship in Toronto. He has special interests in global health, tropical medicine and tuberculosis and plans to pursue a career in global translational tuberculosis research.

Michael Klowak is a full-time MSc Candidate at the Institute of Medical Sciences, University of Toronto, Toronto, Ontario, Canada. His main focus is exploring the relationship between neuropathy, nutrition, and leprosy in addition to researching various emerging neglected tropical diseases.

Arghavan Omidi is a recent graduate student from McMaster University, with an Honours Bachelor of Health Sciences. She has a research background in genomics, and to expand her scope, is active as a trainee in the Tropical Disease Unit with a research focus ranging from tropical viral agents to wilderness medicine.

Andrea K. Boggild is an Associate Professor in the Department of Medicine at the University of Toronto, and is the Medical Director of the Tropical Disease Unit at Toronto General Hospital. In addition, she is the Parasitology Lead for the Public Health Ontario Laboratory. As a Clinician Scientist, she leads international research collaborations in the field of tropical medicine.