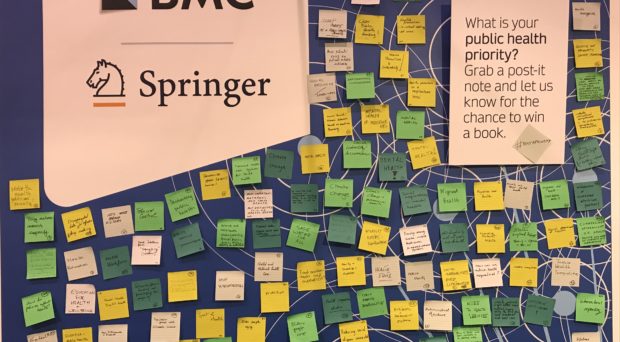 The Public Health Priorities of delegates from APHA and EPHC were showcased on Post-it notes at the Springer Nature exhibition stand.

One of the most exciting aspects of public health is the diversity of the topics covered by the field. Public health plays a part in almost all of the 17 Sustainable Development Goals and draws individuals from a wide range of backgrounds, but with limited resources and such large challenges it can be difficult to know where to begin.

Health Equity was considered by far the biggest public health priority for both European and American delegates. 24% of responses given at APHA and 20% of responses given at EPHC were related to health equity and covered a broad range of subtopics such as maternal health, migrant health, and geographical differences in healthcare access.

Another key topic that featured heavily at both conferences was mental health and suicide prevention. 11% of the European delegates and 6% of delegates in America chose mental health issues as their public health priority.

According to the WHO, mental health issues are the leading cause of ill-health and disability; however, the misunderstanding and stigma around mental illness is still widespread. More research and a greater spotlight on issues in mental health could help to tackle some of these problems. 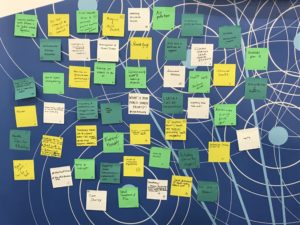 Whilst there have been some moves towards tackling climate change, such as the 2016 Paris agreement, this public health priority is often overlooked by policy makers as it can be hard to identify solutions to the problem without limiting economic growth. However, with the recent media coverage around climate change it is likely that this public health priority will become even more prominent in the future.

Whilst violence prevention remains a global issue, many of these responses tended to focus around gun violence and sensible firearms policy, which affects countries on varying levels. For example, half of all gun-related deaths in 2016 occurred within only six countries, Brazil, the United States, Mexico, Venezuela, Colombia and Guatemala.

This issue is starting to be addressed across the US, both in the media and by US lawmakers who have recently reached an agreement to fund gun-violence research for the first time in 20 years.

Vaccine hesitancy (also known as anti-vax) has become a growing issue with an increased number of disease outbreaks occurring across the world as a result of poor vaccination coverage. This public health problem was chosen by over 4% of the European conference and 0% of US conference delegates.

Vaccine hesitancy has seen a lot of attention in recent years with the WHO establishing an expert group ‘Measuring Behavioural and Social Drivers of Vaccination’ to address the reasons for under-vaccination.

Whilst these were the priorities that were mentioned most frequently, we received answers covering a whole range of topics from anti-microbial resistance to universal education and genetics in public health. Check out #postapriority for some other examples of the answers given. 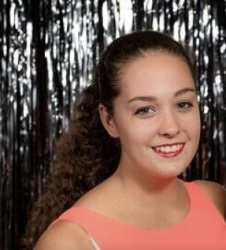 Frankie completed her BSc in Biological Science from the University of Birmingham. She joined Springer Nature in 2016 and now works as a Journal Development Editor at BMC, managing titles in global/public health.