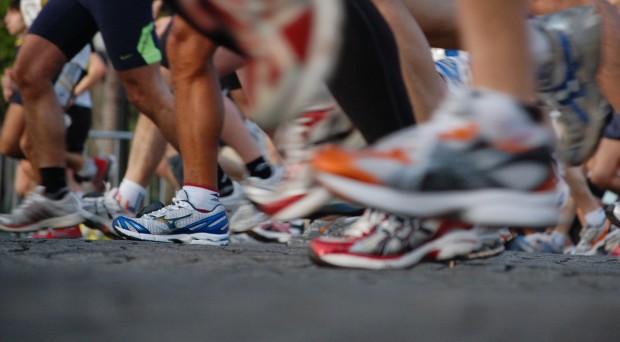 How do the shoes we wear affect our running technique?
Flickr

After deciding to sign up to my first marathon, I now find myself not too far from the day it’s going to be taking place. A scary but very exciting thought! Preparing for the marathon has been so challenging, and I decided to look at some of the research that’s been done in this area. Will it help me through the 26.2 miles?

Should I? Shouldn’t I? Should I? Yes I should! And that was that, decision made, Brighton marathon application sent, and I was a soon-to-be marathoner in training.

I’m absolutely up for the challenge of taking on a marathon. Having completed a few half marathons, among other running events, I was used to running, but little did I realize how hard it would be to push myself farther and farther each week, prepping for the full 26.2.

A popular exercise activity, but what are the risks?

As an exercise that is free, requires very minimal equipment and is easily accessible to everyone, running is one of the most popular forms of exercise worldwide. However, running-related injuries affect many runners, from beginners to ultra-marathoners.

A review found that novice runners are at greater risk of injury, so don’t jump straight into a massive run if you’re body isn’t used to it.

It’s important to take care of yourself when running and ensuring you recover well to avoid injury. A review found that novice runners are at greater risk of injury, so don’t jump straight into a massive run if you’re body isn’t used to it. You’ll only put yourself out and end up right back where you started.

This is why scientists are working to reduce and understand the risk caused to runners. Research published in Journal of Foot and Ankle Research explains how static foot posture is a risk factor for the development of injury of the lower extremity.

Injury risks associated with different foot types have guided the development of specific running shoes. Many running shoe shops now offer gait analysis so they can recommend trainers which are suited to your foot, compensating for any over- or under-pronation, hopefully reducing the risk of aches and pains.

Despite this technology, some say the best thing to do is to run barefoot! (Or mimic this with minimal footwear). I suppose when you think about it, the very first humans would have run like this way, way back in the day, so it would be the ‘natural’ thing to do.

Why should we wear shoes when prehistoric humans had nothing?

Why should we wear shoes when prehistoric humans had nothing? This was more than likely the time that running evolved in the first place – how else would we catch our food or avoid predators?

In fact, other research has found that those running in cushioned shoes actually experience increased pressure in the foot, compared to those running barefoot – leading to increased risk of injury.

According to this review, running barefoot causes you to land slightly more on the ball of your foot (known as a forefoot strike). This has been suggested to reduce the risk of injury by minimizing the impact of your foot as it hits the ground.

Further work showed that those landing on the heel of their foot (rearfoot strike) incurred more injury than those with a forefoot strike. So keep an eye on your technique!

Could choosing more minimalist footwear be beneficial? And could the way you land your feet lower the impact to the joints in your foot and leg?

Although running barefoot around the tarmacked roads of Brighton during the marathon doesn’t sound appealing (ouch!), could choosing more minimalist footwear be beneficial? And could the way you land your feet lower the impact to the joints in your foot and leg?

When I first started running I used to get a slight pain in my knee. An injury that’s so common in runners it’s known as ‘runners knee’, or ‘Patellofemoral pain syndrome’ to scientists.

Yet after being advised (by someone who had read ‘Born to Run’ – a great book, highly recommend if you’re into running!) to land my foot slightly ‘toe-first’ this ache completely disappeared and has not returned since. Whether I got lucky, or this is actually down to the way my technique changed, who knows!

Research is in the early stages, so don’t panic if your marathon is this weekend and you’re not landing with a forefoot strike! Everyone does run differently and there are many other factors that could play a role in causing injury. Just go out and enjoy the race, good luck!