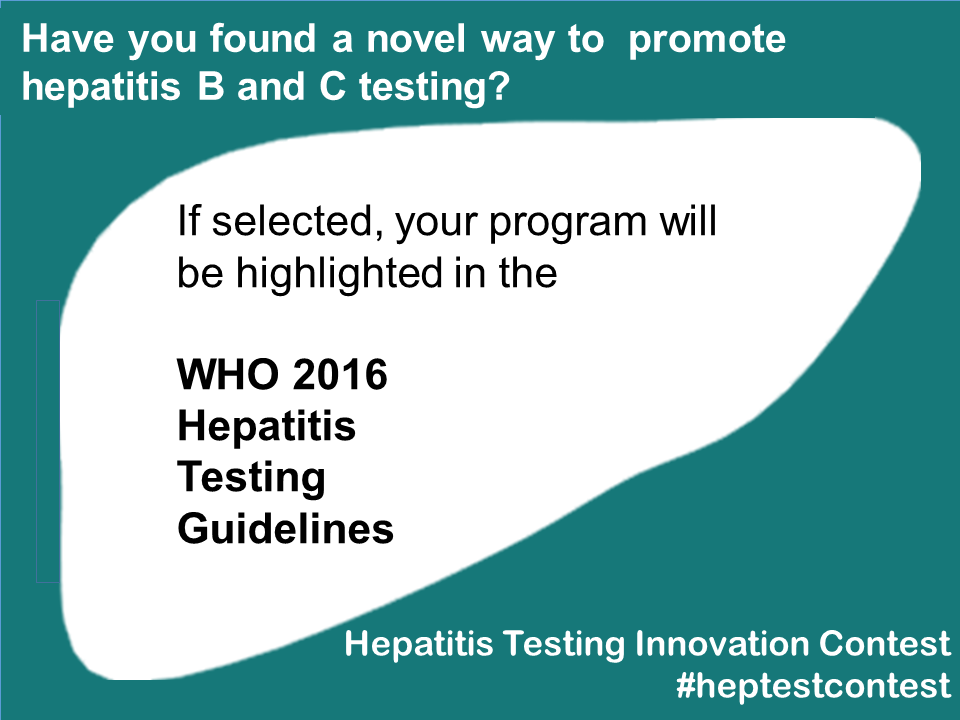 The Hepatitis Testing Innovation Contest, which is accepting submissions until 1 March 2016, feels like a welcome breath of fresh air. Social Entrepreneurship for Sexual Health (SESH) organized the contest in collaboration with the World Health Organization’s Global Hepatitis Programme to highlight novel ways that service providers have found to increase hepatitis B virus (HBV) and hepatitis C virus (HCV) testing.

Winning entries will be included in the forthcoming WHO hepatitis testing guidelines. This is a terrific way, in my opinion, to tackle the problem of undiagnosed HBV and HCV – one of the greatest obstacles to reducing liver-related illness and death worldwide.

News of the contest got my creative juices flowing. As I walked over to the University of Barcelona last week, I found myself wondering if some future testing initiative might build on the example of BCN Checkpoint, a programme that is well known in Barcelona’s communities of men who have sex with men.

I was recalling what Ferran Pujol, the director of BCN Checkpoint, once told me about how his community-based programme had stumbled upon a strategy that helped to almost triple the number of HIV tests administered.

What if the testing counselor is a celebrity?

That made me wonder about the concept of a ‘celebrity’ testing counselor – might it perhaps be a replicable model?

I floated the idea to Ferran, who continues to oversee BCN Checkpoint. He immediately noted that the programme’s ongoing popularity – almost 7,000 HIV tests administered in 2015 – is not being driven by a 2009 beauty pageant.

“BCN Checkpoint is known for the low barrier to get tested, peers who are able to talk about sexuality, no judgments on how many times you want to get tested, and the increased number of services and technology,” he said.

Achieving sustained population-level viral hep testing increases will require more than clever concepts. I anticipate that testing interventions that make an impact in the coming years will provide models of innovation and also be built on the same tried-and-true principles that Ferran identified.

In other words, the way forward is to innovate and integrate the best of what we’ve learned about people-centred public health.

For information about how to enter SESH’s Hepatitis Testing Innovation Contest, go to http://www.seshglobal.org/heptestcontest/. The contest deadline is 1 March 2016.

Unfortunately, we are still dealing with the stigma of hepatitis and the fact that most folks have no signs or symptoms and are unaware of their infection.

Identifying risk factors is essential but providing the rationale for assessing their own risk behaviors is mission. Liver health education is missing in most schools and individuals have no idea about the important role their liver plays regarding their health and life itself.

Compare liver cells to the micro chips in your cell phone. Liver cells need the food you eat to enable them to perform over 200 complex chemical reactions converting the food you eat into life sustaining body functions 24/7.. These include making strong bones and muscles, immune and clotting factors, hormones and enzymes and dozens of additional life sustaining body functions.

Viruses, alcoholic, drugs, fatty and sugary foods and fumes breathed in can all cause liver cells to die. Dead liver cells are called cirrhosis.

Once folks realize just how damaging hepatitis viruses can be to their health and life itself, they are more apt to seek testing and potential treatment. . and to prevent the spread of the virus to their loved ones.

Liver health education is essential to increase the number of folks seeking testing.
For more information about preventing hepatitis and other liver related illnesses including obesity, fatty liver, diabetes, cardiovascular disease that can cause heart attacks and strokes.

Thank you so much for that thoughtful reply. You are absolutely right and it is fantastic that you continue to play an important role in hepatitis awareness.
Jeff