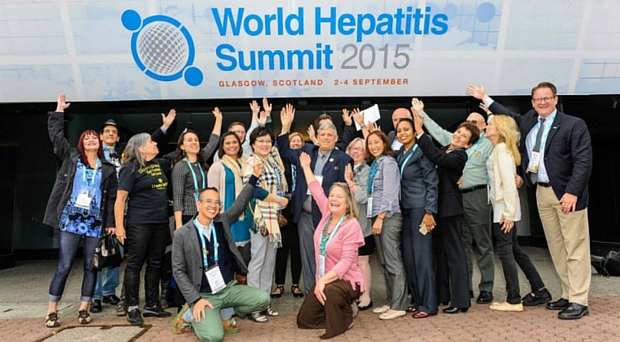 Delegates representing hepatitis patient groups from around the world couldn’t be happier to gather in Glasgow.
Simon Williams Photography, Edinburgh

As I watched the opening session of the first-ever World Hepatitis Summit on 2 September 2015, I found myself wondering with no small degree of awe: How does it feel to be making history?

A bit later, when I came across this photograph on the World Hepatitis Alliance’s Facebook page, I realized that it probably feels exhilarating. Look at those smiles. How often do people destined for three days of sitting under fluorescent lights in soulless conference halls seem so delighted to be there?

A bit of background, for those readers who are not up on the World Hepatitis Summit. This event is taking place in Glasgow, Scotland on 2–4 September 2015. It is remarkable for bringing together four key sets of actors in the global response to viral hepatitis: patient groups, national governments, the World Health Organization (WHO) and the pharmaceutical industry.

After the dust has settled on the 2015 World Hepatitis Summit, I have no doubt that it will be remembered as a major milestone in the global movement to end viral hepatitis.

That’s right, representatives of all of these entities are gathering in one place for a series of discussions that can be expected to have a defining effect on how viral hepatitis is addressed by the global community going forward. After the dust has settled on the 2015 World Hepatitis Summit, I have no doubt that it will be remembered as a major milestone in the global movement to end viral hepatitis.

What further distinguishes this event is its patient-driven nature. The World Hepatitis Summit was co-organized by the World Hepatitis Alliance, WHO and the Scottish Government. WHO and the Scottish Government deserve high praise for stepping up to help make the Summit happen, but it is the contributions of the Alliance that set this event apart from other strategic gatherings in the field of hepatitis – and perhaps in the health sector overall.

The Alliance is made up of hepatitis patient groups located in dozens of countries worldwide. By playing a central role in convening the Summit, the Alliance has ensured that hepatitis patients have a proper seat at the table. Their priorities and concerns are represented in quite obvious ways throughout the three-day programme.

Based on my observations of the dynamics thus far, it is safe to say that everyone in attendance – from government representatives to high-level WHO officials to delegates from major pharmaceutical companies – regards the patient groups representatives as serious partners in the effort to improve the global response to viral hepatitis. I am hard-pressed to name another multi-stakeholder global health event where community members have driven the agenda to the extent that they are doing so here.

And although the Summit has been a long time coming, the truth of the matter is that many of the patient groups have been working effectively in their home countries for years if not decades – they simply lacked the resources to combine their voices to influence the global discourse in this way until now.

Take, for example, Summit delegate Clint Ferndale. I was made aware of his longevity in this field when his colleagues back home at Hepatitis Queensland in Australia used the Summit’s Twitter hashtag (#hepatitis 2015) to share a message. While Ferndale was away at the Summit, cake was being served at a staff meeting to celebrate his 10-year anniversary as the Hepatitis Queensland CEO.

Ferndale and hundreds of other people have been laboring unrecognized for years – in some cases, even decades – to improve the lives of people with hepatitis in their communities. The year 2015 may be remembered for the coalescence of a global patient-driven hepatitis movement, but let’s remember that it did not spring from nowhere. Its roots run deep, which means that it is poised to capitalize on an abundance of experience and wisdom.