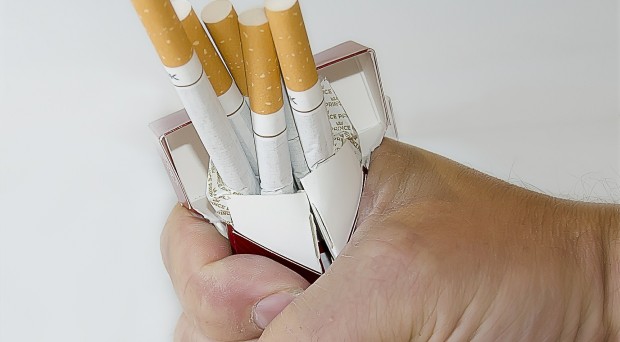 Peter Hajek, from the Wolfson Institute of Preventive Medicine at Queen Mary University of London, is a leading expert on the behavioral and pharmacological treatments associated with giving up smoking.

We asked Peter more about the treatments that are currently accessible to smokers trying to quit, the work that he has published on the topic and what he thinks the future will bring for smoking cessation.

Why did you decide to specialize in this area of research?

After working in the more traditional clinical psychology areas concerned with talking treatments and group therapy for anxiety and personality disorders, I joined Michael Russell’s team at the Institute of Psychiatry in London, UK, in 1982. His unit was the global hub of cutting edge research in tobacco dependence and its treatments at the time.

There was a considerable buzz around producing genuinely new knowledge on, for example, tobacco withdrawal symptoms, smokers’ motivation, and new treatment approaches. Research with smokers also turned out to be fun and rewarding. Untypically for a group which carries a psychiatric label, a good proportion of dependent smokers are well adjusted and easy going individuals with a good insight into their dependence.

We were generating information and treatments that were making a difference not just for a single individual or a small group, but on a population scale. My current Health and Lifestyle Research Unit is involved in other areas of research as well, such as weight management. However tobacco dependence, and especially research which translates into policy and clinical practice, continues to be our main focus.

What are the main treatments available to patients who wish to stop smoking?

In general terms, dependent smokers can benefit from several types of behavioral support, especially where these psychological approaches are combined with smoking cessation medications of which there are several types as well. The licensed medications currently include nicotine replacement treatments such as nicotine patches and chewing gum, bupropion and varenicline.

Cytisine and electronic cigarettes (e-cigarettes) have not passed the licensing hurdles yet but are also effective. In the context of the NHS Specialist Stop Smoking Service which treats over 600,000 smokers a year, we know which of the licensed options work best, at least in the short term, as the service collects outcome data.

Regarding behavioral treatments, the best results seem to be achieved with group support and with medications, varenicline seems to be in the lead.

Can you briefly describe some of the key clinical trials of interventions for smoking cessation that you have published?

I have been fortunate to be involved in several early studies of treatment of people seeking help with tobacco dependence and this provided a starting point for a body of research that is still on-going. Over the years, with a few key collaborators including Robert West and Hayden McRobbie, we have tested a number of treatments, behavioral and pharmacological, with some showing no efficacy and others proving useful.

In improving treatments, negative results are as important as the positive ones, but it is the positive results which get the limelight and so I will focus on those. Early on we demonstrated feasibility and efficacy of smokers’ clinics providing treatment in the community, work that paved the way for the establishment of the NHS Specialist Stop Smoking Service in England in 1999.

Another early study developed and evaluated a format of group support which has become a standard treatment approach in several countries. Regarding pharmacotherapies, I was involved in the first pivotal studies of several treatments that are now used worldwide. These include nicotine nasal spray, nicotine inhalator, nicotine lozenge, varenicline, and more recently nicotine pouch and nicotine mouth spray.

some medications can be more effective for some smokers if used over a longer pre-quit and for others, if used over an extended post-quit period

We have also shown that some early limits on using stop-smoking medications were over-cautious and that some medications, such as varenicline, can be more effective for some smokers if used over a longer pre-quit and for others, if used over an extended post-quit period and that nicotine replacement treatment can be used safely over long term.

We are currently evaluating whether wearing nicotine patches over four weeks prior to quitting makes cigarettes less rewarding and facilitates quitting, and are involved in several studies looking at the efficacy of e-cigarettes.

Electronic cigarettes have received much attention and controversy – how do you think this debate will be resolved?

E-cigarettes are the most important development so far, not only in the treatment of tobacco dependence, but in tobacco control generally. If e-cigarettes are allowed to continue to compete with conventional cigarettes and develop further so that they give more and more smokers what they want from their cigarettes, smoking could virtually disappear.

As e-cigarettes are at least 95% safer than cigarettes, with nicotine by itself posing limited or no health risks outside pregnancy, it would seem that there is nothing not to like about such a scenario. Unfortunately though, policy-makers around the world have been influenced by misleading claims from a range of vested interests and people with misguided ideology.

It is likely that the population-wide switch from smoking to vaping will be prevented or at least considerably delayed by drastic and unwarranted regulation. Some countries such as Brazil, Egypt and Canada have banned nicotine-containing e-cigarettes, while allowing sales of cigarettes. USA and the European Union are poised to regulate e-cigarettes much more strictly than conventional cigarettes.

A new European ruling will for instance outlaw, without any rational justification, the type of e-cigarettes dependent smokers find most useful, and submit manufacturers to an extensive range of expensive regulatory demands that are far in excess of what is demanded from manufacturers of cigarettes. This raises alarming questions about the way public health arguments are presented to regulators.

The arguments for and against more liberal e-cigarettes regulation have been outlined in a number of commentaries, including the recent ‘pro’ and ‘against’ statements in BMC Medicine which the launch of a new article collection on promise vs perils of electronic cigarettes highlights.

What are your thoughts on anti-e-cigarette campaigns?

I understand, though do not approve of, the anti-e-cigarette campaigns driven by commercial motives. It is harder to comprehend campaigners motivated by misguided ideology. It is patently obvious that disseminating misleading scare stories about e-cigarettes puts smokers off making the switch to e-cigarettes which would undoubtedly benefit their health. Yet the anti-e-cigarettes proclamations are becoming more extreme.

Representatives of some well known public health and medical bodies in the UK and USA went on record with assertions that e-cigarettes are as harmful as or even more harmful than cigarettes. This kind of deception must be in breach of professional ethics, whatever the motivation behind it.

It would appear that what is behind this activism is an entrenched belief that nicotine use by itself, even if it is not associated with any ill effects, represents a sinful or corrupting indulgence and should not be allowed. Paradoxically, people who hold this belief see no problem at all with their own mild dependence on coffee and recreational use of alcohol.

I’m sure that such individuals do not consciously intend to protect the market dominance of cigarettes or to undermine healthier options smokers now have, but this is what they are doing and it does no credit to individuals and organisations that proclaim interest in improving public health.

What are the future directions in helping smokers quit?

If e-cigarettes are allowed to continue evolving and competing with conventional cigarettes, and if medical professionals and the media inform smokers truthfully about their harms relative to smoking, there is a good chance that within the next ten years smoking will be obsolete and some years later, smoking-related death and disease will virtually disappear.

It is possible though not certain that nicotine use would continue, predominantly in people who would otherwise smoke, but with little or no risks attached, it would gradually come to be seen in the same light that caffeine use is seen today.

It is a pity the organisations that want to get smokers off cigarettes cannot see the benefits of e-cigs or Safer Electronic Nicotine Delivery Devices. They can’t help themselves but to see SENDDs as a replacement, therefore (in their minds) they see vaping as equivalent for smoking regardless to the boon to health offered.

I know someone in the past who forced himself to quit smoking and it had a negative effect on him. He suffered a depression and was afraid to go out of his house and be in the public. If only the public is aware of the existence of e cigarettes in the past and the useful things it can do for someone who wants to quit smoking, effects such as these could have been prevented.

We have the same situation here in Germany where a handful of well established institutions (e.g. the cancer research institutions) have a big influence on the policy makers in government. They heavily lobbied against the e cigarette with arguments that are bordering towards the ridiculous with the result that policy makers became quite restrictive in implementing the TPD2 into national law. Currently there is even a draft from the ministry floating around where they might ban many flavors, the most important of which is menthol (present in pretty much every e liquid). I seriously hope this will not become part of the law, otherwise it could have quite a negative impact.

Thanks, good read! It underlines exactly my opinion. Although this article is from may last year, the discussion if e-cigarettes are an alternative to traditional ones is still going on. Nevertheless I don’t think that the revolution of e-cigarettes has the power that smoking-related death and diseases will virtually disappear. But it is an good alternative!

Senior Editor at BioMed Central
Ursula obtained a PhD from the University of Kent at Canterbury in brain biochemistry. She has post doctorate research and lecturing experience in psychiatry and neurobehavioural disorders with specific interest in neuropharmacology, molecular biology/genetics and functional genomics. In 2012, she moved into the publishing world to join the BMC Medicine team as a Senior Editor.