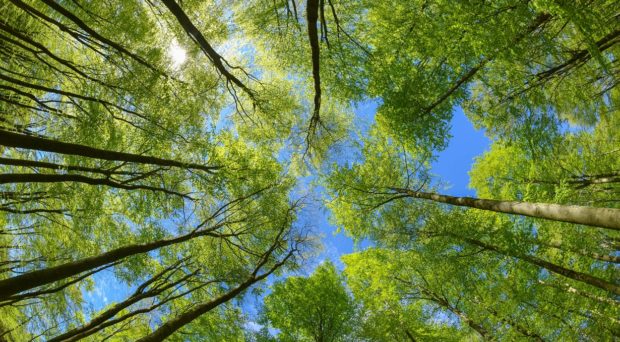 It almost goes without saying that trees and their associated ecosystems are among the most important life forms on Earth. Readers may be surprised that in the UK only 13% of its landmass is covered by forests (making it one of the least-forested countries in Europe) and more than two-thirds of these forests are in private ownership.

There is a commonly-held perception that these landowners are traditional in mindset, and reluctant to accept some implications for the impacts of environmental change or to adopt novel approaches in their land management. An example of a behavior to provide for environmental change is for forest owners to diversify the composition of tree species, whether at the genetic level (variation within species) or the species level by considering new species, including non-natives or less traditional choices.

We were interested in the worldviews of forest owners and managers, as measured by the New Ecological Paradigm (NEP). This is a concept which distinguishes between a pro-ecological worldview that recognizes anthropogenic impact on the environment, and a dominant social paradigm which is a worldview more anthropocentric and materialist with a utilitarian attitude to the environment. We wanted to explore how these worldviews interacted with a distrust in science or policy recommendations, something which we termed ‘discredence’.

We developed a conceptual framework (see Figure 1) to show the influence of worldview and discredence on awareness, aspiration, and action among woodland managers for adaptation measures that would support more resilient forests, woodlands and trees across the landscape, i.e. resilient treescapes.

For our data, we drew upon the UK-wide British Woodlands Survey, administered by the Sylva Foundation, plus semi-structured interviews to gather qualitative information from some respondents.

We discovered that where owners and managers of the smallest woodlands (up to 5 ha) had a more utilitarian worldview, there was a greater chance of them actively putting in place adaptation measures such as diversifying tree species. Among managers of larger woodlands (greater than 50 ha), the interaction worked the other way around, i.e. a less utilitarian more ecological worldview, the greater the chance that changes in forestry practice were being made.

A distrust of science and policy appeared to influence what owners and managers of small- and medium-sized woodland (up to 50 ha) did. The greater the feeling that information, advice and support measures were representative of these managers’ beliefs and operating contexts, the greater the chance they were adapting through species diversification.

Risk and uncertainty emerged as significant additional factors affecting decision making and practice, as they have in similar studies. The apparent lack of diversity of the timber industry to modify processing, marketing, and end uses to accommodate changes in forest management practices, such as diversification to novel and alternative species, was noted as a significant barrier to change amongst owners and managers of larger and medium-sized woodlands, irrespective of owners’ and managers’ worldviews or acceptance of recommendations for adaptive practice. To support adaptation in these circumstances will require societal transformation.

Our identification of representation in policy, practice and research being linked with discredence, was an important finding. We believe that providing information and knowledge through traditional models, e.g. print material or technical talks, are not a panacea that will help land owners move from awareness of what might be done, to actual adaptive actions.

In future, moving to participatory and flexible models of learning is likely to be effective, particularly for smaller-scale land owners and managers. In combination with strategic policy development and communication at the highest levels to influence societal beliefs, such ‘grass-roots’ and targeted approaches are likely to be the most effective in transforming our ability to nurture our forests and other land uses, in a way that will both help them adapt to environmental change and help protect us from ourselves.

Gabriel Hemery works as CEO of Sylva Foundation, an environmental charity working to bring people and trees together. He leads the British Woodlands Survey and a number of forestry and social science projects. He is also a published author and semi-professional photographer of trees: www.gabrielhemery.com; @gabrielhemery
@SylvaFoundation @FR_SERG @UniofOxford