When Europeans first arrived in Van Diemen’s land more than 200 years ago, their sleep was interrupted by the mysterious and unearthly screeching of a black and white animal with ferocious teeth and red ears – they called it “the Devil”. The modern scientific name of the Tasmanian devil is Sarcophilius harrisii or “Harris’ flesh-lover”. Devils are the world’s largest carnivorous marsupial and are only found in the island state of Tasmania. Once common throughout the landscape, this species is now endangered due to an infectious clonal cancer, devil facial tumor disease (DFTD). First observed in the north-east of Tasmania in 1996, the disease has since swept south and westwards, decimating devil populations. Over the past 20 years, there has been an 80% decline in the species. Many believe that this decline is driven by the very low genetic diversity of devils as they have been genetically bottlenecked at least 3 times in the past 20,000 years.

In order to combat the disease threat, the Tasmanian and Australian governments partnered with the zoo industry in 2006 to start what was to become Australia’s largest insurance population. Early predictions estimated the species would be extinct from the disease within 25-30 years. Between 2005 and 2008 over 120 disease-free devils were brought into captivity. What started with four zoos and 28 devils has now grown into an insurance metapopulation encompassing over 700 disease free devils in 37 zoos and wildlife parks, an island (Maria Island), and a fenced peninsula (Forestier Peninsula). The aim of this insurance metapopulation is to maintain genetic diversity of the species, and their associated commensal biota, until such time that the species can be returned to the wild.

Fortunately for the species, populations that have been decimated by the disease for over 20 years are still persisting in the wild. Now the species is under threat from all the other threatening processes including habitat fragmentation, roadkill, attack from dogs, and climate change. How do we ensure that devils continue to remain in the wild when they have inherent low genetic diversity and live in a fragmented landscape? One solution is to use animals from the insurance metapopulation and release them to wild sites to help promote gene flow and improve genetic diversity.

There are many aspects to assess when selecting individuals for release, including sex, age, genetic diversity, behavior, and general health. Recent research into humans and livestock has shown the importance of microbiome to overall animal health. A study in 2015 into Tasmanian devil microbiome showed significant differences between captive and wild devils. Specifically, captive devils have lower microbial diversity, which can potentially lead to problems such as increased risk of obesity, poor breeding success and higher risk of infections. Despite being given food and environmental enrichments that mimic their natural diet and habitat, life in captivity can still be very different, resulting in changes to the microbiome. This has been observed in many other species that are kept in captivity.

So, if their microbiome was changing as a result of captivity, what impact would this have on the devils once released to the wild? In our recently published article, we examined whether captive devils can reacquire a “wild-type” microbiome after returning to the wild. To answer this, we needed to track the changes in the devil gut microbiome after they are released into the wild. The field team and I collected scat (or poo) samples from the release devils before, during, and after the releases, and compared them to resident devils at each release site. Using poo samples is an excellent way to study the gut microbiome, especially in endangered species like the devils because it is non-invasive and requires minimal animal handling. They are also great for studying devil genetics, parasites, diets, and other parts of the gut microbiome, such as viruses. The tricky part however, is catching the particular animals you are after, and relying on them to produce a fresh poo sample when you need them to. Another major challenge with collecting poo samples in the field is finding ways to store them properly to minimize degradation. Lucky for us, the cold Tasmanian winter kept the samples relatively cool until we can store them in the freezer at the end of each field day. Back in the lab, I spent hours extracting bacterial DNA from each poo sample, making sure there are no cross contaminations between samples. After a few weeks at the sequencing center, a folder containing all the DNA codes was sent to me to decipher.

After comparing the microbiome of the released devils at different time points and with the resident wild devils, results were encouraging. The gut microbiome of the captive release devils underwent significant changes as early as 2 months after the release and began to look a lot like the microbiome of resident devils in the wild, regardless of where they originated from. This suggests to us that the microbiome disturbances previously observed in captivity are likely reversible and may not pose a threat as serious as previously thought. This is good news for the devils and perhaps other carnivorous species with similar lifestyle and diet that are also experiencing microbiome disturbances in captivity. Translocation is often used in wildlife conservation as a way to restore dwindling populations in the wild but success rates are usually low. Captive-born animals often differ from wild-born animals in their behavior and even microbiome, which can potentially affect their survival post-release. We hope this work will highlight the value of microbiome monitoring as a tool to assess wildlife health after translocation. 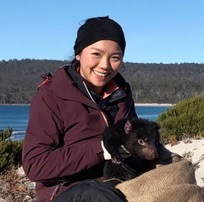 Rowena is a final year PhD student from the Australasian Wildlife Genomics Group at the University of Sydney. Her research is focused on using various genetic tools to study the gut health of the Tasmanian devils to assist the conservation of the species. Her passion lies in the conservation of wildlife and inspiring others to take part through science communication and outreach.Her Twitter handle is @RowenaChong828