As I discuss extensively in my recently published review paper in Cell Death & Disease, starvation-induced pseudo-diabetes is associated with lifespan extension and better health. Although the state of pseudo-diabetes has several of the hallmarks of diabetes, it is not true diabetes and does not cause diabetic complications. For this reason, I introduced the term benevolent pseudo-diabetes, or benevolent glucose intolerance (coincidentally, my last name is translated in English as ‘benevolent’). Furthermore, rapamycin, a drug which mimics many of the effects of starvation, prevents diabetic nephropathy and was shown to have activity against atherosclerosis, obesity and retinopathy in rodents. Perhaps, the term pseudo-diabetes may still cause confusion. Would we choose then the term benevolent glucose intolerance?

In 2006, I published an article arguing that aging is a quasi-program (an aimless continuation of developmental programs) driven in part by mTOR (Target of Rapamycin).  This theory holds that pharmacological suppression of aging and age-related diseases could be accomplished by inhibitors of mTOR.  By sheer luck, mTOR inhibitors were clinically available in the form of rapamycin and its analog everolimus, both of which are FDA-approved drugs used by millions of patients with conditions ranging from organ transplants to cancer. As I summarized then: “…all diseases of aging from osteoporosis to Alzheimer’s may be treated with rapamycin. Finally, rapamycin will be most useful as anti-aging drug to slow down senescence and to prevent diseases.”

In 2009, a pilot study by Harrison et al. demonstrated that, even when used late in life, rapamycin slows aging and significantly extends life spans in mice. Since then, many independent experiments have further confirmed lifespan extension via use of rapamycin in dozens of mice strains and model organisms.

Unfortunately, the anti-aging application of rapamycin and everolimus was halted after “dangerous” metabolic effects of rapamycin in mice were reported. In a few mouse strains, chronic treatment with rapamycin can cause glucose intolerance with or without insulin resistance.  Interestingly, identical warnings were also issued for ketogenic diets and even stringent weight reduction. In particular, it was warned that a ketogenic diet leads to features of type 2 diabetes.

Despite the frightening warning based on mouse research, low carbohydrate diets, including ketogenic diets, very successfully prevent and treat type 2 diabetes in humans. Furthermore, a very low calorie diet can reverse type 2 diabetes, causing remission of diabetes at early stages. How can treatments that prevent type 2 diabetes cause diabetic-like symptoms by themselves. And what do rapamycin, starvation and ketogenic diet have in common?

It was discovered 173 years ago that prolonged fasting causes starvation-induced pseudo-diabetes. As Claude Bernard put it “If a man or an animal is fasted for some time, and then given a good meal with an abundance of carbohydrate, glucose will appear in the urine” (as cited by Lundbaek, K 1948). During starvation, the body does not utilize glucose, saving it for the brain, and switches to fatty acids and ketones as fuel. Prolonged fasting is characterized by low insulin levels, ketosis, lipolysis, gluconeogenesis and even insulin resistance. Glucose tolerance tests are impaired: glucose ingestion leads to hyperglycemia and glucosuria (glucose in the urine).

Overactivated mTOR causes insulin resistance via a feedback loop, which can be abrogated by acute rapamycin treatment in different models including human volunteers. Acute or intermittent rapamycin treatment, like short (overnight) fasting, is not manifested by glucose intolerance. Chronic treatment with high doses of rapamycin may cause glucose intolerance in some cases. Most importantly, it was not observed in healthy humans and is considered a mild and reversible side effect in cancer patients treated with rapalogs. Given that rapamycin-treated animals and humans consume carbohydrates, hyperglycemia may be observed, but only in some cases. I speculate that in addition to genetic background, the diet determines the outcome. Humans adhere to their individual diets, while treated with rapamycin. One can speculate that low carbohydrate/calorie diets preclude hyperglycemia during chronic rapamycin treatment, even if insulin levels decrease. This needs investigation whether a combination of chronic rapamycin with a ketogenic diet and prolonged fasting will not cause hyperglycemia in mice, in which rapamycin alone does.  A combination of diets and rapamycin may have the potential to maximize life extension, while minimizing side effects, even if these side effects are benevolent. 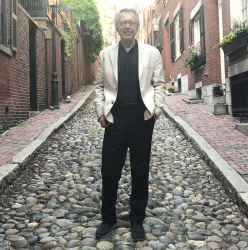 Mikhail V. Blagosklonny, M.D., PhD, Professor of Oncology at Roswell Park Cancer Institute, Buffalo, NY, USA, is an author of more than 250 scientific papers on cancer and aging, with h-index 93 (google scholar). Currently, he serves as Editor-in-Chief of Cell Cycle, Oncotarget and Aging.