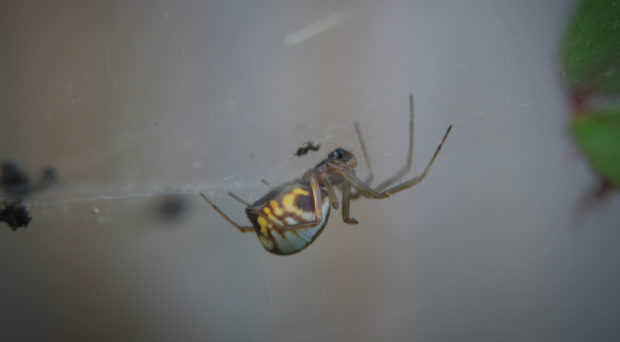 A recent innovation in the study of population dynamics has been the development of “DNA barcoding techniques” which allow detection of prey DNA from predator samples, or in wider separation of multiple DNA sources from a single sample. Effectively telling us what critters constitute a food web, by looking in the guts of the predator at the top! Understanding what’s eating what and how energy transfers around an ecosystem is extremely important to the management of natural and agricultural ecosytems.

This innovative technique has been expanded into a new “DNA metabarcoding approach”, by the authors of a recent paper in Zoological Letters. They wanted to demonstrate how a food web was structured above and below ground by studying multiple spider species in a single area, and realised that many of the spider species prey on both below- and above-ground prey through their new protocol.

So, how did they figure this out?

Obviously, picking prey DNA out of abundant predator DNA is difficult – so the authors designed PCR primers that could effectively “filter out” the DNA of Hexapoda (insects and other arthropods) from Araneae (spiders). For the most part, this worked brilliantly – with only a few refinements needed to also distinguish Lepidopteran prey (insects like butterflies and moths) and Hemiptera (the order which contains cicadas and aphids).

Once the primers were developed, the researchers made their way to a deciduous forest on Mt. Yoshida in Kyoto, Japan to collect the spiders – 26 species in total! Extracting the DNA, they then analysed each sample in turn. Collating, and curating, the data required bioinformatic analysis, but they were eventually able to produce a visually-represented food web – displaying all the Araneae-Hexapoda associations detected from their sampled spiders.

When looking at the data it becomes incredibly clear that a technique like this can show how spider communities as a whole drive ecosystem processes – spiders eat such a diverse taxonomic array of insects, which can impact populations of various prey species. They also eat insects at many different trophic levels – herbivores, fungivores and even parasitic insects. It’s still unclear whether the spiders are eating the parasites directly, or rather the parasites have already parasitized the insects the spiders are actually eating, and higher sample numbers will be useful in future to determine which spider species are overlapping in their predation of particular niche species. Combining studies like this with ecological observations will give a completer picture of the food web in an ecosystem.

The great takeaway from this study, however, is that with refinement, this technique could allow researchers to determine predator-prey interactions in an environment (at least, on a molecular level!) in a matter of days!

Journal Development Manager at BMC
Alexander looks after BMC's animal and plant journals, with a special focus on marine sciences. On his downtime he can be found at live music and comedy, or running RPG's.