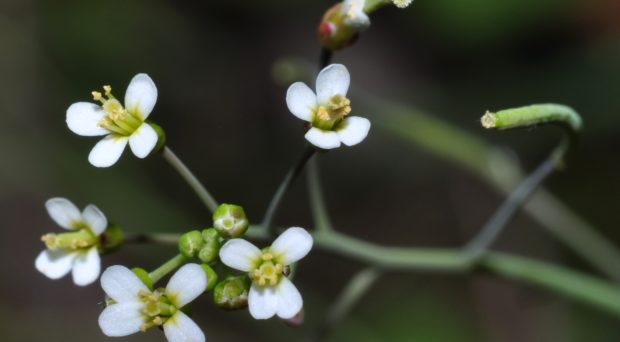 Because plants are able to pause their life cycle as dormant seeds, germination requires going from complete metabolic dormancy to a metabolically active, growing seedling. Regulation of gene expression at this stage is dependent on major changes in the epigenome – including DNA methylation reprogramming, transposon silencing, and expression of small RNAs.

DNA methylation – how it happens

DNA methylation is a modification that affects gene expression, transposon activity, and the formation of heterochromatin. In plants, DNA methylation occurs at cytosines in three distinct contexts: CG, CHG, and CHH (where H = C, A, or T).

In the model plant Arabidopsis thaliana, four DNA demethylation enzymes have also been studied: DME, ROS1/DML1, DML2, and DML3. DME is required for genomic imprinting in the endosperm, while the other demethylases are active in vegetative tissues.

The processes of DNA methylation and demethylation are constant in cells, and generally balance each other out.

By comparing early and mature embryos (4-day-old vs 10-day-old, respectively), Daniel Bouyer and co-authors observed increased overall DNA methylation in mature embryos, mainly caused by elevated CHH methylation. The differences in CHH methylation seen in early vs mature embryos is most pronounced in the transposable element-rich, gene-poor pericentromeric regions, suggesting distinct methylation dynamics along the chromosome as the embryo develops.

In their article, Joseph Ecker and colleagues tease apart the dynamics of global methylation reprogramming during seed development (4-18 days after pollination) and germination in Arabidopsis plants. They look at single-base resolution methylomes of seeds at the seed/embryo development and germination stages, as well as in the growing plant.

They also find an increase in CHH methylation in the developing embryo, peaking in dry seeds compared to other stages in the germination and developmental processes. Most of the methylated CHH sites in both embryo development and in germination overlapped with transposable elements.

During germination, global demethylation occurs independently of the DNA demethylation enzymes, since these are weakly (or not at all) expressed at this stage. The observed demethylation likely happens passively during cell division.

The authors found over 24 000 genes that were differentially expressed during germination compared to dry seeds, many of which have light-related or root-related functions. Meanwhile, genes with RNA splicing and histone functions were highly expressed in dry seeds. In fact, widespread alternative splicing of transcripts was observed, and likely has a large contribution to transcriptome reprogramming during germination.

Over the germination time course, there are also over 10 000 sRNA loci that are differentially regulated. Most of these were found overlapping with transposable elements and differentially methylated regions in the genome, particularly those that were depleted in CHH methylation. This all suggests that the methylation and expression patterns seen at these loci in germination are due to changes in the activity of the RdDM pathway.

Integrating new information about histone dynamics and the role of other epigenetic enzymes with this information will give us an even more complete picture of the epigenetic dynamics involved in seed development and germination.

These three articles were published as part of Genome Biology’s special issue on Plant Epigenomics. Read the rest of the collection here.