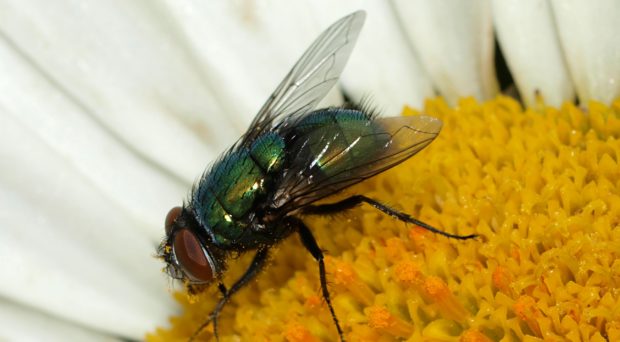 Sexual communication signals are relied upon by mate-seeking animals to facilitate mate encounters. These signals come in diverse forms such as visual, olfactory and acoustic, with different species using specific signals or specific combinations.

Male common green bottle flies appear to be able to detect the frequency of these flashes and are strongly attracted to a wing-flash frequency of 178Hz, a characteristic of free flying young female flies.

In the eye of the beholder

The compound eyes of flies play a key role not only in flight, but also in mate recognition.

With females ‘flirting’ with these wing-flash signals how are males expected to pick up on them?

Flies have some of the most advanced visual systems among insects. The fast visual processing that they are capable of is thought to be an adaptation that evolved to support their advanced flight abilities.

There is also sexual dimorphism, with males having larger eyes that feature ‘bright zones’ to help capture light. This would allow males to better detect the wing flashes of female flies, suggesting that the compound eyes of flies play a key role not only in flight, but also in mate recognition.

Researchers recorded wing movements of abdomen-mounted flies at 15,000 frames per second under direct light which revealed the wing flashes. They then went on to record flies in free flight, placing 50 young or old male flies or 50 young or old female flies in a wire mesh cage. They found the young females to have a wing-flash frequency of 178Hz, significantly lower than young males (212Hz), old females (235Hz) or old males (265Hz).

To test if these flashes contributed to mate recognition and if male flies are attracted to the visual wing-flash of young females, researchers mounted two live females with immobilized wings to aluminum T bars and illuminated each female with LEDs. One emitted light at the flash frequency of a free flying female whilst the other produced constant light. When these were placed in a cage containing 50 males, the males alighted towards the female with a flashing light significantly more times.

The sphere flashing at 178Hz received significantly more alighting responses from males than any other frequency.

This experiment was then repeated but with a live male fly illuminated by the flashing LED to eliminate the phenotypic effects of female flies. The male flies still alighted with the fly exposed to the pulsing light.

The researchers also ran the experiment with spheres containing LEDs replacing the female flies. This would isolate the light flash effects as a test variable. The sphere flashing at 178Hz received significantly more alighting responses from males than any other frequency.

Sunshine of your love

During the study, the researchers found that under diffuse light and when photographs of the flies were taken outside on a cloudy day, the light reflections on the wings were not evident. This finding fits with the low mating propensity of common green bottle flies on cloudy days where direct illumination from the sun becomes diffuse, reducing the wing-flash effect. This indicates that the sexual communication of these flies is synchronized with environmental conditions to optimize the communication signals.

The findings of this study demonstrate a previously unrecognized visual mate recognition system in common green bottle flies that suggests that the advanced visual systems of flies support both agile flying and mate recognition. It could well be that this form of mate recognition occurs in other insects, this could pave the way for potential applications such as optimized light traps to capture nuisance insects.

But for now, the next time you see flies buzzing about in the sunshine, before reaching for a fly swat, spare a thought, they may just be looking for love.