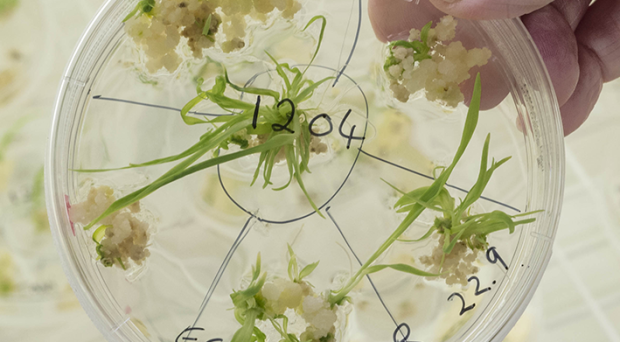 Dr Cristobal Uauy is a Project Leader at the Crop Genetics Department, John Innes Centre, Norwich, where he is working on wheat genetics and genomics. His lab uses molecular genetic approaches to identify genes for productivity traits in cereals.

Prof Lars Østergaard is Head of the Crops Genetics Department at John Innes Centre, Norwich. The group is developing genetic resources for Brassica research and is using both molecular genetics and functional genomics to study fruit growth.

Can you explain the challenges in genetically modifying crops?

Genetic modification (GM) of crops still faces a number of challenges despite GM crops being grown commercially for almost 20 years and GM crops now being grown by 18 million farmers. Some of these challenges are technical and some are due to unease regarding the technology among certain groups and in certain countries.

GM is just one technology that can contribute to crop improvement and it has been the most controversial, despite often resulting in crops which are similar in many ways to those produced by other conventional methods.

Maybe one reason for this controversy is the perceived lack of precision with the technique and concerns that the process may somehow result in an unanticipated outcome due to the inserted DNA. Despite vast amounts of analysis of GM plants such unanticipated outcomes have not been found.

Genome editing is a very precise process and the final plants produced using this technology may contain no inserted DNA. For these reasons genome editing may be favored by some in preference to traditional GM technologies.

Can you briefly explain how CRISPR/Cas system is used to genetically modify plants?

The CRISPR / Cas9 system for genome editing requires delivery of a nuclease to a specific target site in the genome where it introduces a break in the DNA. The break is then repaired by the cells repair machinery, often in an imprecise way, leading to the introduction of a small insertion or deletion in the target gene preventing its function.

The difference between CRISPR/Cas9 and other genome editing systems is that it requires only a guide RNA to target the nuclease to the gene of interest rather than a complex protein assembly.

In our study we delivered the components using Agrobacterium-mediated transformation. This is our preferred delivery method because it leads to introduction of single copies of the genes in 50% of cases.

The CRISPR /Cas9 system requires several components, the nuclease, the guide RNA, and usually a selectable marker to enable plants containing the components to be identified. These components can be delivered in a similar way to the introduction of genes in genetic modification.

In our study we delivered the components using Agrobacterium-mediated transformation. This is our preferred delivery method because it leads to introduction of single copies of the genes in 50% of cases.

The components of the system will usually be inserted into the plant DNA at a site remote from the target gene that is to be edited. It is this feature that allows all the components to be removed in subsequent generations.

Once all the components are present the actual editing can occur at any time from a very early stage before plant regeneration to later stages meaning that only some cells in the resulting plants may be edited.

What genes did you target in your study and why?

In our study we targeted genes of potential agronomic interest in both barley and Brassica. In barley the target gene (HvPM19) codes for a plasma membrane protein thought to be involved in the control of grain dormancy. Grain dormancy is particularly important in cereals because if germination occurs too early this results in pre-harvest sprouting that affects grain quality.

In Brassica, we targeted a gene (GA4) that in Arabidopsis affects plant architecture and pod shattering. The ease with which pods shatter affects seed dispersal and control of this trait is particularly important in Brassica crops.

In both examples, the target genes were chosen both as convenient genes to demonstrate that genome editing using CRISPR /Cas9 works in these crops, and as genes of particular scientific interest for understanding the genetic basis of important agronomic traits.

Was there a particular aspect of the study you found challenging? If so, how did you overcome this?

One of the most challenging aspects of the study was the detailed analysis of the edited plants to discover which different edited copies (alleles) of the target genes were present in the initial plants. The design of strategies to easily screen plants for the presence of edits is a crucial part of the genome editing process.

We approached this by building in the capacity to enrich samples for edited genes by using a restriction enzyme digest prior to PCR-based analysis. A further challenge was to then follow the different alleles through generations and determine when the initial editing events were likely to have happened.

What are the possible implications of your research?

Our research demonstrates that it is possible to use CRISPR /Cas9 based techniques to create precise changes in target genes in both barley and Brassica. Plants recovered in subsequent generations contained the edited gene but did not contain any inserted transgene.

This issue is currently being considered at EU level but a number of countries and competent authorities have already issued opinions that edited plants derived in this way should not be considered as GMOs.

Genome editing technologies have huge potential to contribute to the much needed development of improved crops as well as providing a valuable research tool to allow more rapid analysis of genes responsible for key agronomic traits.

The decision on whether such crops are regulated as GMOs in the EU will have an enormous impact, both on research in the EU as well as on the range of tools available to breeders to allow them to address pressing challenges in providing sufficient, safe food in a sustainable way.