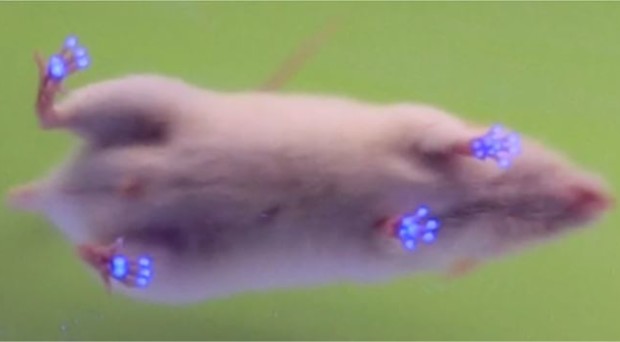 How does a mouse walk and how can this information be used?
Mendes et al, 2015

What led you to design MouseWalker?

Our initial tracking apparatus, which included an optical touch sensor and software package, was designed to quantitatively describe locomotion in the genetically amenable fruit fly Drosophila. Using this tool, which we called FlyWalker, we are currently studying the motor circuit that controls coordinated locomotion in this animal.

After publication of this method, we received several inquiries from researchers using rodents asking if the approach could be scaled up for their experiments. This encouraged us, together with our FlyWalker collaborators Imre Bartos, Turgay Akay and Szabolcs Márka, to redesign the optical touch sensor, and software, for it to be used in rodents to generate a large set of metrics and quantitative outputs.

We also realized that an optical touch sensor-based system could be used to extract many more quantitative parameters than are generally used by the community.

Can you briefly describe how MouseWalker works?

The hardware component of MouseWalker is based on an optical effect termed ‘frustrated total internal reflection’, or fTIR. This effect, first described by Isaac Newton, is based on the disruption (or frustration) of light that is internally reflected within a transparent material, such as glass or acrylic.

The internally reflected light is frustrated each time a paw contacts the surface of the acrylic glass. This approach can therefore be used as an optical touch sensor and, consequently, is used in fingerprint sensors and rain detectors in cars.

Using a high-speed video camera, we record the appearance of the footprint and body contours as the animal moves in real time.

Subsequently, computer tracking software tags each leg and multiple body features. The user can easily correct any errors using a graphical interface. From these data, the program generates a large set of static and dynamic parameters such as spatial patterns, step parameters, and inter-leg coordination.

Why is monitoring movement behaviors and disorders in rodents important for research?

Many basic or disease-model studies in vertebrate systems affect the locomotor system. It is thus critical to quantitatively describe the deleterious effects of experimental perturbations.

This is important, for example, to follow the progression of a neurodegenerative or aging condition and also to determine the effects of a candidate therapy.

How does your research build on previous work currently in the literature?

Most experimental setups that look at locomotion use indirect performance tests such as the rotarod test, which fail to provide detailed kinematic information. Although some commercially available equipment provides such information, these systems fail to measure many relevant parameters, and it is difficult to modify the hardware and software to a researcher’s particular needs.

These problems, together with the large cost of these systems, have discouraged the community from using this approach and therefore slowed research in this area.

How do you see this technology developing further in the future?

Because our optical touch sensor can be easily built with inexpensive components (which are described in detail in the paper) and our user friendly-software package is freely available, we hope researchers will take advance of this powerful tool to describe locomotion under a wide variety of experimental conditions.

We hope researchers will take advance of this powerful tool to describe locomotion under a wide variety of experimental conditions.

Since high-speed cameras are becoming more available at lower costs, the initial financial investment will be a fraction of other motor performance tests. Importantly, our studies of fly locomotion led us to generate additional metrics that can quantitatively reflect the motor performance in rodents and therefore facilitate quantitative and unambiguous comparisons between experimental conditions and systems.

We also expect that researchers will modify the initial design described in our paper. For example the frustrated total internal reflection arena can be redesigned in order to allow animals to walk in a larger area instead of along a narrow corridor.

In addition, although the current version of the program generates a large dataset, users can also change the provided software in order to generate outputs custom fit to their interests or to measure specific phenotypes that we did not anticipate.

Because of its simplicity, this method can also be combined with other approaches that allow a more global view of locomotion. For example, frustrated total internal reflection apparatus can be used in animals where each joint is tagged in order to generate whole-body kinematics.

Moving animals can be implanted with muscle electrodes in order to correlate muscle activity (via EMG recordings) with step patterns, and the system can be paired with optogenetics to visualize changes in gait upon activation of small numbers of neurons. MouseWalker can also be readily modified to study other animals, from lemurs to humans.