The conference covered epigenetic diagnostics, aetiology, therapies, and prevention in the context of human disease. There was an impressive program of international speakers with talks on a broad range of topics, including cancer, epigenetic editing, neuropsychiatry, rare disorders, and exercise.

The level of the talks was aimed at both clinicians and translational researchers, with molecular research, epigenetic data, clinical descriptions, and clinical data presented. It was exciting to see epigenetic principles applied to so many medical disciplines. 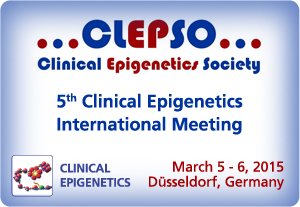 The potential reversibility of epigenetics to treat disease is a thrilling prospect, and one that is attracting many scientists to the field of clinical epigenetics.

The research of Marianne Rots, Associate Editor and Reviews Editor for Clinical Epigenetics, is paving the way in this area with epigenetic editing, and was discussed in her talk at the meeting.

Fibrosis-related diseases can be linked to half of all deaths, and DNA methylation can offer protection from fibrosis. For this reason, the Rots lab are looking into epigenetic editing as an innovative anti-fibrosis approach. The goal of this tool is to introduce epigenetic changes to override gene expression

The Rots lab use zinc-finger proteins (ZFPs) to do this, in addition to re-purposing the popular CRISPR-Cas approach. Although ZFPs are harder to produce than CRISPRs, Rots explained that they have been around for two decades and have passed clinical trials – hence they are a tried and tested technique that can be easily learned.

This work links in with a review in Breast Cancer Research from Rots and colleagues looks at the applications of epigenetic editing in breast cancer. It’s also related to an overview on synthetic epigenetic genome targeting technologies which was published last week in a Clinical Epigenetics ongoing series, edited by Marianne Rots.

Thomas Eggerman (European Network of Human Congenital Imprinting Disorders, Germany) talked about imprinting disorders (IDs), a group of rare syndromes caused by defects in gene expression due to silenced genes inherited in a parent-of-origin manner. There are eight currently known IDs, including Silver Russell syndrome and Beckwith-Wiedemann syndrome. Potential causes include deletions affecting the imprinted region, and mutation of genes involved in establishment of DNA methylation.

With the field of clinical epigenetics being most advanced in oncology, it was not surprising that cancer was the main topic of discussion at the meeting. The role of DNA methylation in cancer has been a controversial topic of discussion for many years now, with differences in opinion on whether it is a cause or consequence.

Zdenko Herceg of the International Agency for Research on Cancer gave an interesting talk on epigenome deregulation in cancer, showing that epigenetic regulators are frequently mutated in malignancies and hence this is relatively solid evidence of methylation not being a side effect.

Several talks were looking at microRNA profiles in cancer, including Eckart Meese from Saarland University in Germany, who discussed the potentials and limitations of miRNAomes in the cancer context. He evaluated that different cancers show specific miRNAomes, however these may only be valuable data with one time point rather than long term.

It was great to hear examples of novel epigenetic applications happening in medicine now. A talk by Renske Steenbergen discussed a cervical cancer home test that is now offered to Dutch women who do not attend smear tests. This detects for four DNA methylation biomarkers, and has helped to diagnose many women with cervical cancer.

In addition, Nita Ahuja (Johns Hopkins, USA) presented her lab’s work on epigenetic diagnostics and therapies for gastrointestinal cancer. They have shown methylation of stool DNA to be a potential biomarker for colon cancer, and CpG island methylator phenotype (CIMP) to be a biomarker in colorectal cancer. Their end goal is to reverse DNA methylation in gastrointestinal cancer, currently using DNA methyltransferase inhibitors, which take four months to reduce malignancy.

It’s important that this research is done because we already know that epigenetics affect mood disorders from existing studies. However more reviews than research are published on this topic, implying that interest is greater than the amount of existing data. In addition, the field is generally limited to post-mortem studies (occasionally peripheral tissues can be used to show psychiatric epigenetic biomarkers).

The topic of reported DNA methylation reproducibility came up in discussion during the meeting. Worryingly, it has previously been shown that less than 10% of DNA methylation reported in studies is reproducible. This could seriously devalue some existing published research, and certainly puts a question mark over some assumptions.

An article recently published in Clinical Epigenetics suggested that non-quantitative technologies for assessing DNA methylation do not produce accurate enough results and hence may lead to misreported methylation in some studies. The authors also wrote a guest blog discussing how to make sense of methylation data.

Fortunately, improved techniques (mainly the 450K methylation array) provide the advantage of increased sensitivity over previous techniques. Replication studies also play an important role in supporting DNA methylation findings. Together, this means that results are becoming more reproducible, and has the potential to really advance fields such as psychiatric epigenetics where the data we have are relatively sparse compared to that of cancer research.

Next year’s meeting will take place on 2-4th March 2016. Keep an eye on the Clinical Epigenetics website for further updates, or you can sign up to receive the journal newsletter. You can also follow the Epigenetics & Chromatin and BioMed Central genetics twitter accounts for related updates.