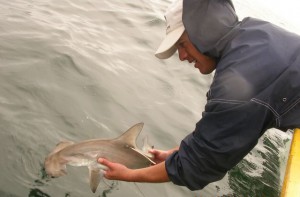 Hammerhead sharks, which recently received new protections from the UN Convention on the Conservation of Migratory Species of Wild Animals, have suffered drastic population declines in excess of 90% in some parts of the world.

In the Gulf of California, Mexico particularly, scalloped hammerheads are susceptible to being caught by fishing nets while moving into the open sea. However, little information exists on their exact movements, especially those of juvenile sharks as they go through their critical period of adolescence.

New research published in Animal Biotelemetry has now for the first time tracked the precise movements of a young hammerhead shark over a 10-month period, revealing important gaps in current efforts to protect this endangered species. The study is the first of a new article type called ‘Telemetry Case Reports’ which aim to highlight small but important pilot studies.

Researchers from the Centro Interdisciplinario de Ciencias Marinas, Mexico and the University of California, Davis, USA travelled out into the Gulf of California by boat and collected a female juvenile hammerhead measuring 95 cm. At the base of her pelvic fin they inserted a small electronic tracking device, able to calculate position and depth, and then released her back into the water.

The shark, which grew to 123 cm, was recaptured 10 months later by local fisherman after they identified the visible tag and reward notice during fishing. After the tracking device was removed and the shark released, the downloaded data revealed a wealth of information about her 3,350 km journey.

Co-author Peter Klimley, Director of the Biotelemetry Laboratory at the University of California, Davis, says that while this study has a very limited sample size, this new type of case report demonstrates the potential for sophisticated electronic tags to confirm a theory by observing sharks in their native environment.

He tells BioMed Central: “In the mid 1980s, I argued that female hammerheads invested more energy in giving birth, with the female devoting a third of her body mass to the gestation of her litter of pups. This explained why young female hammerhead sharks were found in large schools at offshore seamounts and islands, where they could feed readily on the plentiful supply of fishes and squids. The males stayed inshore, well away from the predators that lurked in the deep waters.”

But the detail of these exact movements have not been seen in such depth before the current study. After the researchers initially investigated the data from the tag and saw that halfway through the year, the young female hammerhead had indeed moved offshore, Klimley suggested probing the data further, and looking at the fine detail of her movements over a 24-hour period.

Under closer scrutiny, the researchers saw that the young female hammerhead would often swim within a school of fellow hammerheads at an offshore island during the day, but migrated away at night, diving to greater depths to feed on fish and squid, sometimes as deep as 270m.

By completing her biological cycle in both coastal and offshore areas of the central and southwestern Gulf of California, the research suggests that juvenile female hammerheads are trading off the risks of greater exposure to predators in the open sea, in exchange for the opportunity to get offshore as early as possible and grow big quickly. By doing this they can jockey for position, assert dominance in the schools, establish social rank and increase their reproductive potential.

These new insights suggest that current management measures for sharks set by the Mexican government may unfortunately be insufficient for the conservation of the species. Currently, commercial fishing from large vessels within 50 nautical miles from the coast is prohibited and may result in some protection.

However, the researchers say that this new information highlights that hammerhead sharks may still be in danger, due to their use of both coastal and offshore waters during early life stages. A greater focus may therefore need to be placed on protecting and locating marine reserves in offshore refuging areas as well as coastal nursery grounds.

How many hammerheads do you tag each day

Joel is Media Officer at BioMed Central. Previously, he worked in communications at the London School of Hygiene & Tropical Medicine and the UK Government, and has science TV and journalism experience from the BBC, SciDev.Net, Wired and New Scientist. He studied Biochemistry at the University of Bristol, followed by a Masters in Science Communication at Imperial College London.