In February 1541, Spanish conquistador Francisco de Orellana led a force from modern-day Ecuador into the South American interior to discover the fabled land of cinnamon. Constantly threatened by the native Omaguas tribe, they reached the Rio Negro and became the first Europeans to witness the mighty Amazon. Over 450 years later, scientists are still adding to our understanding of the world’s greatest rain forest, the most ecologically rich region on the planet, including the discovery of a new giant virus in the Rio Negro.

Home to one in ten known species in the world, the Amazon is a rich region for discovering new life. Along with the many species of insects, mammals and birds, a recent expedition identified a new giant virus that infects Acanthamoeba living in the black waters of the Rio Negro, described today in Virology Journal.

Acanthamoeba are a type of amoeba – a single-celled protozoa that feeds on bacteria by engulfing them through a process of phagocytosis. Acanthamoeba are commonly found in soil and water samples and occasionally cause opportunistic infections in humans.

This new giant virus, given the wonderfully Brazilian name of Samba, infects and kills the Acanthamoeba. More interesting still was an associated virophage, another virus that also grew in the Acanthamoeba, but within the Samba virus factory. The virophage, named Rio Negro after Orellana’s river, is a parasite of Samba virus, reducing its growth, thereby partially protecting the acanthamoeba. This matryoshka doll of microbes offers a fascinating glimpse into the unseen microbial ecology of the Amazon region. (The diagram [not to scale] below shows you more..) 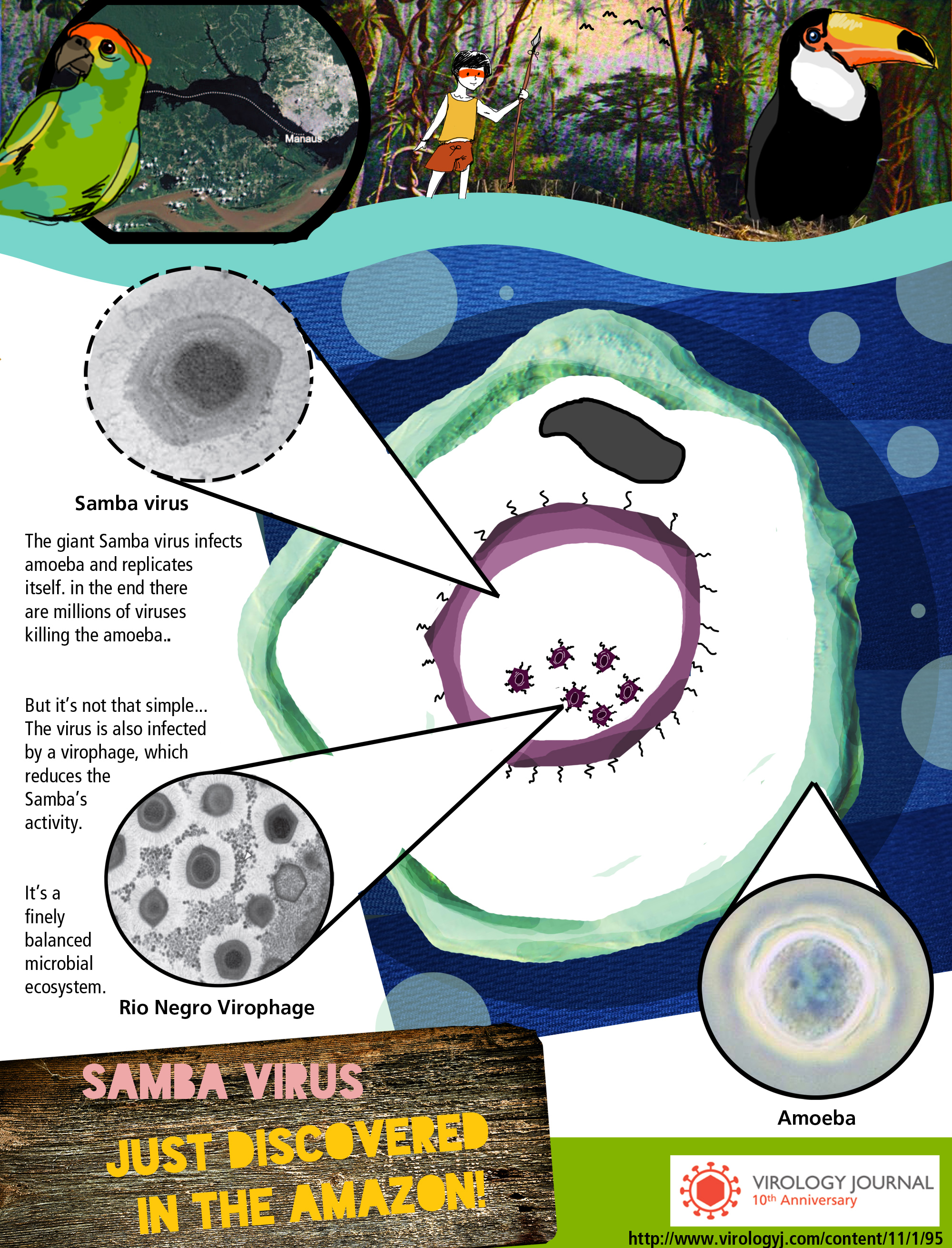 When the first giant virus, Mimivirus, was discovered in water from a cooling tower in England, it stunned the world with its 1.2 megabase genome – the largest virus genome by some stretch – bigger even than some bacterial genomes. Giant viruses were subsequently isolated from various environmental water sources, including off the coast of Chile and a pond in Melbourne, as well as from soil, 30,000 year old permafrost and a patient with pneumonia. Their huge genomes contain many genes never before seen in viruses, including some involved in protein translation and DNA repair.

The discovery of Samba virus and its associated virophage from the Amazon is important. Conservationists and the public alike tend to focus on the animal and plant life that thrive in the wet forests of the Amazon. But none would survive without the microbial life there – the nitrogen, phosphorus and carbon cycles all depend on microorganisms.

Viruses are important predators in controlling microbial populations, especially in rivers and seas. When Samba virus infects acanthamoeba in the Rio Negro, they produce many more million Samba viruses, causing the acanthamoeba to burst, releasing its nutrient-rich contents into the black water, as shown in the strip below.

The exact role of giant viruses in the Amazonian ecology is unclear and deserves further investigation by the Brazilian and French teams that discovered them. Many species in the Amazon are under threat, but when campaigning for the conservation of the jaguar, the poison dart frog or the Amazonian manatee, spare a thought for the microbes. These unseen creatures – the acanthamoeba, the plastic-eating fungus Pestalotiopsis microspora and the giant Samba virus form a crucial, yet poorly understood, part of this vibrant and iconic Amazonian ecosystem.

Associate Publisher at BioMed Central
Dr Ben Johnson is Head of Communities & Engagement at Springer Nature. He runs all online community blogs, including the Nature Research and Springer Nature communities and the BMC blogs. He has a PhD in influenza virus from the University of Reading and Public Health England and was a postdoc at Imperial College London before entering publishing as an Acquisitions Editor and then Associate Publisher at BMC, where he launched new open access journals. He is based in our London office.