Recent headlines reporting contaminated floodwaters invading British towns and villages may have left you wondering what’s really lurking in these waters. If the floodwater is contaminated, as has been suggested, with bacteria such as E. coli, campylobacteria (a common cause of food poisoning) and norovirus in Surrey and the Somerset levels, what other microscopic entities could be being transported around the country by the extraordinarily high water levels?

One microscopic organism which is almost certainly present in the floodwater, but less of a threat to our health, is the water flea – the subject of a new paper published in EvoDevo this week. Water fleas are in fact not fleas at all, bearing little resemblance to their distant arthropod cousins, which were blamed for the devastating spread of the black death in the 14th Century. They’re actually planktonic crustaceans, and those of the genus Daphnia are one of the oldest model organisms in biological research. Their uses are wide-ranging from ecotoxicology to ecology and evolutionary biology. 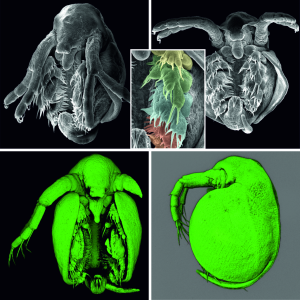 Water fleas, which inhabit freshwater ponds, lakes and rivers, are filter feeders, and so play a key role in freshwater ecology by consuming algae and therefore facilitating nutrient cycling in the water. The commonly observed natural flux of algae in many freshwater ecosystems can be correlated with the rise and crash of Daphnia populations as they consume and deplete their algal food source. Daphnia are in turn consumed by a number of larger aquatic predators – they are a commonly-used commercial fish food – and therefore constitute an important component of many freshwater ecosystems.

Finding Daphnia swimming happily in the floodwater would actually be a very good sign, as Daphnia can be used to detect toxic levels of chemicals in water, in a similar way to the use of canaries in coal mines. In a common classroom experiment, the proportion of Daphnia that stop swimming in a sample being tested correlate to toxicity levels in the water; this test is thought to be more sensitive to water quality than any conventional chemical analysis.

As if that wasn’t enough, these tiny organisms are also important models for evolutionary biology, as they have relatively short generation times, and are easy to breed. In particular, their interesting reproductive cycles – many Daphnia species have the ability to reproduce asexually through parthenogenesis, or sexually, depending on environmental conditions – make them ideal models for investigating the evolution of sexual reproduction.

Daphnia magna, one of the many closely related species of water flea, is cultivated without difficulty and allows easy accessibility to the developing eggs, making it an attractive model for evodevo research. Published this week in EvoDevo, Mittmann et al describe an important new staging model for this species. 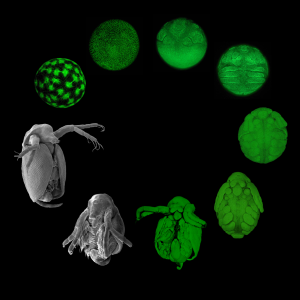 Previously published staging systems use time as a measure of development. However, many common techniques and methods in developmental biology cause delays in development,  and therefore make these models inaccurate and can invalidate these experiments. Instead, Mittmann et al rely on morphological characteristics to identify developmental stages of developing Daphnia. For more information, please also see a recent Q&A with the senior author Carsten Wolff.

This new model can be used to accurately identify developmental stage independently of timing and is therefore of high importance to researchers looking at the evolutionary and developmental biology of these arthropods.

With the numerous experimental uses for water fleas, this model will have wide ranging implications across the research community. Researchers can look forward to reading the further developments made and insights gained from using this model to study this important model organism.

So not everything lurking in those floodwaters is to be feared – despite being one of the oldest model organisms in biological research, the humble water flea is still proving its use.