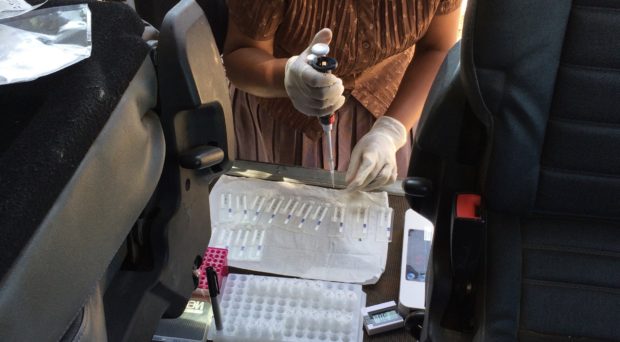 This blog post is part of a series featuring the new articles published in the LCNTDR Collection: Advances in scientific research for NTD control, led by the London Centre for Neglected Tropical Disease Research (LCNTDR). Stay tuned for the next blog posts on Twitter @bugbittentweets and @NTDResearch.

Significant progress has been made to eliminate trachoma, the world’s leading infectious cause of blindness, as a public health problem. In July 2020, the World Health Organization (WHO) reported a 91% reduction in number of people at risk of trachoma, from 1.5 billion in 2002 to 136.9 million in May 2020. Moreover, in 2019 it is estimated that 152 districts worldwide reached the active elimination threshold, resulting in 21.8 million people no longer requiring treatment.

As countries accelerate towards elimination, national trachoma programmes are increasingly conducting surveys to generate evidence to validate elimination as a public health problem in formerly endemic regions. However, as many national trachoma programmes are finding, this is often complicated by poor correlation between disease signs and infection, particularly after mass antibiotic administration to stop the spread of Chlamydia trachomatis (the species of bacteria responsible for blinding trachoma). Clinical signs (‘symptoms’ are reported by patients, ‘clinical signs’ are assessed by clinicians) can persist long-term in the absence of active infection and can lead to uncertainty about the impact of programmes. Using clinical signs to asses infection can result in unnecessary distribution of mass antibiotic treatment and risks an increased spread of antibiotic resistance in ‘off-target’ bacterial species. Diagnostic tests that can detect ocular infections are needed to provide a more accurate picture of infection prevalence and inform treatment programmes.

To support national programmes to generate evidence, researchers from the London School of Hygiene & Tropical Medicine, in collaboration with the Fraunhofer Institute (Germany) and Kilimanjaro Christian Medical Centre (Tanzania) evaluated a simple, fast, and low-cost diagnostic assay (DjinniChip) for the detection of ocular C. trachomatis. The diagnostic device, which was developed by the team at the Fraunhofer Institute and detects C. trachomatis nucleic acid through an isothermal (even temperature) amplification reaction, is unique in its lack of requirement for specialised instruments and mains electricity power supply. The device is stable in storage at ambient temperature (23°C), can be used by lay personnel and requires only a portable heat block, able to be powered by 12V car battery, meaning that it is mobile or can be used in local health posts and district-level laboratories in resource-poor settings.

After the initial development and testing of the DjinniChip at the Fraunhofer Institute, in the first quarter of 2019 the team set out to evaluate the performance of the DjinniChip in a trachoma-endemic district of Tanzania. In the first phase, 352 archived clinical ocular samples were tested in parallel by the DjinniChip and a reference test in a research laboratory in Kilimanjaro district. The swab samples were previously collected from children from a nearby trachoma-endemic area. The DjinniChip was found to have promising sensitivity (66%) and specificity (94.3%), with an overall accuracy of 90.1%. The main issue limiting sensitivity was inhibition of the DjinniChip reaction in some clinical samples, which can be caused by cellular debris remaining from the lysis step.

In the second phase of the study, mock samples were prepared with a range of C. trachomatis concentrations in order to test the durability of the DjinniChip under field conditions. Mock samples were tested on the floor space of a 4×4 vehicle in typical environmental conditions where trachoma is found (hot, humid, dry and/or dusty). There was minimal impact of the challenging environmental conditions on the test’s ability to detect C. trachomatis; 62/64 positive mock samples were correctly identified. The primary issue was the high rate of false positives in the negative mock samples (10/16), which was found to be due to cross-contamination during field testing.

Ocular infection testing, such as DjinniChip, is not currently recommended by the WHO as an indicator for national trachoma programmes. However, there is an urgent need for low-cost, simple to use tests for C. trachomatis to guide district-level treatment decisions, particularly around whether MDA can be discontinued.

DjinniChip has shown promising potential to meet these criteria. The next iteration of the DjinniChip is currently in development and will transform the test into a fully closed pipette-free integrated format with minimal handling of liquids. This will minimise the risk of cross contamination and further increase its useability by lay personnel. Optimisation of the lysis step and sample dilution will also be explored to prevent sample inhibition. With this further development, the DjinniChip could support national trachoma programmes to generate evidence more effectively and could be used alongside serology tests to aid in their interpretation. Ultimately this could contribute to the optimal use of resources and the elimination of trachoma as a public health problem by 2030.

Tamsyn trained as an immunologist in the Clinical Research Department at the London School of Hygiene & Tropical Medicine (LSHTM). After completing an undergraduate degree in Biology at the University of Bristol in 2010, she studied for a Masters in Immunology of Infectious Diseases at LSHTM. Following this Tamsyn joined the trachoma group at LSHTM to investigate immunofibrogenic host responses to ocular Chlamydia trachomatis infection, completing her PhD in 2016. She then spent four years as a post-doctoral research fellow based at the Kilimanjaro Christian Medical Centre in Moshi, Tanzania, researching the epidemiology, immunology and control of infectious eye diseases. In 2019, Tamsyn left LSHTM and she now works for the Medical Research Council.

Martin’s research interest focuses on understanding how immune responses in trachoma lead to conjunctival fibrosis, the characterisation of immune responses to potential C. trachomatis vaccine candidates and trachoma control strategies. His research applies genomic scale studies to trachoma examining the host conjunctival transcriptome by microarray, RNAseq and high through put quantitative RTPCR. We have also studied the ocular microbiome using 16S-amplicon sequencing, the global anti-Ct antibody repertoire, and host genetic susceptibility by GWAS and candidate gene association studies. A key interest is pathogen virulence and clinical severity. More recently his research has focused on evidence of the impact of azithromycin on population antibiotic resistance in C. trachomatis, other off target bacterial species and the effect on the ocular and gut microbiomes following implementation of SAFE.
Martin was previously based at the Medical Research Council Unit in The Gambia and worked on the Bill and Melinda Gates Foundation funded Partnership for the Rapid Elimination of Trachoma (PRET) and Wellcome Trust funded studies on the correlates and immunopathogenesis of trachoma. Our current work in trachoma control, immunology and diagnostics continues through collaborations with the MRC Unit in The Gambia, London School of Hygiene & Tropical Medicine and with members of London School of Hygiene & Tropical Medicine staff and country partners in Guinea-Bissau, Tanzania, Malawi and Ethiopia.