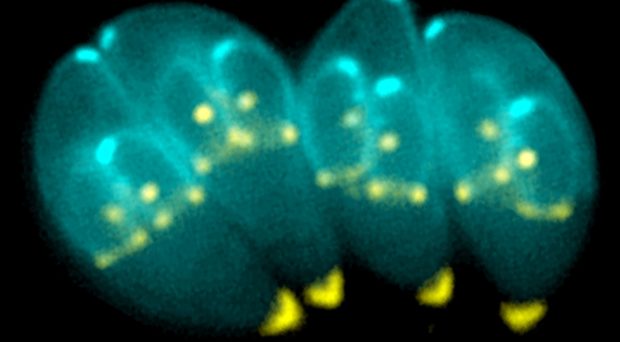 Toxoplasma gondii is a single-celled parasite that can infect and reproduce asexually in the cells of almost all mammals, including humans. Sexual reproduction only occurs in felids such as the domestic cat. It is prevalent worldwide and it is estimated that over a quarter of the world’s population is infected with Toxoplasma.

In intermediate hosts, the invasive stages of Toxoplasma’s life cycle are called tachyzoites. They can infect any cells in the body, multiply, then lyse the cell (see a previous BugBitten blog) and spread further; until the immune system catches up with them. A few of these tachyzoites differentiate into slowly dividing bradyzoites, particularly in cells of the brain, eye and muscles.

Enclosed in a cyst wall, these bradyzoites can persist for the lifetime of the host and cannot be eliminated by the immune system.

Their presence in rats causes behavioural changes making them more susceptible to predation and in humans, infection has been associated with behavioural and personality changes, aggression and entrepreneurial behaviour,  although there is little evidence that infection is linked to severe psychiatric disorders.

The cyst wall surrounding the parasites is formed from an infolding of the host cell membrane.

That surrounding bradyzoites, is less permeable than the wall enclosing tachyzoites and is a heavily glycosylated structure  with many stage-specific proteins of unknown function inserted in it. In addition, unlike tachyzoites, bradyzoites undergo anaerobic respiration and their metabolism is slower. Bradyzoite formation leads to a latent infection that lasts a lifetime and can result in recrudescence that can be life threatening in immunocompromised individuals.

The presence of this dormant stage greatly enhances transmission of the parasite (if tissues containing bradyzoites are eaten) thus making an understanding of the formation of this stage important.

Differentiation of tachyzoites into bradyzoites can be induced in vitro by a variety of stressors, and differences in the regulation of a large number of genes have been recognised. However, the differentiation process is poorly understood.

Members of the Sebastian Lourido lab at the Whitehead Institute and MIT have developed a pooled genetic screen using CRISPR mediated disruption of Toxoplasma genes. This has enabled them to identify and investigate fitness conferring genes. Their technique is elegantly explained by Sebastian Lourido in two videos available from his profile.

In a recently published paper his group report that they used this protocol to look for mutant Toxoplasma, deficient in differentiation. To do this they produced a reporter strain that expresses a fluorescent marker when bradyzoites were formed; Cas9 allowed efficient gene inactivation.

After stressing their cell cultures, and using a cell sorter to separate bradyzoites from tachyzoites, they found 1,311 genes were upregulated and 933 genes were downregulated in bradyzoites. Two gene libraries were constructed and screened for genes required for bradyzoite formation.

The caspase-mediated screening allowed them to identify a single gene as essential for differentiation. They named it Bradyzoite-Formation Deficient 1 (BFD1) and found it to be conserved among cyst-forming protozoan parasites in the subclass Coccidia. Knockout of this gene resulted in tachyzoites that grew normally in culture, but did not differentiate into bradyzoites when cultures were stressed. When mice were infected with ΔBFD1 parasites, no bradyzoite cysts were formed in the brain.

This paper, published in January in Cell, is a model exposition of the methodology used and the thinking behind the discovery of this key to understanding how a transmission stage of such a common parasite is formed. The authors point out the biotechnological potential for ΔBFD1, and for ΔBDT1 parasites as an attenuated vaccine strain. Let us hope this bears fruit.