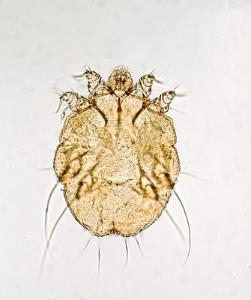 Mites are small arthropods, closely related to spiders. While not all mites are parasitic, and many parasitize plants, some mites do cause problems for mammals. The most important of these are scabies mites, such Sarcoptes scabiei, belonging to the Sarcoptidae family. These mites crawl on and within the skin of mammals, and create burrows to lay their eggs in. Their activity causes an intense allergic reaction, leading to itching. Scratching this itch may then lead to secondary bacterial infection, such as impetigo or eczema. Humans, as other mammals, can be infected with a human-specific subspecies of mites, leading to the disease called scabies. This disease was in fact the first that was discovered to have a known microscopic causative agent in 1687, when Giovanni Cosimo Bonomo and Giacinto Cestoni saw the mites crawling on skin samples of patients with itching problems in the microscope.

There is a substantial amount of information available on the human immune response to scabies mites, as well as about the impact of secondary bacterial infections as a complication of scabies. However, information is steadily accumulating about how infestations by these mites impact the mammalian skin microbiome, facilitating secondary infections. The microbiome is the community of microorganisms (such as bacteria, archaea, fungi as well as viruses) inhabiting a skin, with many of those protecting the host from pathogens through either physically excluding them or actively producing antibiotics against them. If the mites can disrupt the microbiome, that could jeopardize this protection, helping opportunistic pathogens.

Alexandra DeCandia and her colleagues at Princeton have recently published a paper in Parasites & Vectors supporting this hypothesis in three canid species. Canids, such as dogs, coyotes, foxes and wolfes, can also be infected by their own Sarcoptes scabiei mites, leading to a disease with similar symptoms to scabies called “mange”. The term “mangy” refers to poor or shabby conditions, which is exactly how animals infected by these sarcoptic mites look – losing hair on large parts of their body and developing crusting infected wounds, sometimes with millions of mites crawling in them. These animals can look so scary that they inspired the legend of chupacabra, depicted as a hairless wild dog with a pronounced spinal ridge.

DeCandia and her colleagues collaborated with staff at Wildlife Clinics and Centers, who collected swab samples from 5 different body sites of canid wildlife admitted to their facility for them, taken before any treatments. They then extracted microbial DNA and amplified and tagged the 16S ribosomal RNA, and sent their samples to the Princeton Genomics Core Facility for Illumina sequencing. They identified operational taxonomic units from the resulting raw sequence data, which they then used for their microbiome analysis. They assigned taxonomy to all of their sequences by cross-referencing them with a reference sequence dataset. They then used QIIME 2 to calculate alpha and beta diversity metrics, relating to species richness and species composition, respectively. They visualized dissimilarity between samples using principal coordinate analysis and tested for significant differences using Kruskal-Wallis tests for alpha diversity and PERMANOVA for beta diversity. Finally, they used two new methods (at least for me), analysis of composition of microbes (ANCOM) and gneiss balances to test the statistical significance of compositional differences.

The final dataset they used contained 12 coyotes (8 mange-infected), 11 red foxes (6 mange-infected) and 2 grey foxes (1 mange-infected). First, they realized that samples taken from different body sites of the same individual were very similar in terms of microbiome compositions and therefore used composite samples at the individual level. Using these composite samples, they found that mange infection was the most important factor defining the microbiome of these animals, while the microbiome was not significantly different between different species (see picture on the right, Figure 3c from the paper). There was a disproportionate number of males among the infested animals, which made sex confounded with mange infection status, but the microbiome of uninfected animals was the same between the two sexes. They also found reduced species richness and evenness in mange-infected animals. Mange-infected canids had higher relative abundance of Actinobacteria and Bacilli relative to other bacterial species. The analysis of composition method identified the Actinobacteria as Corynebacterium spp., and the Bacilli as Staphylococcus pseudointermedius, an opportunistic pathogen in dogs and cats.

What does this mean? First, the changes in the microbiome of mange-infected canids described in this paper can be characterized as dysbiosis, defined as a microbial imbalance, maladaptation and impairment. While it is unclear if this mange-infestation induced dysbiosis is a symptom or a cause of secondary bacterial infections, this paper certainly provides evidence for an association. Interestingly, while the microbial composition was different by infection status, it did not differ between the species studied. The authors argue that mange infection has such a dramatic effect on microbial composition that it completely blurs the smaller differences in the microbial composition between different species, making it hard to detect with such small samples. The changes in the microbiome they found are consistent with other studies in humans, pigs and island foxes. In particular, Staphylococcus ssp. seems to be a common opportunistic pathogen associated with such dysbiosis and secondary infections. Mites can further facilitate these infections by secreting proteins that inhibit the mammalian complement system. Corynebacterium has been previously isolated from pigs with severe mange, but also from the gastrointestinal tracts of triatoms and ticks, suggesting it may derive from the mites themselves.

How is all this useful for us? Better understanding how mites can modify the microbiome of mammals (including ourselves) might help us develop better ways to avoid secondary infections related to them. Current treatments for mange and scabies based on acaricides is difficult, potentially harmful and uncertain. Drug resistance has already been observed in mites and their associated bacteria. Preventive antibiotic therapy, perhaps followed by administering beneficial bacteria as pro-biotic could protect against or even reverse this mange-associated dysbiosis. Hopefully, this would result in avoiding secondary infections and their complications, saving people and animals from their health consequences.