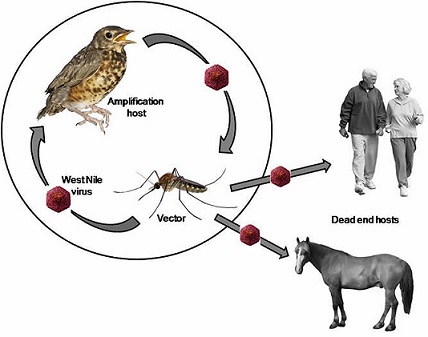 In 2015, I gave a presentation at the Society for Vector Ecology, lamenting the difficulties of predicting West Nile virus transmission risk at fine spatial and temporal scale. Up to now, there is no widely used and commonly accepted method to predict transmission risk of this most prevalent arbovirus in North America, with probably the best being the Vector Index used in the State of California.

One of the many difficulties of predicting West Nile virus is due to the complexity of its ecology, in particular the variety of bird species that can act as hosts for this virus. These, mostly passerine songbirds, differ in the probability that a susceptible mosquito would get infected if it fed on them. This heterogeneity arises from differences in viral titer and survival (together called host competence), environmental variables, and their abundance and attractiveness to mosquitoes. Most previous models of West Nile virus infection did not include this heterogeneity, and focused only on one or a small number of bird species. Overcoming this complexity seemed intractable, especially given that the data needed is only available for a handful of species.

Now, in a recent study, published in Parasites & Vectors, Morgan P. Kain and Ben Bolker at McMaster University, have demonstrated that this complexity can be incorporated into mechanistic models of WNV transmission in order to predict WNV spread, characterized by the basic reproduction number (R0).

They obtained county-level bird abundance data, using checklists from eBird, the citizen science platform run by the Cornell Laboratory of Ornithology, corrected for reporting bias. The titer profile, which describes how the West Nile virus titer changes over time since infection, and the survival rate per day of all the bird species is used to estimate the expected number of new mosquitoes infected by that bird species. This is then multiplied by the expected number of birds of each species that would become infected by a single infected mosquito. For bird species that do not have such titer profile and survival data available, the authors use phylogenetic imputation to obtain reasonable estimates. This method uses the phylogenetic relationship between species that we do have data for, in order to build a statistical model explaining how these traits vary across the phylogenetic tree. This model is then used to predict the titer profile and survival for the bird species that we don’t have empirical data for, based on their phylogenetic relationship to other birds, allowing for random error. There are many technical details in the paper, but to the credit of the authors, they did everything they could to thoroughly explain their methodology.

The authors used Texas as their test location due to the availability of large amounts of citizen science collected bird abundance data, as well as the large numbers of human WNV cases in the state. They predict reasonable estimates for the basic reproduction number of West Nile virus, in accordance with other studies. Predicted WNV transmission was highest in the Spring and late Summer, and lowest in the middle of Summer and during the Winter. These differences in this model are not driven by the observed seasonal differences in mosquito abundance, but are based on the non-linear temperature-dependence of viral titer in the mosquito salivary glands. There seemed to be a negative, but non-significant relationship between human population density and basic reproduction number, possibly due to altered bird community in more densely populated areas. Different ecoregions of Texas varied in their WNV transmission risk, due to different bird communities inhabiting those ecoregions.

One important contribution of this paper is the thorough attention paid to propagating uncertainty across many different sources, which is often ignored. As the authors emphasize, ignoring uncertainty doesn’t just make it look like we’re more certain in the predicted outcomes than we actually are, it can also contribute to biased estimates through a phenomenon called Jensen’s inequality.

While I am amazed by this paper, the authors make the limitations of their work very clear. One clear issue is that the mechanistic model assumes a single mosquito species, and a constant ratio of birds to mosquitoes. The authors advocate for extending their work by incorporating mosquito abundance.

The authors identified several species as important sinks as well as sources of infection, either diluting (e.g. mourning dove) or amplifying (e.g. northern cardinals) transmission. One curious result was that American Robins, which are considered an important reservoir host of West Nile virus, was not listed as an important contributor to West Nile virus transmission. However, the authors highlighted that bird communities in Texas are different from those in which American Robins were found to be important.

Kain and Bolker offer their manuscript as a first step towards developing better models for predicting West Nile virus transmission. Their paper is accompanied by a repository on Github that contains all code required to run the model and analysis, which is well documented. The model can be applied to other jurisdictions, both within the United States as well as in Europe, where ample data is available in Germany and Italy.

Predicting West Nile virus transmission has been a personal mission of mine, particularly in my own community in Eastern Washington. Last summer, I collected Culex mosquitoes that were positive for WNV. In contrast, this summer I did not detect the virus. Climatically, this summer has been much colder and wetter than last summer, which was characterized by record heat and drought. It would be very interesting to see how supportive the local bird community is for WNV transmission, according to the model by Kain and Bolker. I checked on eBird, and plenty of checklists exist for birds in Spokane County, providing ample data for analysis. My intention is to try and apply their model to our locality, and see how well it extrapolates. In general, I am amazed by the thorough and ingenious work they have done to make such a complicated system so much more tractable by focusing on the bird communities. This development gives me hope that, with the incorporation of mosquito dynamics, we will finally have a system that can provide realistic predictions of West Nile virus transmission risk, and contribute to protecting the public from this most prevalent arbovirus.