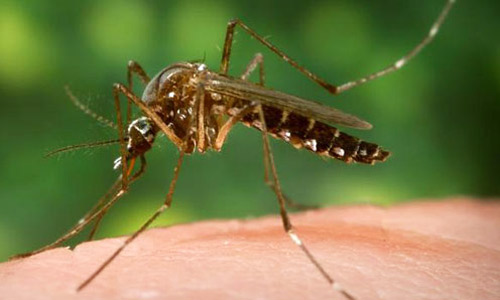 The yellow fever mosquito, Aedes aegypti, so called because of its role in transmitting this disease, is also a vector for diseases such as dengue fever and Zika. Its preference for feeding on humans, enhances the spread of the causative viruses. Females  are attracted to a complex mixture of odors emanating from humans, including carbon dioxide and the carboxylic acid, lactic acid; key components of human breath and sweat respectively. They are detected by sensory organs on the antennae, maxillary palps and proboscis. These organs are located on microscopic hairs (sensilla) that are perforated, allowing volatile molecules to enter. The molecules are picked up by odorant-binding proteins and transported to receptors, which convert the chemical signal to an electrical one that is conveyed along neurones to the brain.

Three types of receptors are known to be present in the antennae of the yellow fever mosquito, gustatory receptors (GRs), that are sensitive to carbon dioxide, and two families of receptors, ionotrophic receptors (IRs) and odorant receptors (ORs) that are responsive to a range of molecules. There is little overlap between the molecules detected by these two families. Carbon dioxide appears to act synergistically with at least some of these receptors.

Co-receptors are required to form a functional unit with IRs and ORs, making an odor-responsive ion channel. If these co-receptors are disrupted, the ability to detect their respective stimulant will be impaired.

In an attempt to discover the odor receptors responsible for detecting the presence of humans, researchers ablated the gene for the obligate OR co-receptor called Orco. Response to odor was greatly reduced in these mutants, however, if CO2 was present, response was restored, but preference for humans no longer occurred. The OR pathway is thus modulated by CO2 and is crucial for the detection of humans.

Other work showed that mutants lacking Gr3, a part of the GR receptor, did not respond to CO2 and their response to human odor and heat was also affected, suggesting CO2 might gate multiple cues that mosquitoes respond to.

In the IR family of receptors, different combinations of IR and co-receptor are thought to give flexibility in responding to a range of odors. In Drosophila, one of these co-receptors, IR8a, forms a complex with an IR that is responsive to carboxylic acids.  Ir8a is only expressed in the antennae of the yellow fever mosquito, whereas other co-receptors are expressed more widely.

After the studies of Orco and Gr3 mutants, attention has now turned to investigation of the importance of IR8a in detecting human odors.

A group of researchers, led by Matthew Deennaro, have recently published their investigation into the effect of disrupting the Is8a gene, with the CRISPR/Cas9 system, on the odor response of the yellow fever mosquito.

Initially they established that their mutant mosquitoes were no different to wild-type mosquitoes with respect to sugar feeding. They then undertook a variety of experiments to compare their attraction to acidic volatiles, including lactic acid; both in behavioural assays conducted in a uniport olfactometer and by recording their electrophysiological response using electroantennogram measurements.

Mosquitoes lacking functional IR8a co-receptors lost their response to lactic acid but were still able to detect other human volatiles.

The role of CO2 and heat

Human odor and CO2 both act as attractants to a blood source, but mosquitoes will not feed unless the blood is the correct temperature.  Experiments demonstrated that, when all three cues were present, wild-type mosquitoes fed much more readily than Ir8a mutants. Results from experiments eliminating one of these cues at a time led the researchers to hypothesize that it was the response to human odor, rather than the other cues, that was defective in the Ir8a mutants. This was confirmed using electrophysiology and behavioural assays. The addition of CO2 to the behavioural assays made no difference to the response of Ir8a mutants. Unlike the Orco mutants, they could not be rescued by adding CO2 to the assays.

Experiments with double Ir8a / Orco mutants and a Gr3 mutant showed that integration of host cues requires interaction between these pathways. The Ir8a pathway is an essential component of the integration, but Gr3 activation is necessary for host attraction to occur.

Lactic acid and other carboxylic acids form a major part of human odor and their detection may contribute to the favoring of humans over other vertebrates that we see in the biting behaviour of female yellow fever mosquitoes. This characterization of a member of the ionotrophic receptor family represents an important contribution to the furthering of our understanding of how mosquitoes smell us.