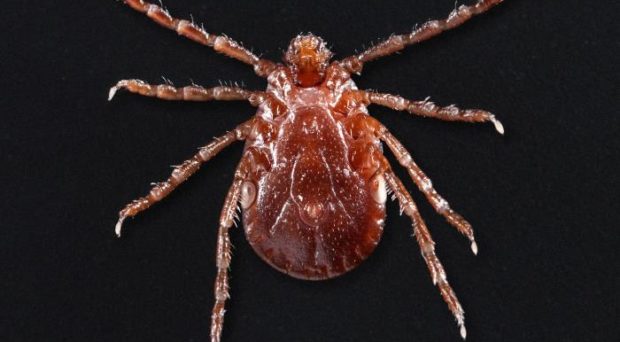 Last August I published a blogpost here on Bugbitten featuring Haemaphysalis longicornis (the Asian longhorned tick). In that blogpost, beyond the basic biology of this invasive tick, I discussed my efforts to predict the potential distribution of this tick in the United States, which I also published as a preprint on biorxiv. (If you have not heard of this tick before, please read that previous blogpost). Here, I will provide an update about what happened concerning this tick in the past six months since then, as well as give a personal perspective on my experience with publishing this preprint.

One of the benefits of preprints is that they make preliminary information accessible and available, even before they would be peer-reviewed and officially published. In my case, I used it for a slightly different purpose. The method I chose for my prediction was “quick and dirty”, basically extrapolating the climate envelope found in a published paper for this tick in New Zeeland to North America, assuming that the tick would behave the same in North America as it does in New Zeeland. This served the purpose of providing a preliminary prediction for my blogpost, but I was not comfortable with this method for a peer-reviewed publication. I was very conscious of this, and dedicated the discussion of my preprint to all the problems with the approach, and finished with expressing the hope that someone else will follow up with a more sophisticated methodology. Because I wanted to try out pre-prints, I chose to publish it as a pre-print instead of just posting it on my own website, with the idea that I would come up with a better method eventually that would make it publishable.

In this case, publishing the pre-print was very useful as it provided me with a connection to other researchers working on this same tick. Most importantly, it got me an invitation to participate in the national Haemaphysalis longicornis stakeholder calls, organized by the USDA APHIS Veterinary Services, who coordinate the surveillance and response to the introduction and detection of this tick in the United States. Participating in these calls, when I could, have been highly rewarding, getting some up-to-date information long before they would become public. The most useful among this information were updates called Situation Reports on detections at new locations for this tick. I was able to use this information to update and revise my pre-print twice, the last time in late October, with what was basically the complete record of tick detections for 2018. By this time, the Asian long-horned tick has been detected in 44 counties in 9 states along the Atlantic coast, and the first ever such tick detected was backdated to 2010. Detections up to September 2018 were documented in an article in the MMWR by Dr. Ben Beard and his colleagues. However, I still did not find a good solution for the conceptual problems of my approach, and therefore I did not submit my pre-print for publication to a peer-reviewed journal.

Early December, I received an email from a journalist at National Geographic, asking for my input on a soon-to-be published paper on the potential distribution of the Asian longhorned tick in the United States, which he attached! At first, I have to admit, I felt bad that someone else has published on this topic before me, even if I had my preprint. But then I read the manuscript, authored by Ilia Rochlin, who was exactly doing what I was hoping that someone will do. Instead of the climate envelope model that I used, Ilia used Maxent, a specialized maximum enthropy method to estimate the fundamental niche. He also incorporated detections of Haemaphysalis longicornis in its native range of China, Russia and Korea from the literature, whereas my model relied solely on the climate envelope established in New Zeeland, which is outside of the tick’s native range. Finally, he solved my biggest problem of extrapolating from the Southern to the Northern Hemisphere by using the climatic variables of the warmest and the coldest month, while I was stuck at using the same month that the study I followed used in New Zeeland. I actually contacted the author, congratulating him on his publication, and provided my comments for the article in the National Geographic. We corresponded for a while with Ilia, thinking about potentially collaborating on comparing predictions and identifying the counties where substantial livestock could become parasitized by this tick, and he mentioned another manuscript that was in the works on the same subject.

Indeed, through the working group at USDA APHIS, I received an additional manuscript investigating the potential distribution of Haemaphysalis longicornis in the United States. This one was written by the group of the Distinguished Professor Andrew Townsend Peterson at the University of Kansas, and collaborators from Japan, Australia and New Zeeland. These included Dr. A.C.G. Heath and K. Lawrence, whose research I relied on for my climate envelope model. This collaboration provided them with an even bigger and more accurate range of detections than what Ilia had from the literature. In addition, this second paper used a jackknife procedure (a resampling technique that leaves out a single observation when fitting a model) in Maxent to select the relevant climatic variables, whereas Ilia chose his climatic variables based on the literature. There were also other differences between the methods in this second paper and Ilia’s paper, which I am not qualified to evaluate.

Surprisingly, the predictions of these three models, including my own, are pretty consistent and similar. All three models agree that there are large parts of the United States that are highly suitable habitat for this tick, where it has not been found yet – so it has great potential! They also all suggest that the eastern United States, as well as the Pacific Coast, including the Northwest west of the Cascades, is highly suitable for the establishment of this tick. However, they differ in details such as how suitable areas in the Midwest are, and in particular, the paper by Peterson’s group suggest that eastern Washington, where I live, would be a suitable habitat, whereas both my and Ilia’s paper suggests otherwise. I guess this will be something that I will be able to test in subsequent years, seeing if this tick arrives in our area. One possible reason for the similarity between the predictions of these three models, including my own, is that they all rely on similar climatic variables, which have a particular distribution in the United States.

In addition to these technical papers, the public awareness, education and outreach about this invasive tick has also increased in the last 6 month, hopefully getting us ready to identify and control this invasive tick as it spreads further. Beyond the flurry of news articles, a series of materials have been published for the professional audience. An entire 1-hour webinar has been recorded and posted by the Northeast Regional Center of Excellence in Vector-borne Diseases about the biology, ecology, distribution and control of this tick, presented by Dr. Heath, Dr. Egizi and Dr. Falco. The same Center has also published a factsheet, and another has been published by the Virginia Cooperative Extension and the USDA APHIS. The annotated list of hard ticks in New Jersey has also been updated, and a pictorial key has also been published to help with identification. Finally, several outlets (such as the JAVMA) has published news articles for professional audiences.

During the winter, the national stakeholder calls were focused on planning for the upcoming season. Of course, with the federal government in partial shutdown for 5 weeks, that process was disrupted. Fortunately, activities on the ground are mostly done by state and local partners, but coordination by the federal agencies is important. This tick is considered to be established at this point at least in New Jersey, where all three life-stages (larvae, nymphs, adults) have been detected, but potentially across the Atlantic coast, and have been in the United States undetected at least since 2010. There is no reason to believe that they would not be able to overwinter, or could be eradicated at this point. USDA APHIS Veterinary Services is recommending passive surveillance, where suspect ticks, in counties and states where they have not been detected before, are sent to the National Veterinary Services Laboratories for confirmation. Up until now, none of the hundreds of Haemaphysalis longicornis ticks tested came back positive for any potential veterinary or human pathogens. However, they are well-documented vectors of several native and exotic pathogens. Studies are currently ongoing to test the vector competence of these ticks for some of these pathogens, results of which I am eagerly awaiting. In the meantime, the ticks are patiently waiting for spring, when they get the chance to spread further, and prove all of our predictions wrong.