Flowers and fruits are the symbol of a fourth anniversary. Source: Wikimedia Commons

Birthdays are a time for reflection as well as wishing for many happy returns. With this in mind, I am devoting this blog to our past and to our future.

BugBitten was conceived by members of the Editorial Board of the Journal Parasites and Vectors as an independent Blog for the Parasite and Vector Biology community. Kevin Tyler and Srimathy Sriskantharajah were important in its initial development.  When I joined the BugBitten team at its birth in September 2013, I was a late-comer to social media and had never read a blog, let alone written one.  It turned out to be a steep learning curve as I took over as coordinating editor shortly afterwards.

Our aim is to be entertaining and informative, providing news and views and highlighting new research findings that we hope will be of general interest to the community. Our target audience stretches from undergraduates studying Parasitology or Vector Biology through to experienced researchers and lecturers. We, therefore, try to keep jargon to a minimum and offer definitions, additional information and explanations via hyperlinks.

I firmly believe in the value of reading far beyond the immediate research topic to hand and know many ideas I have had originated in this way. The most popular topics for both bloggers and readers are medically related but, as co-ordinating editor, I try to steer us towards less studied, but equally fascinating, areas hopefully providing something new for even experienced parasitologists and vector biologists.

The first blog to be posted following our launch in late September 2013 was a discussion of the Altmetric score as a measure of the impact of scientific research.

Since then, as I hoped, topics have ranged far and wide. Topping the bill at the moment are blogs about vector insects, particularly mosquitoes.

As our regular readers will know, we aim to post a blog every week, usually on Fridays. During this past four years we have posted 216 articles, slightly exceeding our objective by occasionally posting two in one week.

Although it took some time for the parasitology and vector biology community to become aware of us, our readership grew steadily for the first three years and has shot-up this year with views per month very close to 17,000 this August.

One of the things that has surprised me most is the long shelf life of many of our blogs. Readers are still accessing blogs written as long as four years ago.

Statistics compiled by our technical team at BMC record an astonishing 20,945 views for our most popular blog so far, Rats are exonerated as reservoir hosts for the Black Death, posted by me in March 2015.  The blog highlights work by a Swedish group suggesting a modern co-dependency between climatic conditions, rodent population explosions and subsequent plague epidemics when populations crash and fleas move to infect humans. Using tree-ring data from locations across Asia they mapped climatic changes during the Middle Ages and hypothesise that each new wave of plague originated in Northern Pakistan and spread to Europe via the ancient caravan routes to the sea and then by boat to the ports of Europe.

The second and third most popular blogs since 2015 are Bed bugs become a new target of the wonder drug ivermectin with 5,356 views and Mites in your follicles with 4,925 views. The former, posted, in September 2016 by Krisztian Magori, one of the founder members of the BugBitten team of editors, highlighted the award of the Nobel Prize for Physiology or Medicine to William Campbell and Satoshi Ōmura for the discovery of ivermectin. The latter featured work showing how the type of mites you have in your follicles is determined by your ancestry.

It appears that interest in topics such as these extends far beyond our target audience and reflects the fascination most people display for all things to do with parasites. Something I was keenly aware of during over 30 years lecturing at Keele University.

As we move forward into our fifth year we would love to hear your opinion of BugBitten. 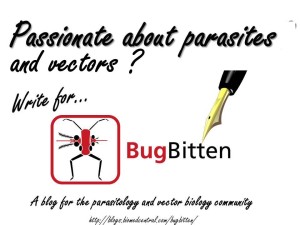 Are the blogs interesting and useful? Are we writing at the right level for you? Do you have suggestions we can use to improve the content or ideas of topics / particular findings you would like us to cover? Please write and give us your comments and we will be guided by you.

Finally, we are seeking to recruit new editors and frequent contributors.

We are a small friendly team of volunteer editors who write blogs, recruit new bloggers and help to edit each other’s work, ably assisted by the staff at BMC who host the blog. Several of our original editors are still posting blogs and have not lost their enthusiasm.