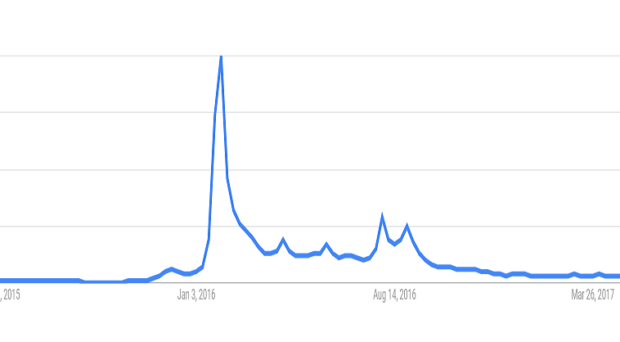 A year ago this time, the media was abuzz with news on the ongoing Zika virus outbreak and its potential association with microcephaly in Brazil and elsewhere. Since that time, public interest in Zika virus has substantially waned. Tourism in the Carribean and Latin America, which was anxiously anticipating economic costs due to Zika virus, is expected to increase again this year, with reduced concerns or awareness of the visitors in relation to Zika virus. While Zika virus has not completely disappeared, it is true that the reduced attention matches a similarly dramatic reduction in case numbers this year relative to last year. Following a 95 percent drop in the number of cases in 2017 compared to last year, the Brazilian government declared an end to the public health emergency due to Zika, which started in 2015. However, recent figures from PAHO depict a slight increase in the reported number of cases in Bolivia, Ecuador, Brazil and Peru, but nowhere near the levels during the height of the epidemic. In the continental United States, a mere 119 imported symptomatic cases were reported, as well as 495 locally transmitted cases on US Territories, particularly on Puerto Rico. Local autochtonous transmission has ceased in both Florida as well as in Brownville, Texas, and have not yet restarted. As far as we can tell, we do not have any evidence that Zika virus would have become endemic as West Nile virus did, finding reservoir hosts where it could circulate in an enzootic cycle. It looks like Neil Ferguson and his colleagues at Imperial College were correct when they predicted that Zika virus will burn itself out within 3 years, infecting a large number of people within a short time, and reducing the population that is susceptible to it below a level where it can no longer cause large outbreaks.

In the last couple of years, our knowledge on this previously obscure virus has greatly exploded. According to Web of Science, just in 2016, 1571 articles were published, and already this year, 629 has been published, with surely many more waiting in the review process. Among these many publications, we have understood the mechanisms by which Zika virus causes neurological damage in both mice and macaques, confirming it’s role in microcephaly. In addition, several papers provided solid evidence on antibody-dependent enhancement between Zika virus and other flaviviruses, particularly dengue, which helps explain the high proportion of microcephaly cases in Brazil, relative to the rest of Latin America. Cohort studies have established the relative risk of microcephaly and other long-term developmental problems for infants born to mothers infected with Zika virus during their pregnancy, which seems to be about 10%, at least for mothers with imported cases in the US. Several studies have investigated the potential role of alternative vectors, besides Aedes aegypti, in the transmission cycle of Zika virus. While they found evidence of substantial vector competence for both Culex quinquefasciatus, Aedes albopictus, and Aedes vexans, these fortunately haven’t turned out to be major contributors so far, possibly due to their biting preference for non-human animals. In the meantime, several vaccine candidates have been developed, in collaboration between public and private sector, which are currently undergoing clinical trials. Finally, a new study just published in Nature shed light on the evolutionary origin of Zika virus, and why it erupted when it did in Brazil in 2015. While we already knew that the Zika virus lineage spreading in the Americas was more related to the Asian lineage compared to the African lineage, we did not know why it spread so aggressively all of a sudden two years ago. In this new paper, Liu et al. describe how the Zika virus spreading in the Americas acquired a specific mutation from alanine to valine amino acid substitution at residue 188 in NS1, the non-structural protein 1, which facilitates flavivirus acquisition by mosquitoes from an infected host, and enhances viral replication within the mosquitoes. This amino acid substitution enhanced ZIKV infectivity in mosquitoes, which facilitated transmission during the recent ZIKV outbreak. This finding is reminiscent to a similar finding in the past about chikungunya in 2007 in the island of Reunion, which was able to be efficiently transmitted by Aedes albopictus due to a single amino acid substitution from alanine to valine in the envelope protein. Similarly, West Nile virus gained the ability to be more efficiently transmitted following an amino acid substitution from valine to alanine in the E protein. A pattern of adaptation among introduced mosquito-borne pathogens emerges.

Having assimilated all this knowledge, and seeing the reducing rates of reported Zika virus cases, we should surely be pleased and move on with our lives beyond Zika. Unfortunately, that would be too easy – see below my opinion on what will happen. Let me know if you disagree, I’m interested to hear your opinion!

Zika virus is a perfect example of a pathogen that produces a large epidemic and then seemingly vanishes from public perception. However, it will not vanish completely from the Americas, but it will probably join the long list of potential mosquito-borne pathogens circulating at low levels, such as yellow fever, chikungunya, SLE and many others. With diminishing media attention, more and more visitors will be unaware and unprepared, leading to rare adverse consequences such as microcephaly. With diminished attention will come a loss of funding, with large labs moving to the next big thing, in the search of big grants and flashy papers, and abandoning projects on Zika until it will come back. Federal and state funds for mosquito and disease surveillance, which were provided and/or promised during the Zika outbreak, will be gradually cut back, leaving the current underfunded and scattered mosquito control in place, unprepared for the next disease, especially in the current funding climate (e.g. in the US). Vaccine development will likely stall with the lack of a clear demand for the pharmaceutical partners, compounded with the difficulty of enrolling participants who are still immunologically susceptible to the virus. The only constant reminders of this outbreak will be the children born with developmental defects and their families who will be left to take care of them. Hopefully, longitudinal studies will continue to follow up on those children as they develop to see if and what long-term consequences they suffer. However, due to the cyclical nature of mosquito-borne diseases, this is probably not the last time we will hear of Zika virus. In 10-15 years, a new crop of humans will grow up, who have not been exposed to Zika virus before, providing enough susceptible hosts for the virus to infect again. And who knows what else we’ll face before then!