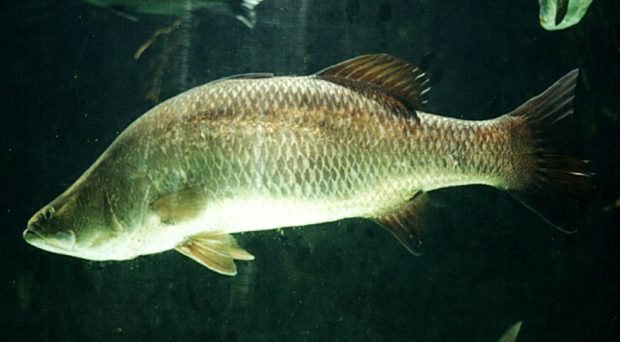 The Asian sea bass, the barramundi, is a favourite food source whose popularity is expanding beyond Asia. They are farmed commercially, used for recreational fishing and, when small, are regarded as an attractive aquarium fish. In addition to their commercial value they are a favourite food of the salt water crocodile.

A monogenean parasite of the Asian sea bass

Most of the group of flatworm parasites known as the Monogenea are small transparent ectoparasites living on the surface of fish. They have an anterior sucker and an organ at the posterior end, the haptor, used to attach them to their host.

Some of these attachment organs consist of elaborate arrangements of hooks and/or clamps that stop them being swept away by water currents.

Monogeneans have a simple life cycle with only one host and produce large numbers of eggs that are resilient to environmental challenges. A ciliated larval form, the oncomiracidium hatches out of the egg and searched for a new host.

Neobenedenia spp. are monogeneans that live on the surface of barramundi. They belong to a group of monogeneans that are highly virulent, causing damage to the epidermis of the fish on which they graze.

One would presume that searching for parasites that live on the outer body surface of their hosts (ectoparasites) would be easy, but not so if they are transparent.

They were interested in initial recruitment to the host and migration patterns of the post-larvae, juveniles and adults to see whether they aggregated in particular microhabitats at particular times. The problem of tracking these transparent parasites was solved  by labelling them with a fluorescent dye.

Barramundi from a fish hatchery were acclimated to salt water before exposing them to newly hatched oncomiracidia of the monogenean Neobenedenia, which had previously been held for 15 mins in seawater containing a fluorescent dye to make them visible under lighting of an appropriate wavelength.

Fifty fish were kept in individual tanks and each exposed to 50 oncomiracidium. The surface of the fish was then examined for the presence of parasites under an epifluorescence stereomicroscope at 10 time intervals between 15 mins and 16 days. The position of each parasite was mapped and the fish photographed.

Fluorescent labelling enabled the parasites to be detected easily, even when they were lodged under fish scales. Labelling lasted the whole 16 days of the experiment, although it did fade somewhat.

Some parasites were observed moving over the surface of the fish. They attached by means of their haptor and from this attachment point were seen tapping with their anterior end in a circle the length of their body.

The percentage infection success was calculated at different time intervals. Some oncomiracidia had attached on the host within 20 mins and this number rose to a peak of 93% of the number introduced into each tank by 24 hours.

At the same time intervals parasite distribution was analysed for complete spatial randomness to determine whether they selected to locate in particular microhabitats on the fish.

Initially distribution was random; suggesting attachment may occur at whatever location on the fish’s body the oncomiracidium first arrives.

The authors observe that some parasites attached under scales. This has rarely been observed for monogeneans. The fluorescent marker assisted the detection of this behaviour, which may have evolved as a protection from cleaner organisms such as fish and crustaceans that predate on ectoparasites of fish.

Aggregation began to occur after 48 hours as the post-larvae migrated to specific microhabitats. Although they showed no preference for a single microhabitat, aggregation was particularly prominent on the fins by day 8. Concentrations also occurred on the eyes, operculum and dorsal and ventral body surface. By day 12 parasites were randomly distributed again, but were more concentrated on the fins, head and ventral surfaces.

A possible advantage of microhabitat selection

One would suspect that parasites that collect in a particular sites would experience competition for grazing sites, so why aggregate?

Neobenedenia begin to lay eggs on day 9 post-infection, just after the period of aggregation. Although these monogeneans are hermaphroditic and cross-fertilization is not necessary to produce viable eggs, it may prove an advantage. The authors suggest that parasite aggregation just before egg-laying may provide more opportunity for mating. Parasites may then disperse for foraging or to find an advantageous site for egg laying.

They also point out that a new advantage of hiding under fish scales may be that these ectoparasites are likely to be protected from attempts to eradicate parasite in aquaculture systems. It is feasible that this behaviour will increase under the selection pressures imposed by widespread farming of the barramundi.