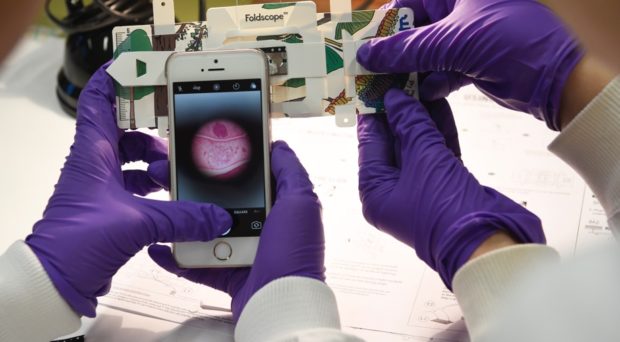 Foldscope, an origami microscope attached to a smart phone

Manu Prakash invented the Foldscope because he dreamed of worldwide equality of access to scientific tools.  Yet despite its simplicity, the Foldscope is a highly functional microscope that can be used to examine specimens on slides up to X 140 magnification with the standard lens (a tiny glass sphere that is mounted in a plastic cassette).

Although immunochromatographic tests (e.g. the rapid diagnostic tests for malaria, or others where positivity is signalled by the appearance of colour) are increasingly available, they can be associated with false positivity and in some circumstances are not useful (e.g. measuring malaria parasite clearance following treatment).  Visualisation of the disease-causing organism or associated symptoms in patient samples remains irrefutable, and as such microscopy remains the gold standard for diagnosis of many infections.  There are clear advantages to a microscope that can fit in your pocket and costs approximately one dollar, and the use of Foldscopes for medical diagnosis is under continued development.

However, the Foldscope has another, equally important, application in teaching. Public interest in science is growing. Encouraging people to explore the microscopic world, or ‘microcosmos’, with their own pocket microscope provides a hugely valuable opportunity to stimulate interest and engagement with the world around them.  Aside from the obvious benefits of a scientifically-educated public, less predictable benefits have arisen from the collaboration of scientists and ‘lay people’.  For example, in 2011, online gamers solved the structure of a retroviral protease that had been eluding scientists for over a decade.  They were playing Foldit, a game played by citizen scientists that exploits the human abilities of intuition and insight, which cannot be programmed by computing. Here, and now across hundreds of different subject areas, by presenting scientific conundrums as game tasks scientists tap into the hugely valuable resource of collective brain power.

Engagement between scientists and the public is extremely beneficial to both parties, who mutually learn from each other. The value of this interaction is highlighted by the major scientific research grant-awarding bodies now making a public engagement component of applications compulsory or strongly recommended.

schools at the London School of Hygiene and Tropical Medicine, focussing on the use of microscopy for disease diagnosis.  Having run similar sessions as a visitor to schools, I have found that it can be complicated to teach a microscopic subject without access to laboratory equipment.  As such, I wanted to trial the use of the Foldscope for visualising specimens, and gauge how interested teenagers would be when faced with making their own origami microscope.  Conducting the session in the Schools’ famous teaching laboratory was essentially a back-up, as desktop microscopes were available to see the specimens should the Foldscopes be unsuccessful. 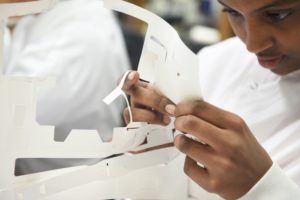 However, this turned out to be unnecessary.  Creating the Foldscope itself is a fairly challenging task, and the complexity served to increase enthusiasm – as did the reward of viewing malaria-infected brain sections.  Another crucial factor was the ability to connect a Foldscope (by magnetic strips) to the camera on a smart phone, which allows photos to be taken of the field of vision.  This opens the door to social media, and if you want to engage teenagers in science, encouraging them to use Instagram is a good starting point. It’s also possible to mount the Foldscope to the flash of a smart phone and project the image.

After spending half an hour thinking creatively and working together to build their Foldscopes, the students were able 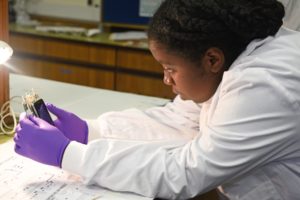 to find Chlonorchis sinensis (Oriental liver fluke) in the bile ducts of infected liver tissue sections, and spot malaria pigment and haemorrhaging in and around blood vessels in malaria-infected brain. Having access to specimens like these was great but not essential; individual Foldscope packs come with DIY plastic and card slides.  Prakash labs recently launched a Kickstarter campaign to enable distribution to one million people in 2017.  Whether microscopy is your field, your interest or your curiosity, it is now accessible for the cost of a dollar and a nice email.

Running sessions like these can sometimes seem like a lot of – arguably, unnecessary – work. But while they benefitted the students by providing a means by which to explore the microscopic world, and generated discussion and interest on the topic of disease diagnosis, they also benefitted the scientists who led the sessions.  Public engagement projects like this have allowed myself and colleagues to hone our ability to explain scientific concepts without jargon or over-complication. I have found that learning to deliver presentations that can hold the attention of school children has served me extremely well as an academic presenting to peers (hint: everyone likes kittens).

Scientists are increasingly realising that public engagement doesn’t necessarily mean mini lab experiments that prompt lessons in physics (cue someone makes ice cream with liquid nitrogen… although I do quite like that one…) – and as they do so, the boundaries that define public engagement are broadened and pushed.  And the more diverse the scientific community that embraces public engagement as a means by which to problem solve or refine the questions that they ask, the greater the rewards will be.

Ailie is interested in the biology and ecology of medically important insects, and exploiting aspects of this for novel methods of monitoring and control. She currently studies Musca sorbens flies for trachoma control on the Stronger SAFE project.