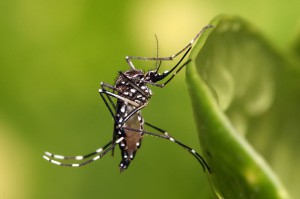 I assume that most readers of Bugbitten are very familiar with Zika virus itself as well as the ongoing outbreak in the Americas and Southeast Asia, which we covered in several posts ourselves (as well as countless others). However, despite the enormous coverage and information, there still remain unresolved questions about Zika virus and the risk it poses to us. One of the most important questions was related to the association between Zika virus infection and various birth defects in infants born to infected mothers, termed congenital Zika syndrome, which includes microcephaly, and the role Zika virus plays in the development of these birth defects. Congenital Zika virus syndrome is characterized by (1) severe microcephaly with partially collapsed skull; (2) thin cerebral cortices with subcortical calcifications; (3) macular scarring and focal pigmentary retinal mottling; (4) congenital contractures; and (5) marked early hypertonia and symptoms of extrapyramidal involvement. First, this association was based on both temporal and spatial correlation, namely that babies were being born with microcephaly in the same states of Brazil where a Zika virus epidemic has been going through previously. Since then, more and more research has focused on the potential mechanism by which Zika virus infection causes such damage. Zika virus has been shown to preferentially infect human neural progenitor stem cells in vitro, and replicate in them, leading to their apoptosis, cell cycle arrest and gene dysregulation. Experiments in vivo in mice have demonstrated that Zika virus is capable of crossing the placenta, vertically transmitting from mother to offspring, leading to fetal growth restriction and/or fetal death. Zika virus has also been shown to be able to infect neural progenitor cells in vivo in adult mice. In vivo experiments in pregnant macaque have shown similar results, with elevated viremia in the placenta and the fetal brain tissue. On the epidemiological side, a case-control study conducted in Recife, Brazil, with cases identified as babies born with microcephaly or related abnormalities, have found a strong association with the presence of Zika virus RNA or Zika-virus specific IgM antibodies. Finally, a prospective study also conducted in Brazil found that up to 20% of pregnant mothers with documented Zika virus infection had given birth to babies with some form of developmental abnormality. Unfortunately, the prognosis for babies born with congenital Zika virus syndrome is very poor. A separate prospective study following such babies found that most of them had abnormal brain activity. Their head circumference, relative to normal babies, unfortunately not only did not improve, but worsened, so they were falling behind even further relative to healthy controls. This was also true for babies that were born with no apparent microcephaly but probable congenital Zika virus syndrome.

The above recent findings seem to provide compelling evidence that Zika virus might indeed be responsible for causing congenital Zika virus syndrome. Based on this, and the widespread distribution of Zika virus in the Americas, the public health community was expecting to see a large number of babies being born with abnormalities. However, fortunately the actual number of microcephaly cases has been much less than expected, mostly remaining concentrated in northeast Brazil. The reason behind this discrepancy is still a mystery. One possibility is that women in many of the affected countries, such as Colombia, have chosen to delay pregnancy, or terminate pregnancies where Zika virus infection was suspected, reducing the number of babies born with abnormalities. Another possibility is that Zika virus infection is necessary but not sufficient to cause congenital Zika syndrome, meaning that some other factor is involved. One such factor could be antibodies left over from a previous dengue infection of the mother. In vivo experiments have demonstrated that IgM antibodies against dengue enhance Zika virus infection, due to the mechanism of antibody-dependent enhancement which also cause dengue hemorrhagic fever and dengue shock syndrome. Such a relationship could cause complications for the newly released dengue vaccine in the form of unintended consequences. However, dengue virus is also widespread in other countries in the Americas, so this effect might not explain the discrepancy between the geographic distribution of Zika virus infection and microcephaly cases.

While many researchers are trying to learn more about Zika virus and the damage it causes, many others are trying to come up with solutions to protect people from Zika virus or the mosquitoes that transmit it. Six different studies testing vaccines against Zika virus are currently registered on clinicaltrials.gov, in various stages of developments, but none of them passed into Phase 2 trials yet. Several existing drugs have been suggested to be repurposed against Zika virus, but don’t appear to be in trials yet. On the other hand, genetic control efforts are being pursued against the Aedes aegypti mosquitoes that transmit Zika virus. In Brazil, Oxitec is expanding their facilities in Piracicaba in Brazil to produce 90 million “Friendly” mosquitoes per week, protecting 3 million people from dengue, chikungunya, Zika and other viruses. At the same time in Rio as well as in Medellin in Brazil, the Eliminate Dengue team is scaling up their releases of Wolbachia containing mosquitoes. Similar approaches are being pursued against Aedes albopictus that could be a secondary vector for the same viruses. The Florida Keys Mosquito Control Board has recently approved the release of Wolbachia-containing Aedes aegypti in a 1 acre trial area in the Upper Keys. Next week, on November 8, voters in Florida will decide on whether or not trials can also go ahead with the “Friendly” mosquitoes of Oxitec.

The state of Florida is the right location for these trials as it is the only part of the continental United States where local transmission of Zika virus is still ongoing. Now in its 4th month, the outbreak shows how difficult it can be to control Aedes aegypti over a large and populated area, even in the United States. While the number of mosquitoes is expected to drop as we enter the winter months in the Northern Hemisphere, the future of Zika virus in the Americas is still uncertain. While some have predicted that the epidemic will burn itself out in a couple of years, and the Brazilian government is not expecting such a large outbreak during the coming summer, Thomas Frieden, the Director of the CDC warned that Zika virus is likely to become endemic in the Americas. Perhaps he’s right, if we base our intuition on two similar arboviruses, dengue and chikungunya, which certainly became endemic following their introduction.

While news coverage of Zika virus might decline during the coming months, we are likely to turn back to it in the Spring, when many of the babies of the pregnant women who got infected (e.g. in Puerto Rico) are due. Hopefully, we will have less babies with congenital Zika virus syndrome than we might expect, and perhaps by then, we will fully understand the cause of Zika-induced microcephaly. However, it’s likely that Zika virus will remain an ongoing problem in the Americas, joining dengue, chikungunya and many others. Therefore, this is unlikely to be our last post on Zika virus, and we will keep you updated on the developments regularly here at Bugbitten.