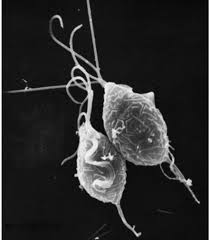 This bizarre looking pear-shaped organism is Trichomonas vaginalis, the single celled parasite responsible for the most common non-virally sexually transmitted disease in the world, trichomoniasis.

Humans are the only host for T. vaginalis and direct transmission occurs from person to person during sexual intercourse. The parasite reproduces by binary fission and there is no evidence of cyst formation. It is anaerobic, lacking a mitochondrion, and is an obligate parasite inhabiting the urogenital tracts of males and females where it moves around using four thread-like filaments called flagella.

In 2008, the World Health Organisation estimated that 276 million people were infected worldwide. To put this in context, in the United States alone 3.1 % of women between the ages of 14-45 are infected. Although most of these infections are symptomless, infection can lead to vaginitis, cervicitis or prostatitis and is associated with an increased risk of HIV infection and cervical or prostate cancers. It can also negatively affect the outcome of pregnancy.

How does it cause pathology?

T.vaginalis attaches to several types of host cells, such as those lining the vagina and prostrate (epithelial cells). The cells then lyse releasing nutrients for the parasite. How it attaches to cells and causes their lysis is poorly understood, though contact with the host cells is known to be required for their lysis.

If cell adherence is an initial step in eventual cell lysis it is likely that molecules on the surface of the parasite are involved in this process.  We know that the parasite is coated in lipophosphoglycan (LPG) molecules that bind to a mammalian protein on the cell surface called galectin-1. But if galectin production is knocked down in mammalian cells, parasite binding is only reduced a small amount. So this is not the whole story.

It has also been shown that T. vaginalis adheres specifically to vaginal epithelial cell by means of proteins called adhesins and cysteine protease enzymes have also been shown to be involved in cytoadherence and other aspects of pathogenesis.

In 2010 Patricia Johnson approached the problem by looking at parasite proteins. Her team identified proteins on the surface of six strains of T. vaginalis with varying ability to adhere to host cells. They found 11 proteins that were more abundant in the more adhesive strains and when two of these were over-expressed in less-adherent strains, adherence increased.

The role of rhomboid-like proteins

Recently, the Johnson group turned their attention to two T. vaginalis  rhomboid-like proteins. These rhomboid proteins are serine proteases located on cell membranes, with their active sites within the lipid bilayer. They cleave other transmembrane proteins and the products of the cleavage are usually released to the outside of the cell. They regulate a multitude of biological functions and, in other protozoan parasites, have been shown to cleave adhesion molecules.

Bioinformatic analysis revealed 4 rhomboid proteins likely to be active proteases in T. vaginalis. One of these, TvROM1 was shown to be located at the cell surface. TvROM2 and 3 were located to the Golgi apparatus and TvROM4 could not be located and was deleted from the study.

Searching for substrates for TvROM1

Hypothesising that the substrate cleaved by TvROM1 would be release from the surface of T. vaginalis, the Johnson group collected molecules released from the transfected parasites into the culture medium in the presence or absence of a serine protease inhibitor and subjected them to mass spectrometry. Quantitative proteomics and bioinformatics approaches identified two similar proteins as TvROM1 substrates with small amino acids surrounding the potential cleavage sites likely to be in the transmembrane domain. These proteins could not be cleaved by TvROM3.

By transfecting T. vaginalis so that the cleavage site of this substrate was disabled and could not be cleaved by TvROM1 the group showed substrate accumulation on the parasite surface. Attachment of mutant parasites to host cells was significantly increased, suggesting a direct role for this substrate in attachment. However, lysis did not increase, indicating additional factors are involved in host cell lysis.

This elegant series of investigations supports the view that a rhomboid protein located in the plasma membrane of T. vaginalis and its substrate have a role to play in the pathology of trichomaniasis. The authors suggest that TvROM1 cleavage of its substrate may signal an increase in adherent proteins on the parasite or host cell surface during the initial phase of binding.

Cell adhesion and lysis of host cells is clearly a complex process requiring multiple factors of parasite origin. The addition of rhomboid-like proteins to this list has widened the number of candidate molecules that could be targeted by multifaceted vaccines directed against T. vaginalis. So far the production of a vaccine against any protozoan parasite has eluded our community but perhaps this has taken us one small step further towards this goal.