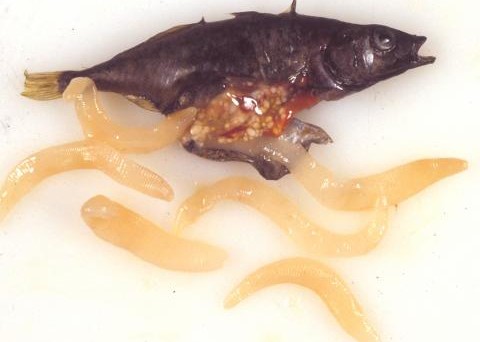 Nothing in nature exists in isolation. Every life form on earth participates in large networks or webs of interactions. From food webs to the carbon cycle we all unwittingly take part. Consider too how our bodies alone are hosts to organisms, all influenced by our day to day choices such as the food we eat, which then in turn influences our health.  It takes two to tango as they say. However, very rarely are there only two partners on the dance floor in nature. This often leads to cooperation or competition.

As hosts to multitudes of organisms every animal is a patchwork of interactions between symbionts and parasites that often have competing interests. But competition is not limited to organisms that are beneficial vs. ones that are harmful. In fact some of the most intense competition will arise between parasites both looking to exploit a host to its maximum potential.

In many snails this battle for host resources plays out when two or more species of trematodes, all of which require a snail as their first host, infect the same snail. They can out-compete each other by growing faster and consuming resources more quickly than the other, or they can even physically attack each other within the snail thus eliminating the competition. Competition between co-infecting parasites however is not always about host resources, often times these parasites use hosts as a vehicle to the next host in the life cycle. In this case the competition is for control of host behaviour.

This idea was experimentally tested using two species of parasite that both influence the behaviour of their copepod hosts, the tapeworm Schistocephalus solidus and the nematode Camallanus lacustris. Both parasites survive and move to stickleback hosts when the copepod is eaten. For the tapeworm this is a required step in the life cycle, but for C. lacustris sticklebacks are one of a number of paratenic hosts (hosts in which the parasite can survive but is not required) it can use until ultimately being eaten by perch. Previous work has shown that copepods harbouring not yet mature/infective stages of these two parasites are predated upon less by stickleback than uninfected individuals. In tests with S.solidus it was found that copepods are less active than usual until the tapeworm develops and becomes infective, after which host activity increases. They also found copepod activity correlates positively with stickleback predation meaning the parasite first suppresses host predation risk until it is ready to be transmitted after which it increases host predation risk. Although similar studies on C. lacustris infected hosts don’t exist, it is hypothesised that a similar pattern of manipulation would be found.

This sets the stage for competition within the copepod when one parasite is infective and the other not. In other words, both parasites will suppress host activity until they reach infectivity, after which they will increase it; however if one tries to increase activity before the other is ready we would expect them to block this, as being eaten before maturity results in death. This is exactly what researchers set out to test.

In order to create the conflict of interest, copepod hosts were exposed to either a single tapeworm coracidium (the ciliated infective larval stage) or stage 1 nematode larva at two different time points, day 0 and day 7. Whichever parasite was added first (day 0) would be become infective first and researches would look to see if the non-infective parasite (day 7) could suppress the increase in host activity as the first parasite reached infectivity.

Experiments were designed to test both intraspecific and interspecific conflicts. One experiment infected copepods with the nematode at both day 0 and 7. This tested if one nematode would suppress a member of its own species. The other scenarios tested interspecific competition adding nematodes first and testing if the tapeworms could suppress the nematode manipulation and vice versa, with the tapeworm added at day 0 and nematode at day 7.

With the match ups set the tests could begin. In each treatment copepods infected with only one species of parasite were also observed which allowed researchers to confirm that, on their own, each parasite is manipulating the host in the expected pattern: decreased activity pre-infectivity followed by an increase in activity after the required developmental time. This held true for each species and gave them a baseline of behaviour to test against. Activity was measured by simulating a predator attack and recording latency, the length of time until a copepod resumed moving and total movement for 15 minutes post attack.

yet-infective nematode could not suppress manipulation by the infective one. Activity was reduced until parasite one became infective after which activity increased, all while parasite two was immature and would be killed by predation.

In the case of an infective nematode (that had been added first) vs. a non-infective tapeworm it was again the parasite that was introduced to the host first, that appeared to dominate the conflict i.e. the tape worm could not suppress the increase in activity caused by the nematode reaching maturity.

Would this remain true when the order was reversed, indicating that whoever is first to reach infectivity wins the day? Or would it turn out that our nematode competitor, C. lacustris, would be able to suppress the manipulation of S. solidus? In the end nothing is as clear cut as that and this final trial yielded an intermediate phenotype in terms of manipulation.

This shows that, in this case, infective parasites will trump non infective ones almost every time. However, the nematode C. lacustris was found to be a stronger manipulator by being able to partially suppress the manipulation of the tapeworm S. solidus. In both cases the exact mechanism being used for manipulation is not known. In other parasites, encystment site, manipulation of the immune system or neuromodulation has been implicated in manipulation. Without knowing this information it is difficult to say why infective parasites win out. Either way, the consequences for the second one are dire, as being eaten before you are ready to infect the next host leads to death.

But lest we forget the real losers in this cruel world, the poor copepods who, no matter which uninvited guest they harbour, lose control of their behaviour and no matter when during their lifetime they are consumed have no chance to live on.

We all thought peer pressure was tough to deal with, imagine having two parasites compete for influence over your behaviour.