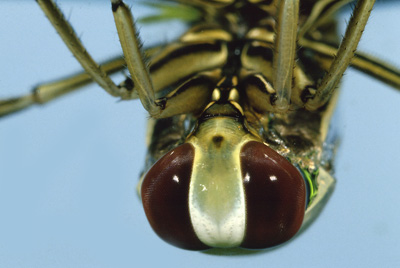 In a fantastic study, Roux and colleagues demonstrate that the presence of backswimmers significantly alters the life history of their malaria mosquito prey and leads to predicted decreases in malaria transmission. Using an epidemiological model similar to an SIR model, they show that backswimmers can decrease transmission in two ways. First, by eating mosquito larvae, backswimmers decrease the number of larvae surviving to adulthood and to potentially transmit malaria. This isn’t too surprising. However, through an elegant set of experiments, they also reveal “non-consumptive” effects of predation. Mosquitoes that grow up under threat of predation have an intrinsically different capacity for malaria transmission.

Roux et al. started out by working with field populations of Anopheles coluzzii (an important malaria vector in Africa) and its natural predator Anisops jaczewskii (a backswimmer like the one who stares us down in the image above). Larvae taken from field collected females were split into two groups. One group was reared in the presence of backswimmers and the other in a predator-free environment. What follows is an exemplary dissection and comparison of the vectorial capacity of these two groups.

First, they measured the effect of predator presence on larval development and the body size of emerging adults. Controlling for any differences in density, larvae living under threat of predation had a longer development time and, when they emerged, were significantly smaller than larvae developing in predator-free environments. While not explicitly demonstrated, it is very likely that the increased development time and reduced size at adulthood are due to predator avoidance behaviours in the larvae. Previous observations demonstrated that larvae under the threat of predation exhibit increased sheltering at the cost of feeding.

Other researchers (example 1, example 2) have found that such differences in larval diet can alter adult traits. Indeed, like the humans that developed during the Dutch famine study, Roux et al. find that immature environment profoundly shapes the physiology and life history of adults. Mosquitoes emerging from the predator treatments were significantly less likely to produce eggs from their first blood meal and when they did produce eggs, they were smaller. These females also had shorter lifespans.

Next, Roux et al. measure the ability of these two groups to be successfully infected with malaria parasites. Females resulting from the two predation treatments were offered blood meals carrying either live or heat-inactivated Plasmodium falciparum parasites obtained from locally acquired infections. They measured infection prevalence and intensity at multiple stages of infection. They find no difference in the biological competence of these two groups. Predator presence in the larval stage does not change the proportion of mosquitoes that are infected or the intensity of successful infections.

Here is where the elegance of good experimental design becomes clear. Roux et al. are able to not only assess the effect predation and the effect of infection alone. They are also able to look at the interaction between these as seen in the diagram. For example, when females were exposed to both live parasites and predators they were both significantly less likely to produce eggs and produced fewer eggs than when only exposed to predators or only to parasites. When survival was investigated predator-exposed and sporozoite infected females had the lowest survivorship. In other words, predation has important effects on mosquito reproduction and survival and in some cases these are exacerbated by infection.

The results suggest that populations of susceptible and infected mosquitoes that come from predator-free environments will have fundamentally different population dynamics compared to those that come from larval environments with predators. Differences in fecundity alter the overall size of the mosquito population which in turn alters potential contact rates with human hosts.  The decrease in adult longevity associated with predator presence in the larval stage decreases the proportion of the population surviving parasite development and becoming infectious. Combined with the consumptive effects, the presence of backswimmers was predicted to decrease the potential size of a malaria outbreak in a human population by 34%.

The field of ecology, most especially behavioural ecology, has been long dominated by the concept of trade-offs between different life history processes. In recent years, this idea, which has long pervaded in other fields, has finally begun to show up in the vector biology literature. Mosquitoes possess complicated and nuanced life histories. These complexities make these traits difficult to measure. For example, in this study, what if these females received multiple blood meals as opposed to a single one? Heat-killed pathogens illicit immune responses and potential costs in mosquitoes. What does this mean for the heat-killed parasite controls here? Moreover, these traits are often interrelated. Would predation additionally alter adult mosquito feeding behaviour? It is unreasonable to expect any one study to address all of these caveats. The questions above only emphasize the complexity of the dataset.

As small ectotherms, mosquitoes (and most arthropod vectors) are sensitive to environmental shifts. Accordingly, we would expect for there to be variation in vector traits and for trade-offs between different traits to be the norm. There has been a rash of studies in recent years demonstrating exactly this. Roux et al. have taken a key step forward by relating these traits and interaction between them to transmission. Improved understanding of these traits and their relationship to disease transmission will improve our understanding of the role of vector biology in transmission and our ability to predict transmission dynamics in a changing world.

Backswimmer is very active predator and I agree with the findings in this study and similar found in western Kenya http://www.parasitesandvectors.com/content/4/1/128