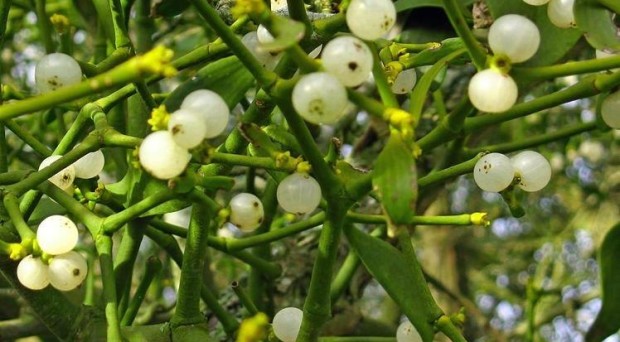 Closely associated with Christmas, mistletoe is the common name for the parasitic flowering plants belonging to the order Santalales [I am fairly sure that no pun was intended here] and there are many species of mistletoe. It grows on a wide range of host trees, though commonly apple trees, stunting the tree’s growth and often leading to its death.

Mistletoe seeds are passed from infected trees to new hosts by birds such as the Mistle Thrush. When a mistletoe seed first germinates, it is not parasitic at all, and the embryos that develop from a seed grow towards the trunk of the tree. The rudimentary root tip of an embryo penetrates into the bark and grows towards the conductive tissue. This can take years and, during this time, the mistletoe is reliant entirely on its own photosynthesis. However, once the roots reach the conductive tissue, the mistletoe’s parasitic nature emerges.

As mistletoe species also have the ability to photosynthesise, this technically makes them hemiparasitic, though the level of photosynthesis is so low in some species that the use of the term is merely academic. Conversely, other species actively photosynthesise and produce green leaves that can grow so much so that the mistletoe leaves becomes the entire ‘foliage’ of its host tree, reducing the tree simply to becoming a water supply channel.

So, if mistletoe harms so many species of trees, you might be wondering why then does it have such a good public image? Why are we not calling for its elimination as we are with other parasites? Surely, eradication of this parasite will ensure the survival of so many trees, the sources of food, homes and not to mention carbon dioxide sinks for the rest of the biosphere. Why are some people even campaigning to save mistletoe habitats? There are two main reasons: one is its cultural links and the other is its scientific importance.

As with malaria, the story of the mistletoe has been interlinked with human history for millennia. Unlike malaria, however, the mistletoe has been romanticised and deeply-rooted in the mythology and folklore of several cultures. In Norse mythology, Loki, makes the weapon used to kill Baldr, the son of Frigg and Odin, out of mistletoe. It is said that Frigg’s tears formed the berries of the mistletoe. In Greek mythology, a bough of mistletoe is used by Aeneas, the founder of Rome, to cross into and out of the underworld safely. In ancient Druidry, the mistletoe was said to have been worshipped reverently and is part of the Ritual of oak and mistletoe described by Pliny the Elder, in which mistletoe was cut down from an oak tree with a golden sickle to be used a part of various medicinal practices and rituals – this particular legend simply overlooks the fact that mistletoe rarely grows on oak trees. In the Middle Ages, the image of the mistletoe evolved and it was linked to fertility and vitality and, by Victorian times, the plant was firmly embraced as part of the whole Christmas tradition.

It is difficult to break centuries-old thinking and get people to turn their backs on the beloved mistletoe, but we may not want to. This leads me to the second reason why the mistletoe is not abhorred: mistletoe’s importance in ecology, conservation and possibly medicine.

Mistletoe has recently been recognised as a keystone species, meaning that it has a disproportionate impact on its habitat and plays a critical role in supporting the wildlife that exists in its ecosystem. Ironically, the mistletoe, whilst sapping nutrients from its host, is also itself a source of food for birds and other animals who eat its leaves and berries. It is also an important nesting site for birds and small animals.

Strange though it may seem, mistletoe has furthermore been shown to help seed dispersal in one of its hosts, the Juniper, increasing by ten to fifteen fold the amount of juniper berries that successfully sprout. This is because the mistletoe is a far greater attractant for birds and other animals (the dispersal agents) than the tree itself. Of course, more juniper shoots mean more potential hosts for the mistletoe, so there are benefits for the mistletoe here too.

Mistletoe is also important in conservation. In particular, the Mistle Thrush is under threat in Britain, so increasing or preserving  mistletoe plants could help with protecting the Mistle Thrush species in the country.

As I have mentioned previously, mistletoe was linked to the medicinal rituals of the ancient druids, but in more recent times, extracts from the humble mistletoe have been tested for the treatment of cancer. This is still being trialled and is not a recommended treatment (as noted in this NIH information page), but potentially some day it could possibly be.

It seems strange to say it, but it appears that a parasite can be good and mistletoe is an ideal example of that. Mistletoe has been courting good publicity and capturing the human imagination for millennia, and its significance in ecology, conservation and possibly medicine could only improve its already good image. However, I hope that in the future it may be better remembered for its scientific merits than the romanticised image it garnered in the past.