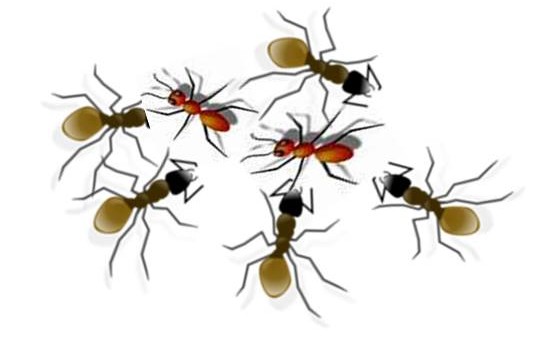 When Richard Dawkins explored the concept of the extended phenotype in the early 1980s he included parasitism in his discussions. Observations that parasites affect the phenotype of their host, causing morphological, physiological and behavioural changes are well documented and the idea that these changes are adaptive and enhance the chances that the parasite will be transmitted to the next host is much debated. But what happens when individuals are part of an integrated colony such as we see in the social insects? Can a parasite extend its influence beyond its actual host to the uninfected individuals that surround it, and who does this behaviour benefit, the parasite or the host?

Sarah Beros and colleagues have been exploring how individual ants infected with tapeworms may affect the behaviour of the whole colony.

An ant and a tapeworm

The tapeworm, Anomotaenia brevis, uses the ant, Temnothorax nylanderi (previously Leptothorax nylanderi), as its intermediate host. These ants live in small colonies within rotten wood and acorns that are found on the floor of temperate forests. They are preyed upon by greater and lesser spotted woodpeckers, the final hosts of the tapeworm. The tapeworm develops in the gut of the woodpecker and the tapeworm’s eggs are voided alongside the bird’s faeces. The ants collect these and feed them to their larvae.

The tapeworm eggs hatch and develop into larval tapeworms (cysticercoids) inside the developing ant. If a woodpecker feeds on these infected ants the tapeworm’s life cycle is completed.

Parasitised ants differ in appearance from uninfected ants. They are golden yellow, rather than brown, are smaller and have different body proportions. Their behaviour differs as they are largely inactive (click to see a YouTube video), not helping in the work of the society whilst begging to be fed. Although the infected ants are well tolerated, aggressive behaviour has been observed in colonies containing infected ants. In addition, the chemical composition of the hydrocarbons in their cuticle is altered.

Ants use variations in the quantitative profile of cuticular hydrocarbons to recognise their nest-mates as there is a common colony-odour. This may help in the recognition of intruders; an attribute that could be impaired if there is a variety of different odours in colonies containing infected and uninfected individuals. It was thus possible that the presence of a tapeworm in a member of an ant colony may affect not just the parasitised individual but the whole colony. Sarah Beros and colleagues have recently reported that this is so.

Acorns containing ant colonies were cracked open and shaken for 90 seconds to mimic attack by a woodpecker. They noted a significant difference in escape

behaviour, with infected ants being much less likely to evacuate the disturbed nests than uninfected ants. This suggests that infected ants are more likely to be caught and thus pass on the tapeworm when their nests are attacked.

Altogether, 114 colonies (parasitized and unparasitised) were used to test the effect of the presence of infected ants on the aggressive behaviour of the colony towards 4 non-nest mates (infected or not infected from a parasitized colony, from an uninfected colony or from a different but related species). Colonies were tested initially by placing frozen and then defrosted ants in the test colony one at a time and observing the behaviour of infected and uninfected ants. Aggressive behaviour included spreading the jaws, holding, dragging or biting the dead ant and occasionally stinging it, whilst non-aggressive behaviour included grooming and tapping with antennae.

Comparisons of the behaviour of naturally parasitised and unparasitised colonies revealed that parasitised colonies were less aggressive towards intruders of the same species, regardless of the source of the intruder.  Thus the presence of larval stages of the tapeworm A. brevis within some individuals did affect the colony as a whole.

However ants from all colonies were equally aggressive towards intruders of a different species and, overall, ants showed more aggressive behaviour to infected opponents than uninfected ones.

At the individual level

This tapeworm increased the lifespan of its host, thus increasing the potential time available for predation by the parasite’s final woodpecker host. This type of manipulation has been noted before (see a tapeworm / beetle association as an example from my laboratory). In addition, infection decreased host activity, as well as altering its appearance. These manipulations would also increase the likelihood of predation.

At the colony level

Levels of aggression were decreased in parasitized colonies.  Beros and her colleagues suggest the presence of infected ants increases the variety of odour profiles within the nest and thus lowers the aggression towards conspecifics. This may increase the tolerance of infected nest-mates but it will be costly for the colony if defence against intruding con-specifics is impaired.