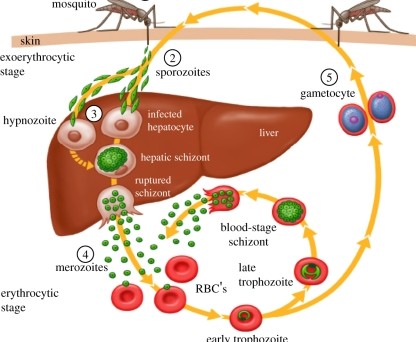 Life cycle of the malaria parasite: from vaccines-for-malaria, Wikimedia Commons

The reported drop in mortality from malaria in the past decade from over a million to just under 600,000 per year has been attributed to better diagnosis, the use of insecticide treated bednets and treatment with artemisinin-based combination therapies. However, concern regarding the sustainability of the latter is based on reports of growing resistance to artemisinin by Plasmodium falciparum (the malaria parasite that is responsible for the majority of deaths from malaria worldwide) that is occurring in the Greater Mekong sub region. The search for new antimalarial drugs is ongoing.

In the past, most antimalarial drugs have been directed at the parasite as it develops inside red blood cells (RBCs). However, the malaria parasite is probably at its most vulnerable just before it invades a new RBC as it is directly exposed to agents circulating in the blood.

RBC invasion occurs very rapidly after the release of the invasive stages, called merozoites, from previously infected RBCs. Invasion is a multistage process involving initial attachment to a RBC and orientation so that the apical end is touching the cell. A tight junction forms between the merozoite and the RBC and inward movement is driven by an actinomyosin motor. These stages require an array of proteins present on the surface of the merozoite and secreted from internal organelles called rhoptries.

No drug has been developed so far that would inhibit any aspect of this invasion process. However, a report recently published by Danny Wilson and colleagues suggests this is now feasible. The recent development of methods to collect and purify merozoites and to quantify invasion using flow cytometry have enhanced the ability to study the effect of potential antimalarial drugs on the invasion of RBCs in vitro and enabled this group to discover a new mode of action for a previously recognised group of macrolide antibiotics that act on the RBC stage of the parasite.

Two macrolide antibiotics in particular, azithromycin and clindamycin, have a good safely record for use with children and pregnant women and have an extremely long half-life in vivo.  They were already known to inhibit the synthesis of proteins in an organelle of the parasite called the apicomplast and to lead to death in a delayed manner whereby the parasite is able to complete one cycle of division inside a RBC, but dies during the following cycle.

Focusing on azithromycin, the group applied the antibiotic to parasites in culture with RBCs. They monitored its effect when added at different phases of the first and second cycle of invasion and growth, with or without washing away the antibiotic. Both flow cytometry and microscopy were used to observe the results. They also filmed invasion of new RBCs when the drug was applied just before the release of a new batch of merozoites.

Comparison of the inhibitory effect of the drug dissolved in 2 different vehicles showed that, when DSMO was used as a vehicle, the killing effect was 5-fold greater when the assay examined its effect on invasion, than when the previously recognised delayed effect on growth was monitored. This evidence suggested the azithromycin actually had two different modes of action.

Both flow cytometry and microscopy were used to demonstrate that when merozoites were exposed to azithromycin they were unable to invade new RBCs and no ring stages developed in these cells. Furthermore, by comparing the exposure of merozoites to the antibiotic for 10 mins with exposure of RBCs for one hour, the group demonstrated that it was the interaction of a merozoite with a RBC that was inhibited, rather than an event that occurred immediately after they invaded the cells and then encountered the drug.

Live cell imaging showed that azithromycin treatment affected the early stage of merozoite invasion when contact is first made with the RBC, preventing the formation of a tight junction. Examination of the structural basis for its invasion-inhibitory action revealed 2 glycan groups on the molecule were critical for this activity.

The establishment of the dual action of this drug makes it a much more promising candidate for further investigation than its initially recognised, slow acting effect, suggested. A drug that stops the parasite from entering RBCs is particularly attractive as it would both prevent the parasite causing the symptoms of malaria and also ensure none of the stages infective to the mosquito (gametocytes) could develop and transmit the disease to new victims. It is to be hoped further development of azithromycin derivatives occurs.