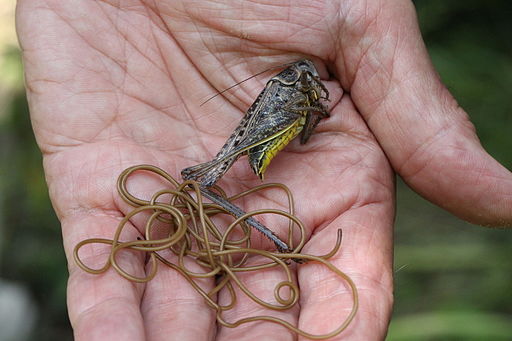 A horsehair worm from a grasshopper. Photo by: Alastair Rae https://commons.wikimedia.org/wiki/File:Horsehair_Worm_(14629048952).jpg

An extremely large group of tiny organisms has a huge impact on how ecosystems are regulated. Parasite communities often constitute the majority of all biomass in a given ecosystem with the potential of causing a ripple effect of changes throughout it. These constant companions of all animals are major players in ecology, e.g. from regulating the health and size of host populations to influencing community structure.

Some parasites, termed manipulators, have developed the ability to manipulate the behaviour of the hosts they occupy, further increasing their ecological role. For example, crickets parasitized with horsehair worms will commit suicide by launching themselves into pools of water at the behest of the worms inside, with the parasites bursting out on contact to look for a mate and reproduce.

Another sinister little parasite, an acanthocephalan,  causes its shrimp host, Gammarus, to occupy areas of the water column where it is most likely to be eaten by the next host in the life cycle, a fish. The uninfected shrimps meanwhile hang out near the bottom in the shadows creating essentially two different populations.

The exact mechanisms of this macabre mind control are not entirely understood but it is established that a complex suite of factors all influence the outcome the manipulation. Some of these will be host derived, parasite derived or environmental.

Manipulators have very demonstrable impacts on the structures of ecosystems but we often don’t consider how a changing environment will manipulate such manipulators themselves. Now, a recent review by Sophie Labaude and colleagues tackles how changing environments will influence the outcomes of this host manipulation, which will in turn have effects on the ecosystem as a whole. For example, many pollutants end up in rivers and streams including residues from our multitude of pharmaceuticals. The review points out that medicines meant to alter our serotonin system may end up interacting with the serotonin system of Gammarus, which is known to play a role in its susceptibility to the mind altering effects of its acanthocephalan parasite.

The most talked about environmental change is of course global climate change and the warming of the planet. Warming temperatures may allow some species of parasites and the animals they use as vectors to colonize new habitats. These new arrivals will have immediate impacts on the local ecosystems but warming temperatures can also play a role in influencing the outcomes of manipulation. One of the most spectacular examples of host manipulation below has a rather sensitive temperature dependent component.

Dicrocoelium dendriticum is a small liver fluke found throughout Europe, North Africa and North America. The lancet liver fluke, as it is known, has a complex life cycle that begins in a snail and ends in the liver of grazing mammals.

The spectacular part is what happens when the parasites get inside of an ant. The majority of the parasites ingested remain in the abdomen but a single individual wriggles its way up to a large bundle of nerves below the ants jaw and wraps itself around. Ants with a brain worm will then climb up vegetation and cling on, remaining there awaiting accidental ingestion. That alone is an amazing story but this system is even more unique, because the parasite turns the manipulation on and off throughout the day, mainly driven by the rise and fall of daily temperature.

Infected ants are only found clinging at temperatures below 18 C. This is presumably because at higher temperatures an exposed ant would dry out and die, meaning the worm would lose its temporary home. As global temperatures rise might we see an end to clinging ants with worms in their brains? The window of time available to sit and wait to be eaten may get smaller indeed.

A rancher or hunter who relies on the final mammalian host might welcome the absence or reduction of liver fluke transmission but, as mentioned before, parasites can have important roles in ecosystems. What if Dicrocoelium is acting in a manner that keeps local ant populations in check? It surely won’t be the only factor regulating ant populations, but it could play a role. We can think of this from a host’s perspective, too, and think about how mammals’ feeding habits might change in an altered environment. Will they graze the same areas? Will they shift the types of plants they are eating such that they would coincidentally avoid the ingestion of the ants? What if there are no more plants for ants to cling too?

Human impact reaches nearly every corner of the planet and all of its ecosystems. The cascading effects of this impact will topple the house of cards of some natural communities and it may start with subtle changes to the largest groups of organisms living in the smallest of places, like the brain of an ant.